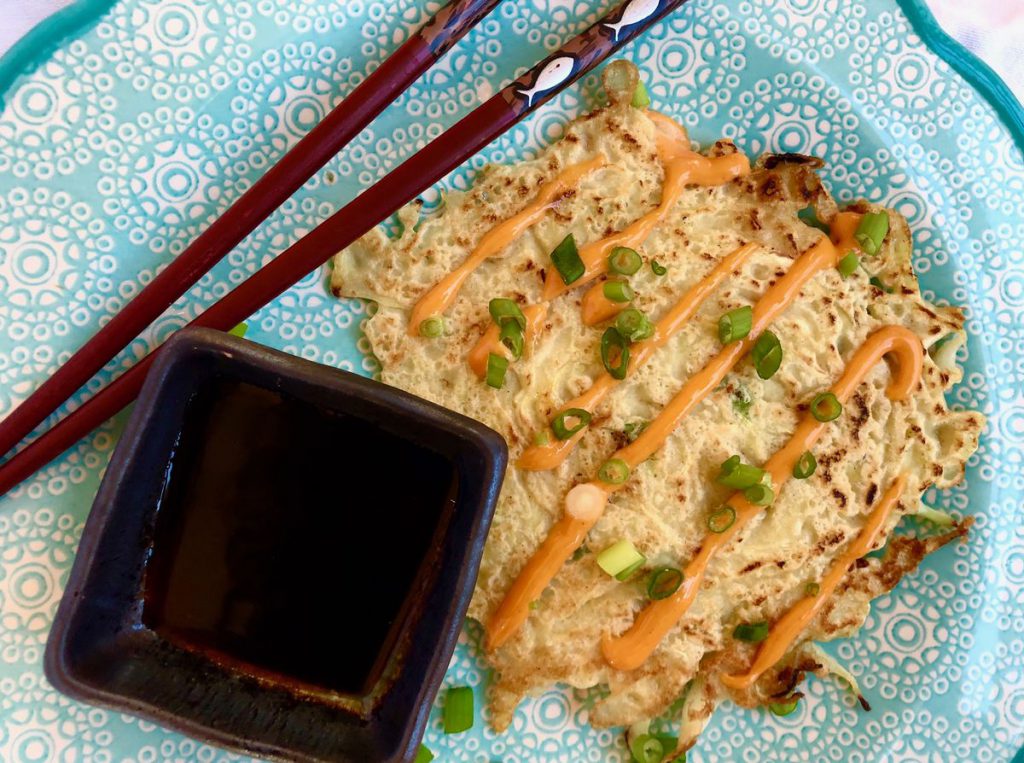 There’s something sobering when the local vegetable supply starts to dwindle down to roots and the cabbages, isn’t there? Oh, cabbage. Cabbage keeps it super real. (Is there anything less sexy than cabbage?) There are only so many things you can do with the stuff. Tacos. Soup. Cabbage rolls. You can also make some highly satisfying Japanese savory pancakes, also known as okonomiyaki. Don’t let their cabbage-ness freak you out. They are a total crowd-pleaser.

Cousin Em, who has a small farm in Homer, brought me a couple heads of cabbage this week and I set about experimenting with pancake making. The recipe I came up with is really simple but can be tricked out in any number of ways. It stands up to condiments and garnishes well.

I might add some bacon crumbles to the batter, for example, and garnish with scissored nori. Or make a dipping sauce with tamari, sesame oil and red pepper flakes. Or dress it up like sushi with pickled ginger and wasabi mayo.

After I settled on my recipe, I sliced mine like a quesadilla and served it as an appetizer with a couple dipping options. The kids loved it. Dude: The kids ate cabbage.

It calls for white flour and rice flour, but it is almost easier to sub in a gluten-free flour mix that uses rice flour.

Whisk egg, water, salt and ginger paste. Add flours and whisk until smooth. Add cabbage and onion to make a very loose batter. Spray a cast-iron skillet and put over medium heat. When the pan is hot, spoon a quarter of the mixture into the center of the pan, forming a pancake about 5 inches in diameter. It will be messy around the edges, but you can push the stray cabbage threads into the circle of batter with a spoon. Allow to cook on the first side until the bubbles in the batter pop and don’t fill in, about two minutes. Flip with a metal spatula and cook for an additional 2 minutes on the other side, until it’s golden. Serve right away with sriracha mayonnaise and sprinkle with green onion and sesame seeds, and soy sauce on the side.