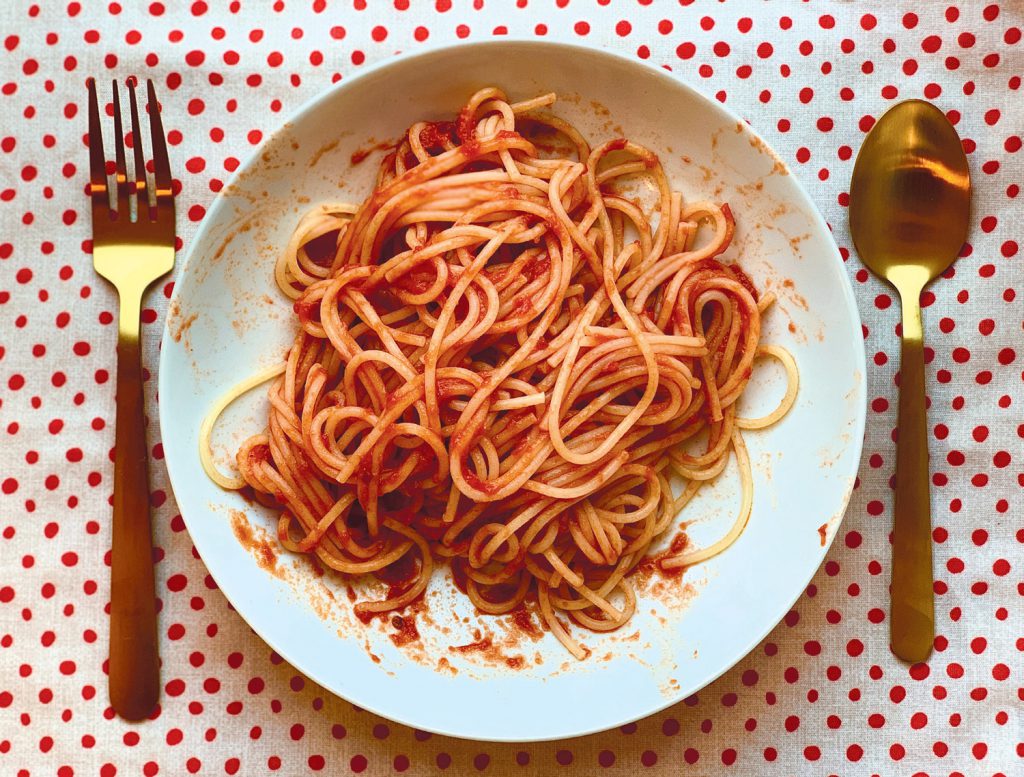 Down in Juneau on 2nd Street sits a building where dough has risen almost every day for the better part of 100 years. Gustav H. Messerschmidt, a German immigrant, built it in 1914. His family operated the San Francisco Bakery there. Next it became Purity Bakery, until 1980. Silverbow Bakery followed, maybe the best place in the state to get a bagel for 18 years or so. Now it’s home to an Italian restaurant called In Bocca Al Lupo. Most days you’ll find chef Beau Schooler and sous chef Rachel Carrillo Barril in the kitchen, curing charcuterie amid bubbling pizza dough and nests of fresh pasta curled tightly in the fridge.

Beau is tattooed from ankle to ear. He’s fond of crazy ideas and giving no f@$ks. Rachel has short hair and horn-rims. She’s quiet, linear, scientific almost, and super game. Together they make a maniacal food team. I’ve eaten plates they made that felt sacred. I think immediately of salmon head, collar, and belly cooked in the 700° F wood-fired oven until its skin was crispy and its flesh soft as custard. But it’s the pasta pomodoro I keep going back for.

On the face of it, the dish is super simple: fresh pasta, a red sauce. But it does something to you. You eat it. Then you think about it. And you have to eat it again. Part of it is their homemade pasta, sure. But the sauce also has an unusual umami that just turns up the volume and hooks you like the chorus of your favorite song. It comes from a secret ingredient: white miso, which contains high amounts of glutamic acid and salt. White miso isn’t the flavor heightener MSG, but it’s a natural cousin, and it makes the sauce low-key extraordinary.

It’s been months since I slurped down a bowl of Bocca’s spaghetti. The other night, though, I wanted some so badly, I tried to recreate something like it. I added miso to a version of Marcella Hazan’s famous simple sauce with butter and onion that I make all the time. It lacked the magic of sitting in Bocca’s dining room, but it captured a bit of that Lupo melody, and I think it’ll get me through till I can get on a plane back to Juneau.

A note on the sauce: It’s concentrated and meant to be tossed with pasta, more on the order of how you might toss pasta with pesto. It’s not ladled on top the way you might do with meat sauce.

A quick note on pasta: If you can’t use fresh pasta, use quality spaghetti. Salt the water. Don’t put the pasta in until the water is boiling. Set a timer and don’t cook it a minute longer than the package directions indicate; maybe opt for 20 seconds less.

Spaghetti sauce with a secret

In a heavy-bottomed pot, combine tomatoes, onion, butter and miso and simmer on medium-low heat, stirring constantly, until sauce is thick and concentrated.