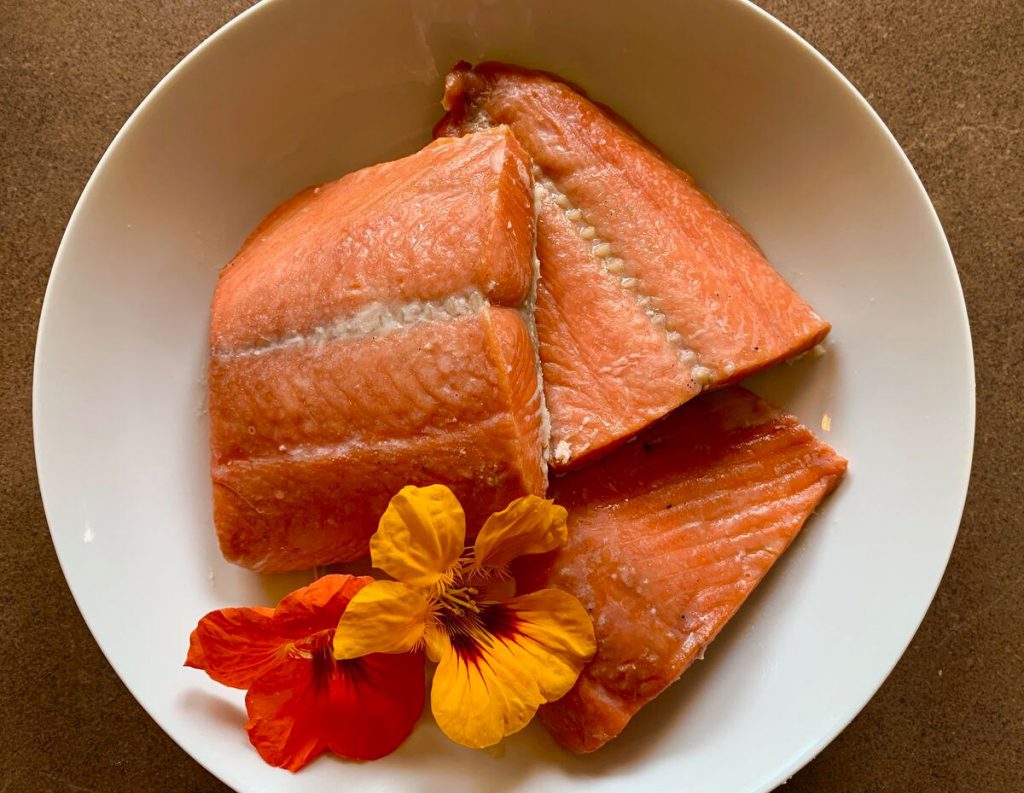 I smoked salmon in my uncle’s old Little Chief out on the driveway all summer, searching for the best, most straightforward technique for beginners to get a consistent fish out of an inexpensive electric smoker. In my research, I talked to old-timers, chefs, fishermen. I dry-brined with different ratios of salt and sugar and garlic. I wet-brined with combinations of wine, tabasco, soy sauce, demerara sugar, sea salt and fresh herbs. I tried smoking it once the way my uncle does, with a cardboard box over the smoker.

The thing about smoked salmon in Alaska, it’s just so dang personal. Some people like the salt, some like the sweet. Some can tolerate it really dry, while other people can’t. The recipe I settled on is solid and simple. It’s based on one found in a small spiral-bound book called “Alaska’s Gourmet Smoked Salmon Secrets Revealed.” It’s the preferred recipe of my Aunt Barbara, a master fisherwoman. She told me it wouldn’t fail me, and she was right.

A few notes: this recipe uses smoke more as a flavor, not as a cooking method. Instead, it calls for finishing the fish in the oven. Electric smokers, especially when it’s cool, can’t get hot enough to bring the fish to temperature. I prefer this method because it’s both faster and it keeps the fish from getting too dry. In general, you should avoid smoking fish in the rain or when temperatures get below about 45 degrees.

I use alder chips, which you can get just about everywhere. Double this recipe for a Big Chief. Make a plan for what you’d like to do with the salmon after you smoke it. Easiest is to vacuum seal and freeze. It keeps about a week in the fridge.

In the evening the day before you plan to smoke fish, begin the brine. In a large container, like a deep soup pot, dissolve white sugar and salt into the water. Using good deboning tweezers, remove the bones you can feel and see. Take care not to damage the fillet in this process. With a sharp knife, trim any rough edges and cut each fillet into four pieces, three rectangles and the tail. Add to brine and refrigerate overnight.

In the morning, remove the fish from the brine and rinse each piece well, holding it under running water for at least five seconds. Pat each piece dry with a paper towel, and place, not touching other pieces, on a wire rack on top of a cookie sheet. Aim a small fan at the rack and allow the fish to dry for 6 to 8 hours, until it’s just a little tacky to the touch.

If you like it a little sweeter, rub each piece of fish with a tablespoon of brown sugar. Load the smoker, four pieces to a tray. The pieces should not touch. If the skin is still moist, pat it dry with a paper towel. In a dry outdoor location, plug the smoker in and fill the smoking pan with alder chips. Smoke the fish for two hours, checking the pan halfway through and adding a few more chips if necessary. Toward the end of the smoke, preheat the oven to 175 degrees. Remove the rack from the smoker and unload the fish, carefully peeling the skin off each piece. Set the pieces, not touching, on a large parchment-lined sheet pan. Bake for one hour — you may want to remove really thin tail pieces earlier — until firm to the touch. To store, can or vacuum-seal and freeze as soon as fish has cooled.