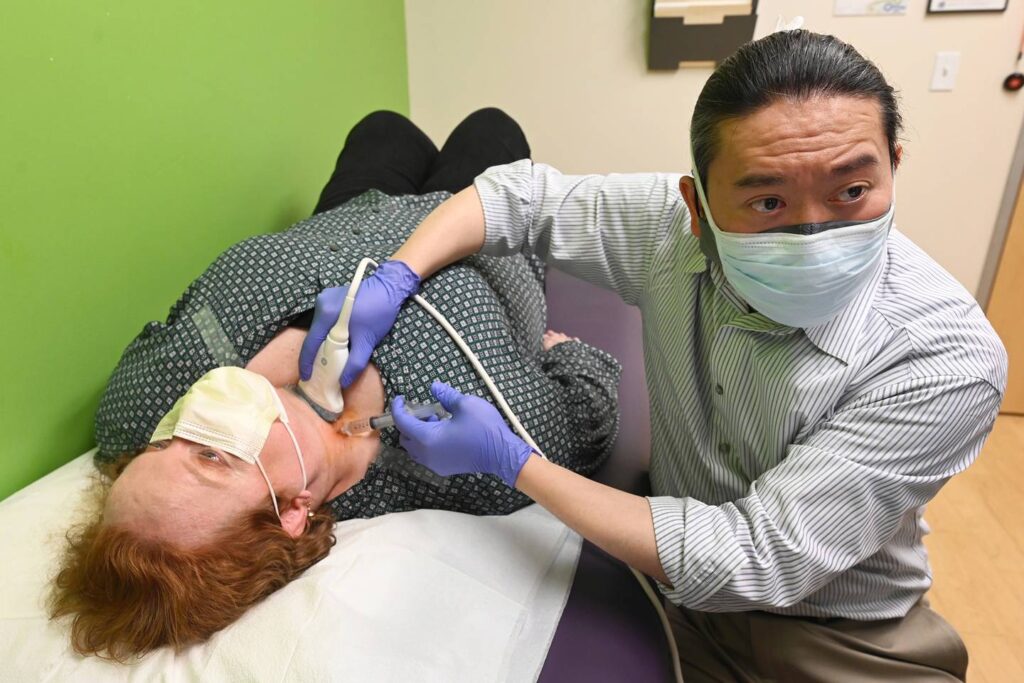 I spent that last part of 2022 following Anchorage doctor Luke Liu and some of the Anchorage patients he treats who are suffering with complicated cases of long COVID. I’m still thinking about the stories I heard from people I interviewed about life-altering problems that came after even mild infections.

One of the themes that’s come up a lot in my reporting about culture in pandemic times is innovation. In this case, Dr. Liu has been trying a novel treatment for long COVID symptoms. He was awarded a grant to fund a pilot study out of his Anchorage office. His most fervent advocates are the patients he’s successfully treated.

Here’s how the story begins:

On a recent evening inside an office at Alaska Regional Hospital, Dr. Luke Liu watched an ultra thin needle move on an ultrasound screen as he guided it into the neck of his patient, Becky Hallstrom. Gently, he pushed the plunger, releasing a numbing agent called bupivacaine.

His needle’s target: a collection of nerves known as the stellate ganglion. His goal, using a treatment that will soon be part of a pilot study, was to help Hallstrom get closer to the life she had before a COVID-19 infection turned it upside down.

Liu, an anesthesiologist who specializes in complicated pain and nerve problems, has become a doctor of last resort for hundreds of Alaskans — and a growing number of patients from Outside — suffering from disabling conditions that started after they were infected with COVID-19.

The 300 or more people with long COVID who have appeared in Liu’s waiting room have an array of crippling problems. Among them: fatigue, cognitive issues, persistent loss of taste and smell, tinnitus, depression, breathing, mobility and cardiac issues. Most are frustrated and desperate, having been to many other doctors without successful treatment. People have fainted in his office. They have hobbled in with canes. Two patients lost feeling in their throats and lacked gag reflexes. One man didn’t recognize his wife. Another didn’t recognize his co-workers. Others, people born in Anchorage, can’t navigate the city anymore without GPS.

“We are talking about people who before COVID, they were athletic, pretty much at the top of their career, they hiked, they could do everything,” he said. “Now they’re in bed, they can’t do very simple cognitive things.”

In treating them, he says he’s made some discoveries he hopes might help other patients. He’s among thousands of doctors working to define and treat long COVID, which the government estimates impacts between 7.7 million and 23 million Americans, including a million who can no longer work. The state doesn’t track long COVID, but a University of Alaska survey released in August found one in three Alaskans who said they were infected with COVID had long-term health effects.