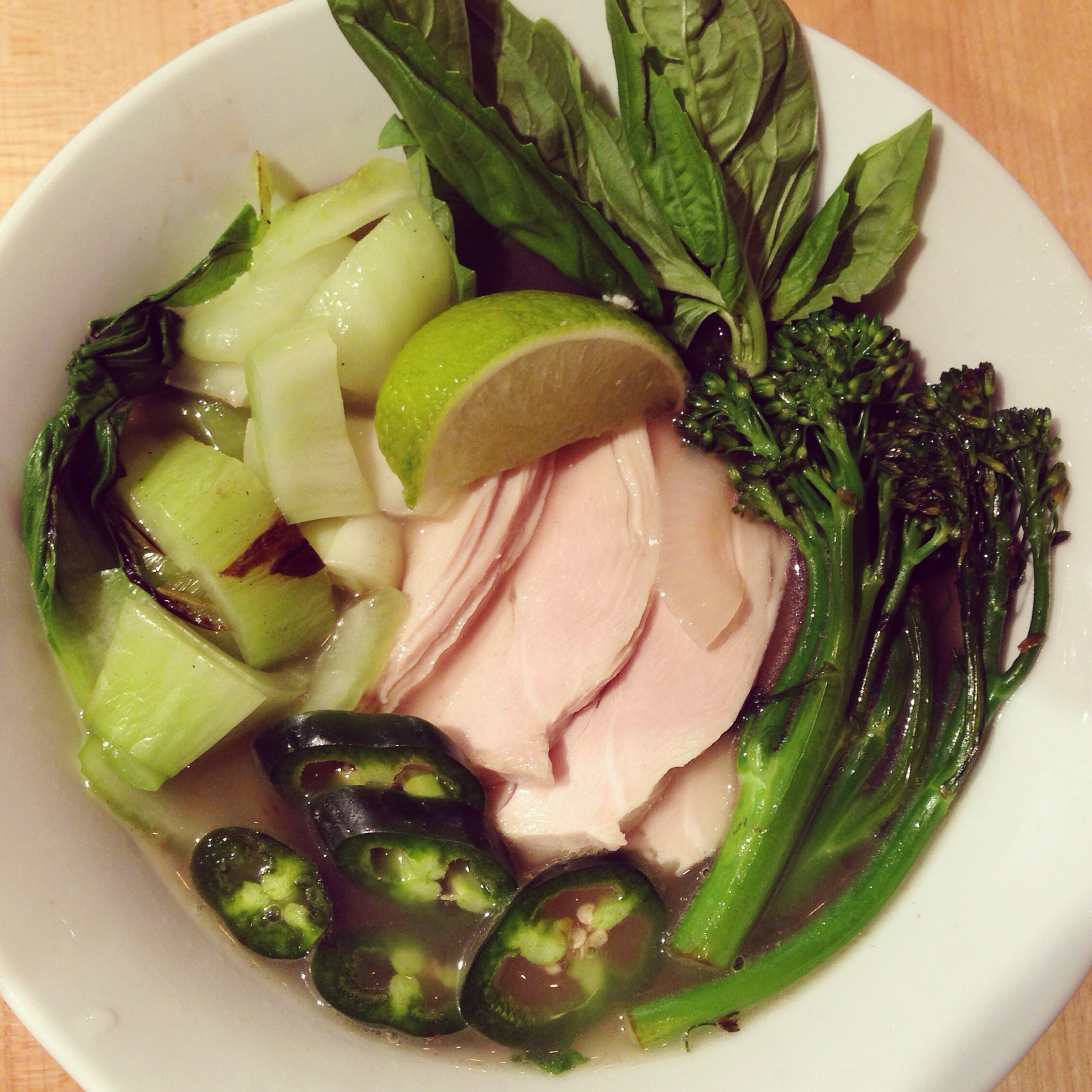 I’m all pied out. I’m also through with cheesecake. And pumpkin flan. And cornbread stuffing. And my stepmother’s pate. And cheese. So much cheese. I can feel my arteries closing as I type this. I can barely look at this picture of the turkey I was once so excited about. 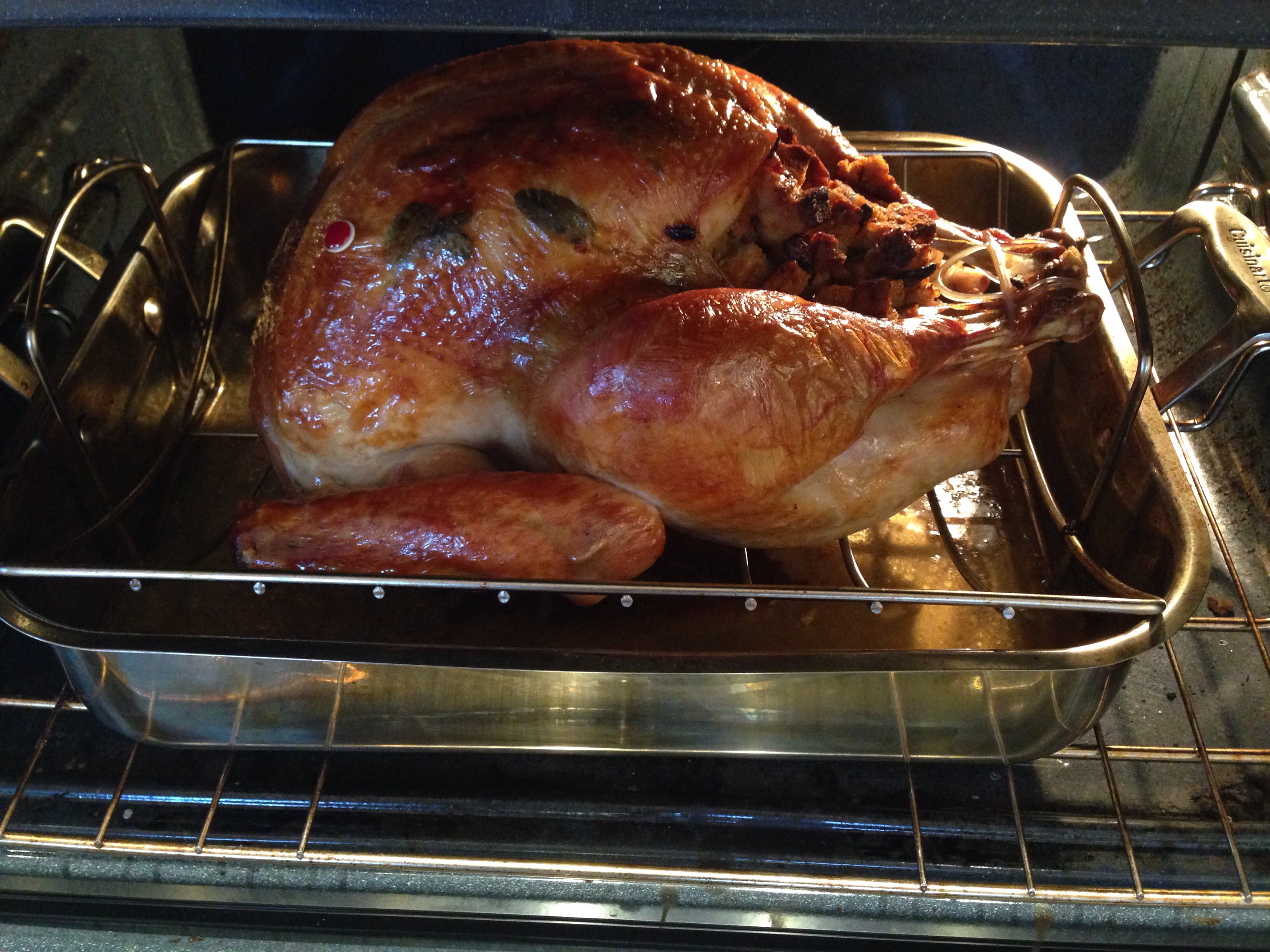 The ghost of the above turkey haunted me all weekend. Of course I dutifully put the carcass in a pot Thursday night and made stock, planning to make soup. But then my mother brought me some turkey soup she made from her turkey. And I ate it for two meals. (My dad then invited us over for more turkey soup, but we politely declined.) My stock continued to sit in the fridge with all the Tupperwares of leftovers, quietly pressuring me.

I was driving through Spenard in the snow yesterday, thinking about how all I wanted was a big bowl of spicy, salty non-Thanksgivingish soup, when I passed a Pho Lena and got an idea. Turkey pho. How hard could it be?

The hardest part of making pho is the broth. The Vietnamese soup is traditionally made with slow-cooked beef bones and a mixture of spices. To make a turkey approximation, I headed to New Sagaya City Market’s spice aisle. (Warning: it was kind of expensive. Fred’s or Red Apple is probably cheaper, FYI.) I decided on whole coriander, cardamom pods and, most essential for that familiar pho taste, star anise. If I would have been able to find fennel seed, I might have added that as well.

At home, I toasted the whole spices along with a cinnamon stick. 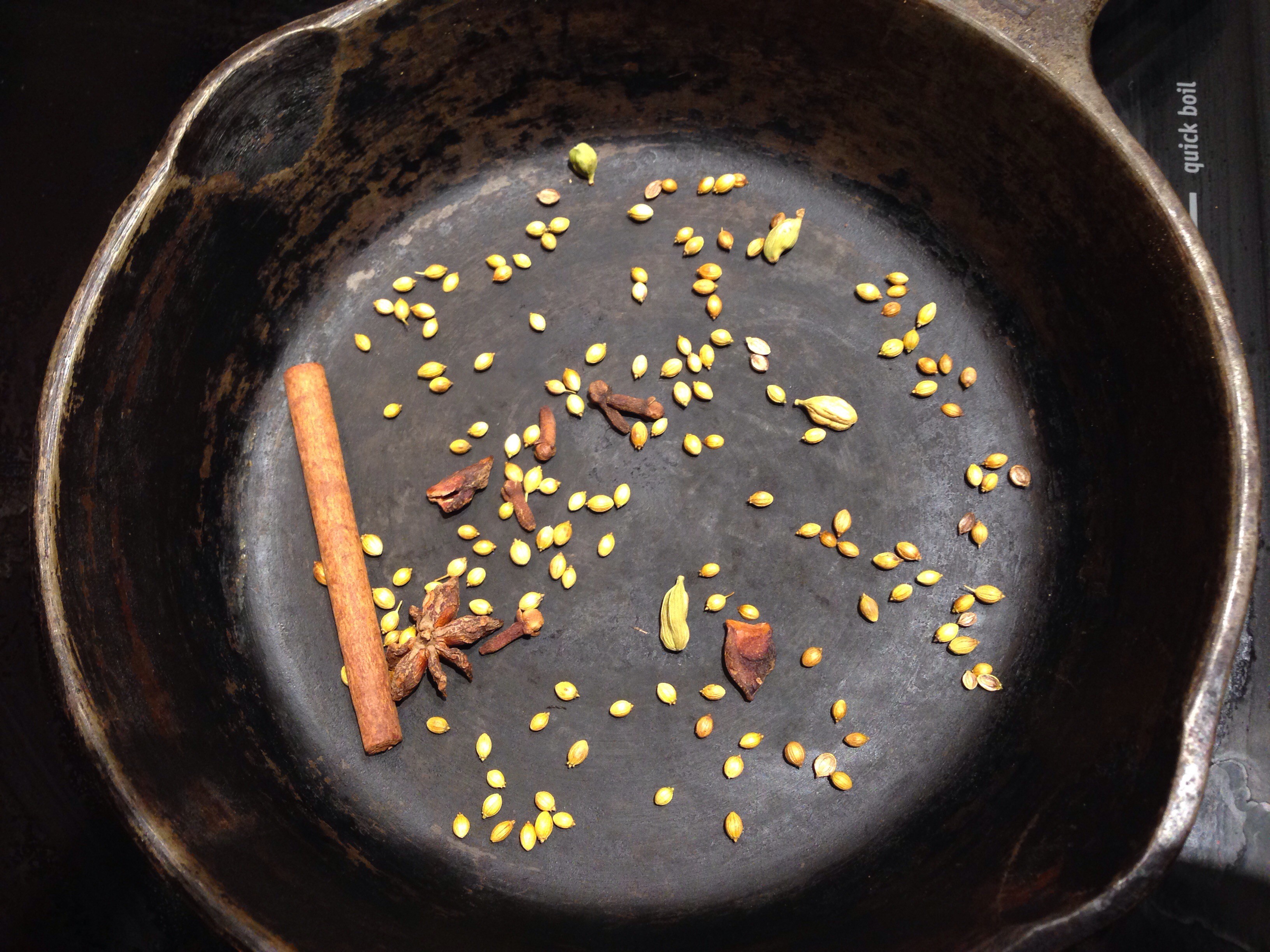 (If I had been thinking, I wouldn’t have done it in a cast iron skillet and instead would have used the dutch oven I was going to make the soup in. You should do that and save yourself the dish to wash). I gathered up all the spices and put them inside a mesh ball I usually use to make tea. If you don’t have a tea ball, you could use some cheese cloth, or just toss the spices in, but you’ll have to avoid eating them later.

Next, I thinly sliced half an onion and peeled and chopped a 3-inch piece of fresh ginger. I put it in my dutch oven with a drizzle of olive oil and lightly fried it. 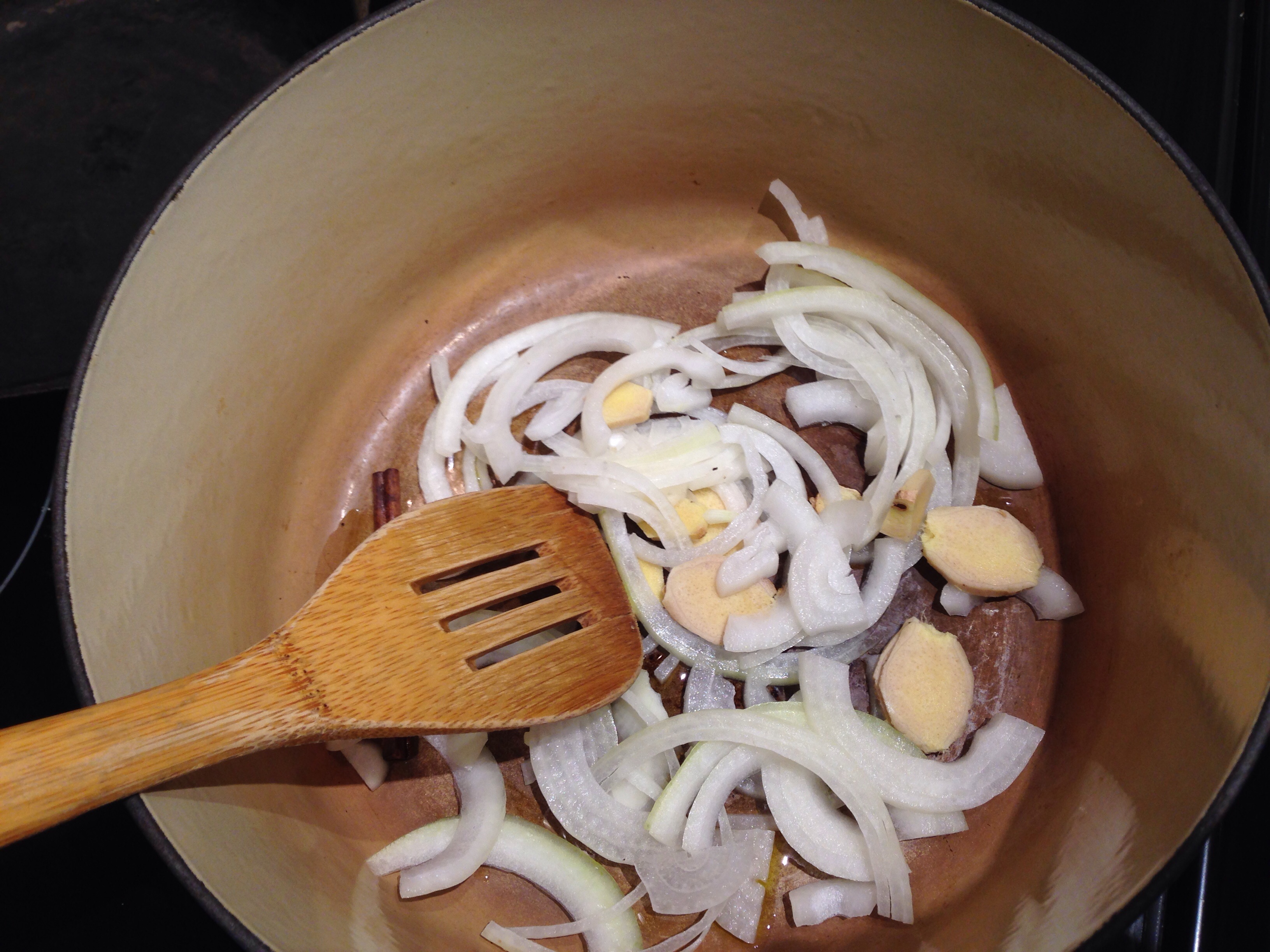 After that, I poured in about 10 cups of stock. 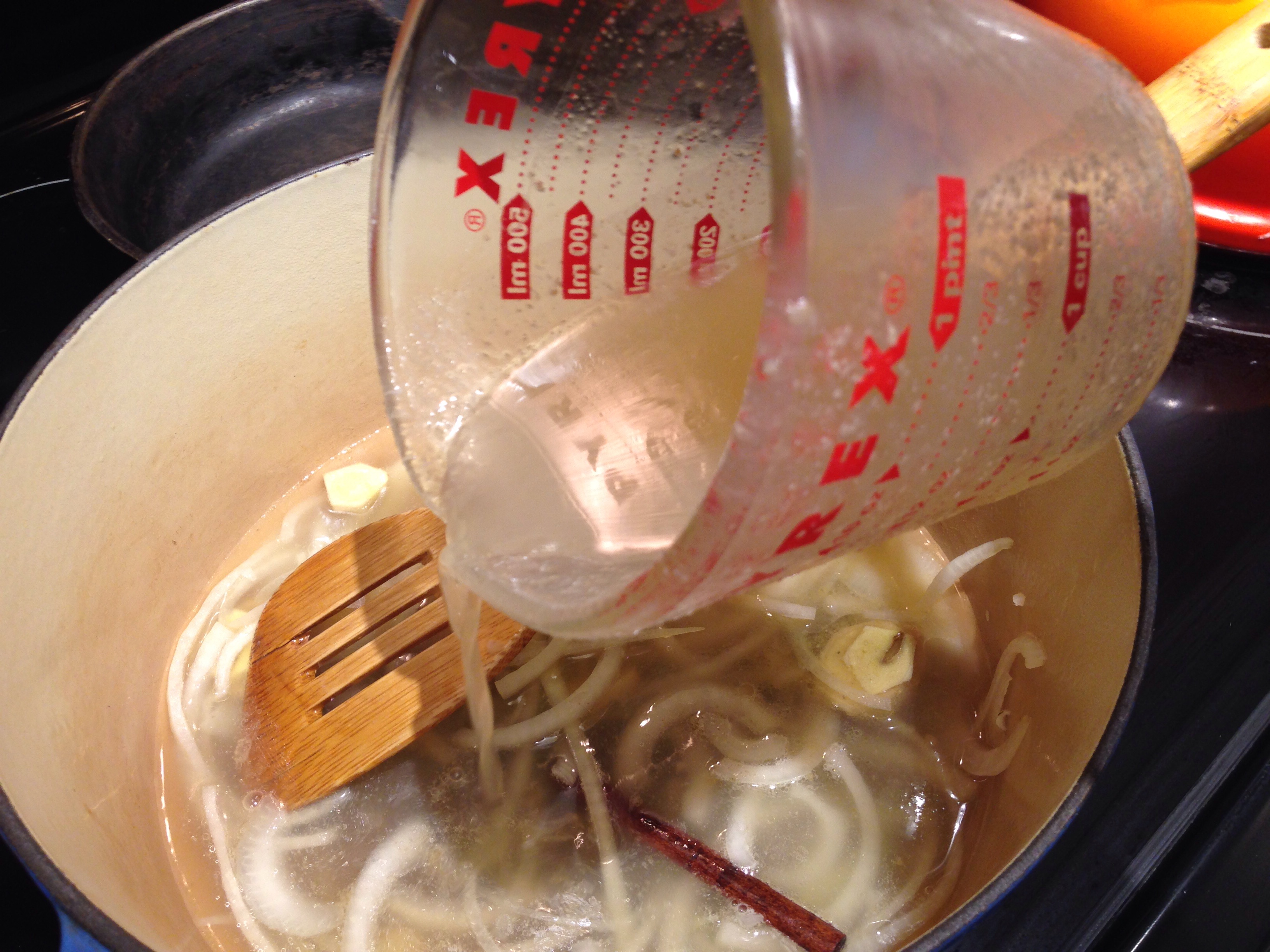 I tossed in the cinnamon stick and the tea strainer full of spices, brought the whole thing to a boil and then let it simmer. While that was working, I put about 10 oz of rice noodles in a bowl filled with really hot tap water. And I prepared some veggies to go in the soup.

You can choose any veggies you like. I went for a green theme. I steamed some broccolini and seared these gorgeous baby bok choi in an extra hot cast iron skillet and sliced them up. 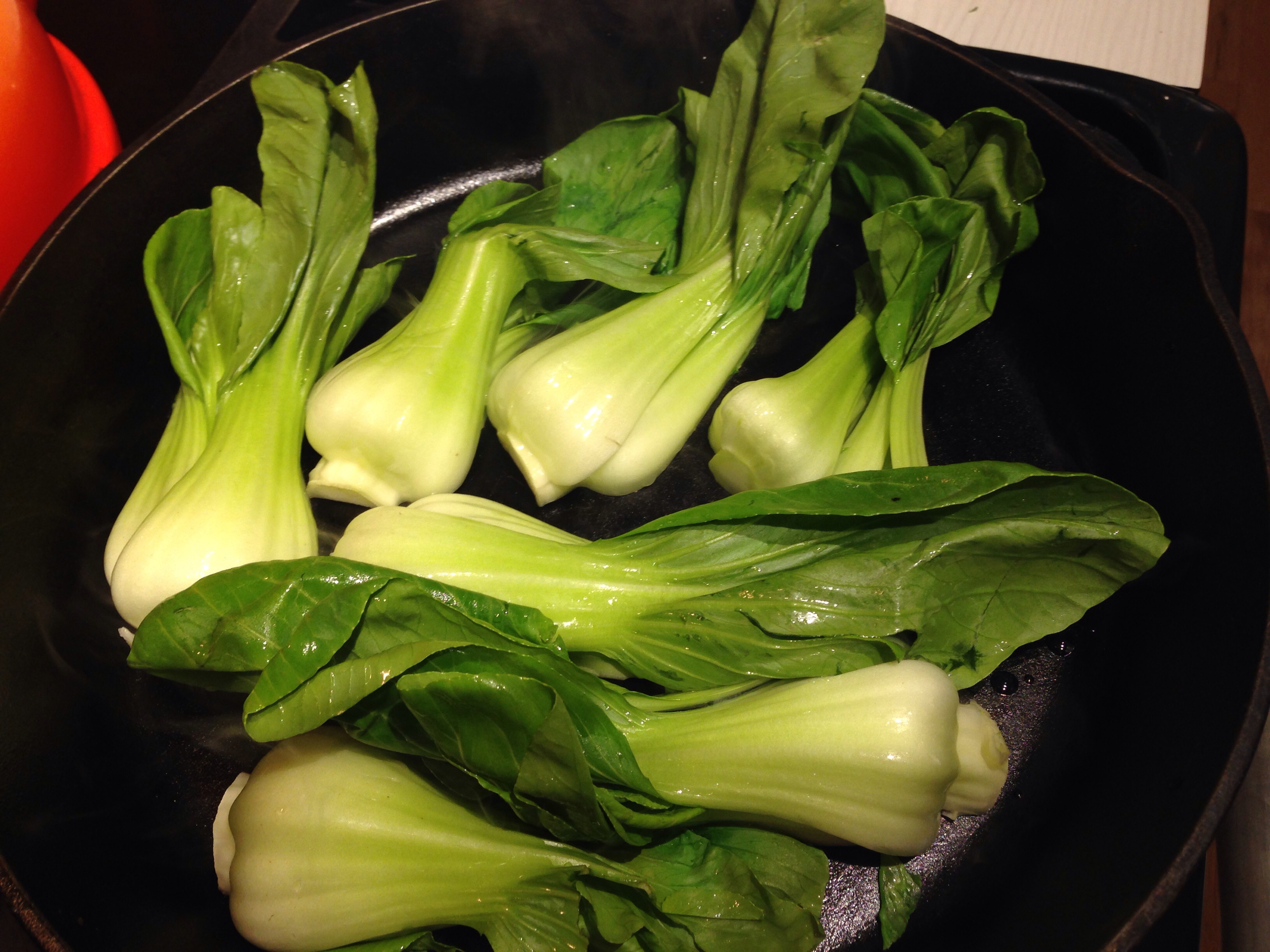 After about a half hour, I tasted the broth. It totally tasted like pho! I assembled the bowls: softened noodles on the bottom, veggies, sliced leftover turkey breast (cold, straight from the fridge, the broth warms it right up), sliced jalapeno. After that, I ladled boiling hot broth over the bowls. Temperature is key with pho. Hot! Then I garnished with fresh basil. You could add cilantro, mint, and bean sprouts as well. I just used what I happened to have. I served it with lime, fish sauce and sriracha. 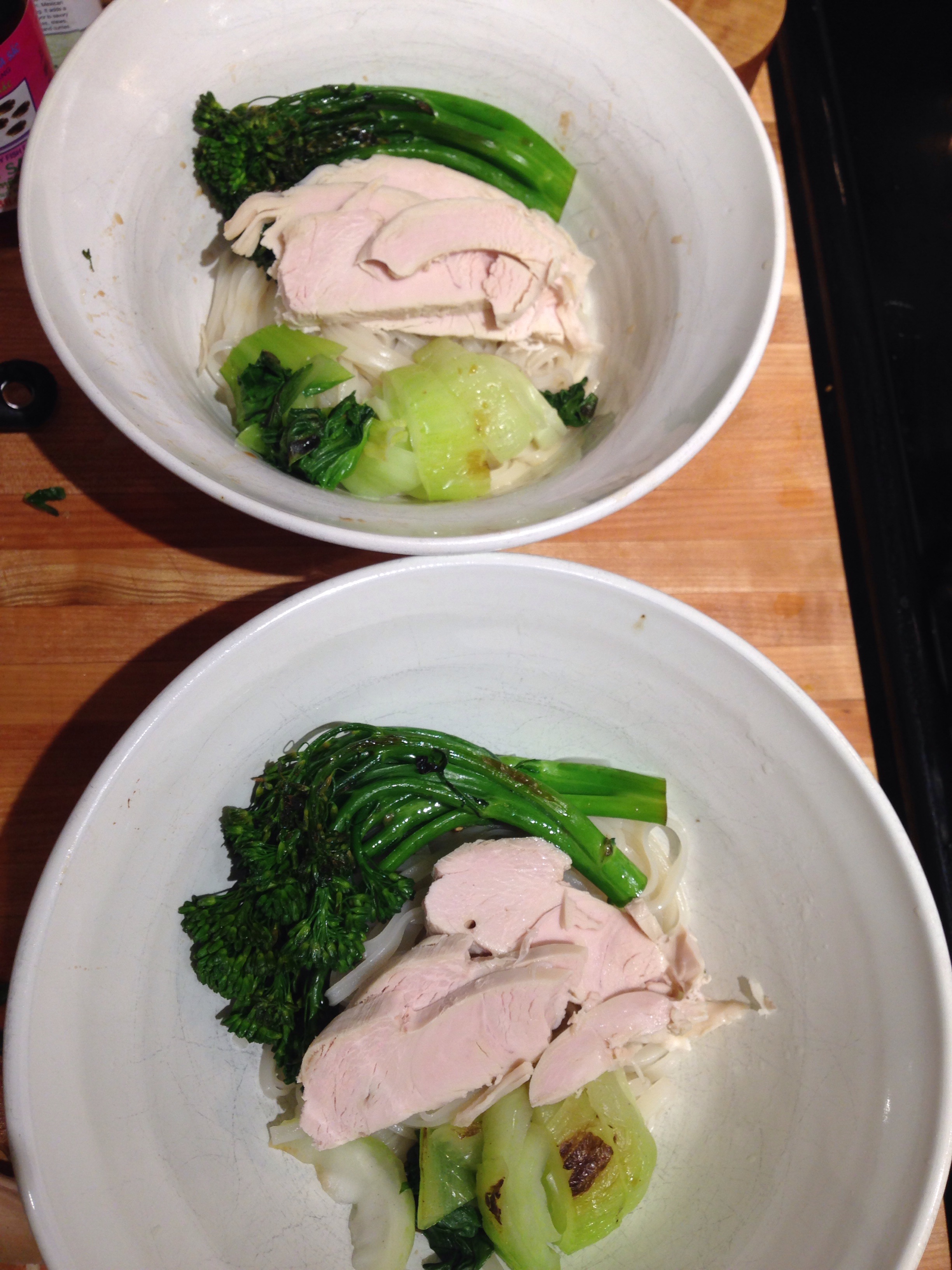 3 to 4 cups vegetables of your choice, cooked.

One bunch fresh basil for garnish. (You could also use cilantro, mint or a mix of the three)

Toast the spices in a large dutch oven and then spoon them into a tea strainer or tie into a cheese cloth pouch and set aside. You can also just leave them in the pan (but you’ll have to avoid eating them later). Fry onion, ginger and cinnamon stick in a drizzle of olive oil until the onion has softened. Pour in the stock. Add the tea ball of spices. Bring to a boil and then simmer for 20 to 30 minutes.

Meanwhile, put the noodles in a big bowl and fill it with super hot tap water. While they are soaking, prepare the vegetables however you’d like. I halved and seared four small heads of baby bok choi in a hot dry skillet and then poured a little water in the pan and let them steam for just a few minutes. I removed them and sliced them. I then wiped out the pan, put a bunch of broccolini in, added a splash of tamari, and poured a little water in and let that steam for a few minutes.

After the broth has been simmering for 20 minutes, taste it and make sure the spices are strong enough. If it needs salt, consider adding some fish sauce, if you like that flavor.

Once you have your vegetables prepared and your broth tastes right, drain the soaking noodles and put them in the hot broth. Wait about 60 seconds, then portion the noodles out into large bowls. (You can skip this step and just portion the noodles out of the hot water, but I like them to get hot and to absorb a little broth. It also helps if they aren’t quite soft enough). Add the vegetables, meat, jalapeño slices to the bowl. Spoon the hot broth over it. (Important: it needs to be super hot!) Garnish with fresh herbs and bean sprouts. Serve with lime, fish sauce and sriracha.