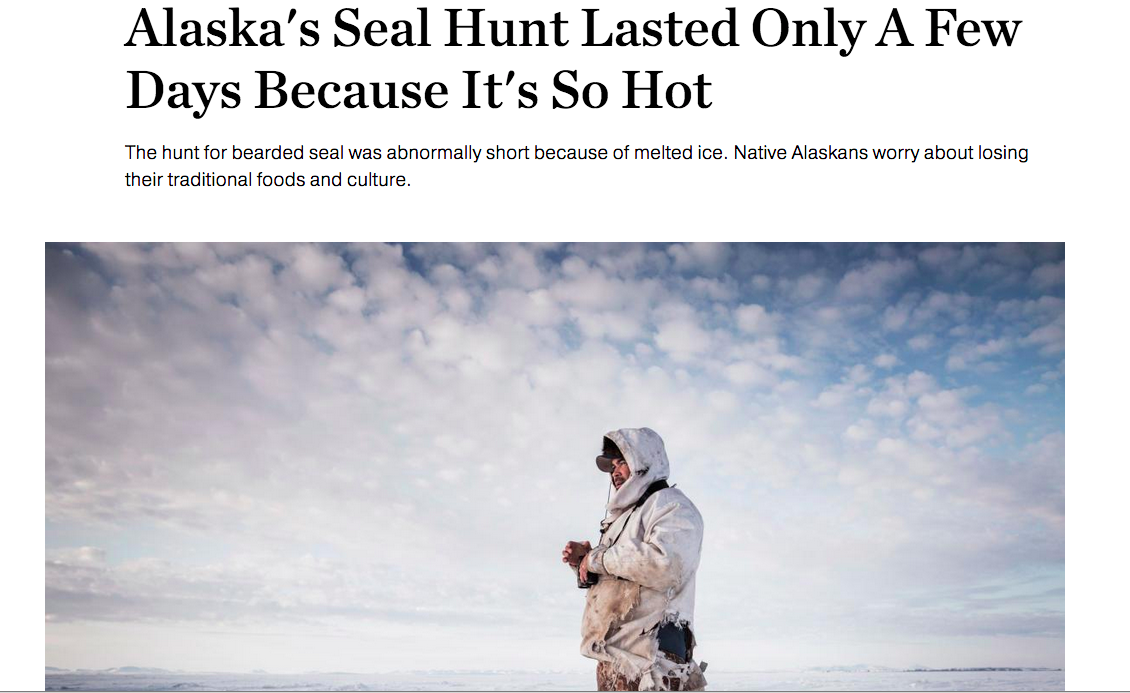 Whew. Kind of a whirlwind the last few weeks turning around a story about hunting bearded seal out of Kotzebue for National Geographic. It’s the first story out of three I’ll be working on with Katie Orlinsky over the next few months that have to do with climate change, subsistence hunting and traditional foods in Alaska (thanks to a travel grant from the Pulitzer Center on Crisis Reporting.)

KOTZEBUE, Alaska—In this Far North village, no animal provides more protein to fill freezers than the bearded seal. A single seal can supply hundreds of pounds of meat, enough to feed a large, extended family for a winter.

For generations, every late June and early July, native hunters like Ross Schaeffer and his niece Karmen Schaeffer Monigold have motored through the broken sea ice of Kotzebue Sound in northwestern Alaska, looking for seals basking on frosty rafts. But this year, temperatures were close to 70 degrees, there was no ice in sight, and the seals had already migrated north.

This seal-hunting season was the shortest in memory, lasting less than a week, compared with the usual three weeks.

Schaeffer and Monigold did manage to get a few animals, but the conditions were nothing like Schaeffer, 68, had seen before. By the third week in June, when Monigold would usually be dressed for cold, she drove out to check on her drying seal hide wearing flip-flops and shorts.

“Every year we’ve gone out, it’s getting harder and harder because the ice is so rotten by the time it’s time to go hunting that the seals are hard to find,” Monigold says.

In Kotzebue, as temperatures and ice become increasingly unpredictable, hunters worry their children and grandchildren will no longer be able to participate in the traditional seal hunt. Kotzebue is among the largest of roughly 40 Alaska Native communities on the coast between Bristol Bay and Kaktovik that rely on bearded seal.

Kotzebue’s changing seal season is part of another chapter of Alaska’s accelerated climate change story, which is threatening the food, economics, and culture of Native communities.