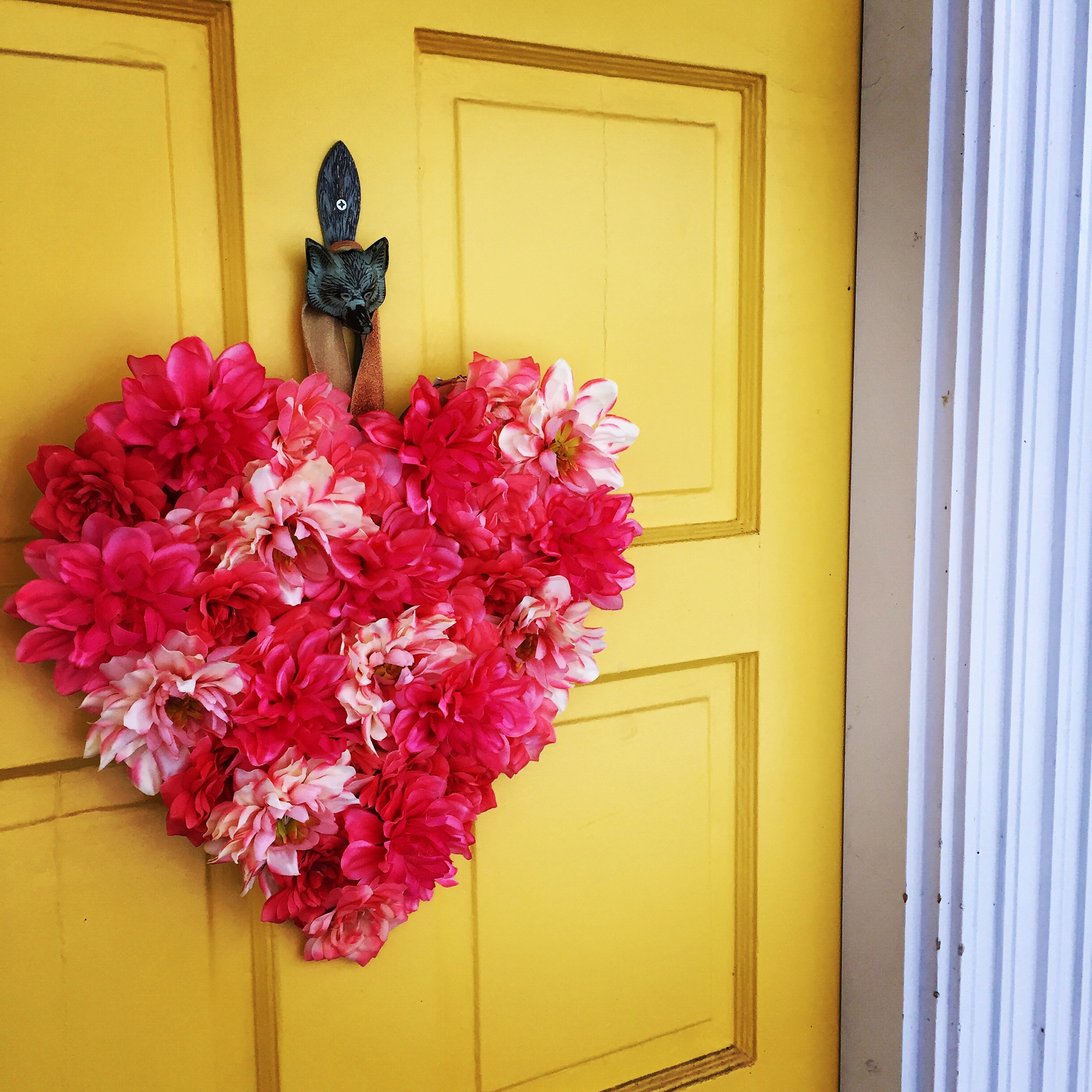 By Julia O’Malley and Natasha Price

I was cruising through Target the other day when I came across this heart-shaped faux flower Valentines Day door decoration: 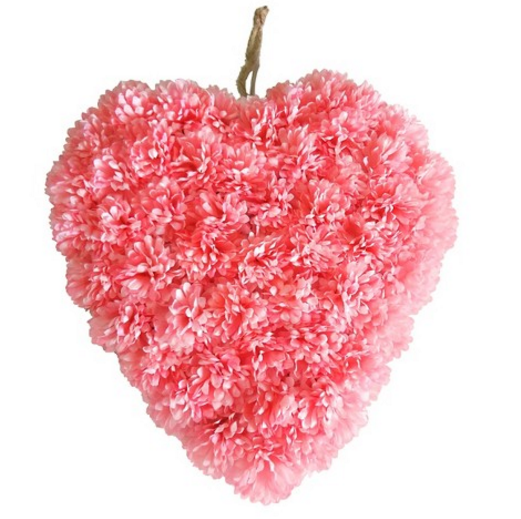 I liked it. I wanted it. A person this time of year in Alaska has to take the festive springy-ness where they can get it. But the price tag, $20, seemed steep. Especially since I have two front doors at my house because it’s a duplex. Forty bones for fake flowers seemed much. So I texted craft whiz Natasha Price of Alaska Knit Nat to see what she thought.

Faux flowers aren’t cheap. But, it turns out you can make one of these for less. In fact, you can make a COOLER one for $10 to $15, give or take.

Here’s how we did it:

First step, I’ll hand this post over to Natasha. She says:

Fake flowers can often be just as pricey as fresh, but with a little coupon clipping, iPhone app knowledge and sale timing you can purchase silk flowers on the cheap.

I first checked Bishop’s Attic thrift shop. They often have silk flowers for a fraction of the cost of new ones but we needed a hefty quantity of blooms.

So it was off to Michael’s, kingdom of fake flowers. I looked for blooms that didn’t stick out much (e.g., rose buds or tulips). The flowers I purchased were originally $4.99-7.99 a bunch, with about seven blooms on each bunch. You’ll need about 40-50 blooms per heart, so we needed roughly 150 blooms.

I purchased the flowers when they were 50 percent off. Michael’s often has sales on flowers so if they are full price, wait till the next weekend to see if they go on sale. I also used the Michael’s app and a mailer coupon where I got 40 percent off one item and 20 percent off all non-sale items. I ended up spending $45 for plenty of flowers for three door hangers.

Natasha chose an array of pinks:

You want to make a template for your heart. We each drew half a heart on a piece of folded newspaper and then unfolded it. We chose the one we liked best, touched it up a little with scissors and used it as a pattern: 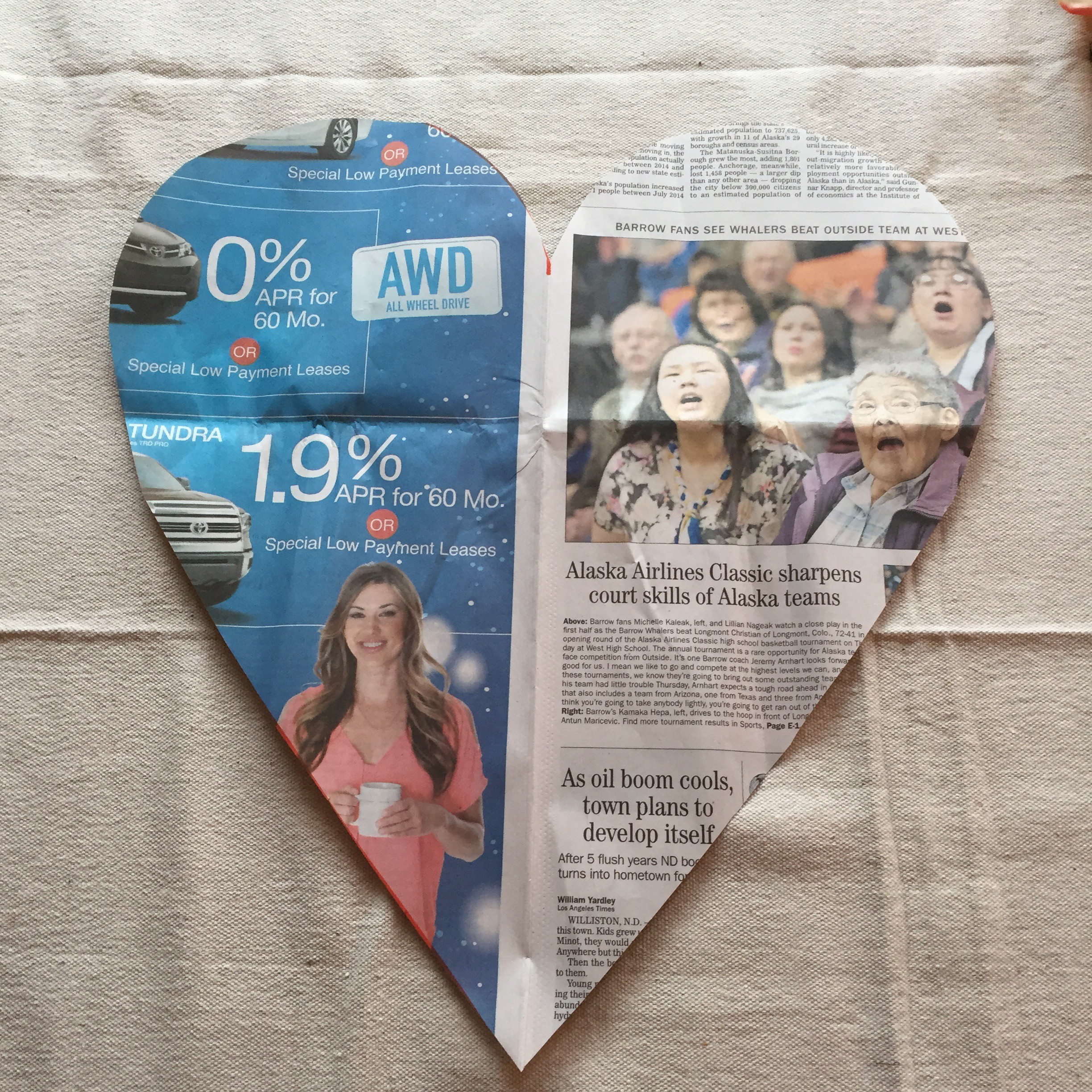 We placed it on a piece of cardboard and drew around it: 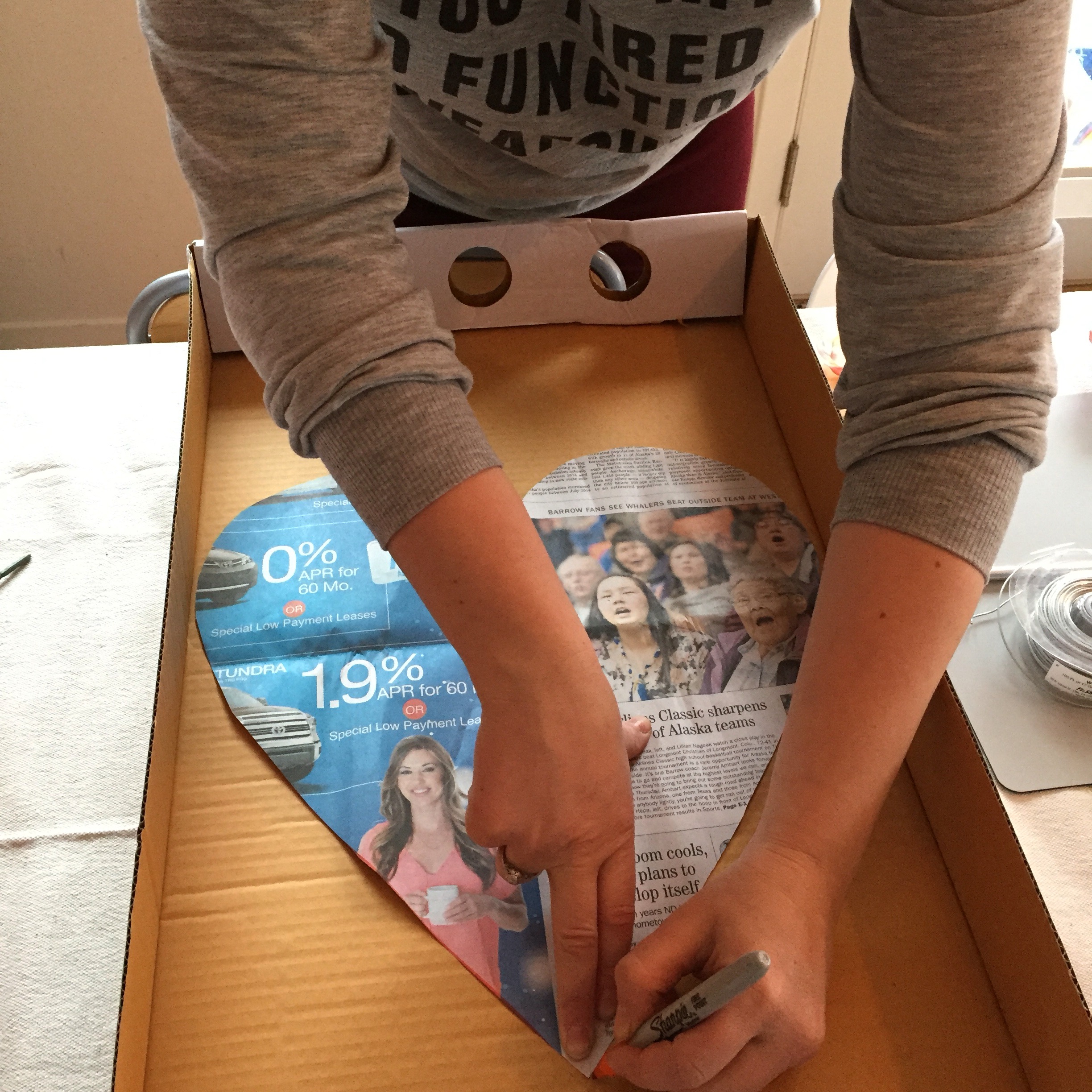 Then we cut along the line (being careful not to accidentally carve into the table):

We made two for my doors and Natasha made a smaller one for her office.

We threaded wire through them and taped it on the front of the heart to make it flat. That way, we’d have a place to tie the ribbon.

Next, Natasha pulled the flowers off their stems and snipped off any part on the backs of the blossoms that would make them hard to glue flat. Then we arranged flowers on the first heart to give a sense of how it would come together. And, then, we started to glue.

We experimented with each heart, changing the ratio of large to small flowers. Here’s the first one: 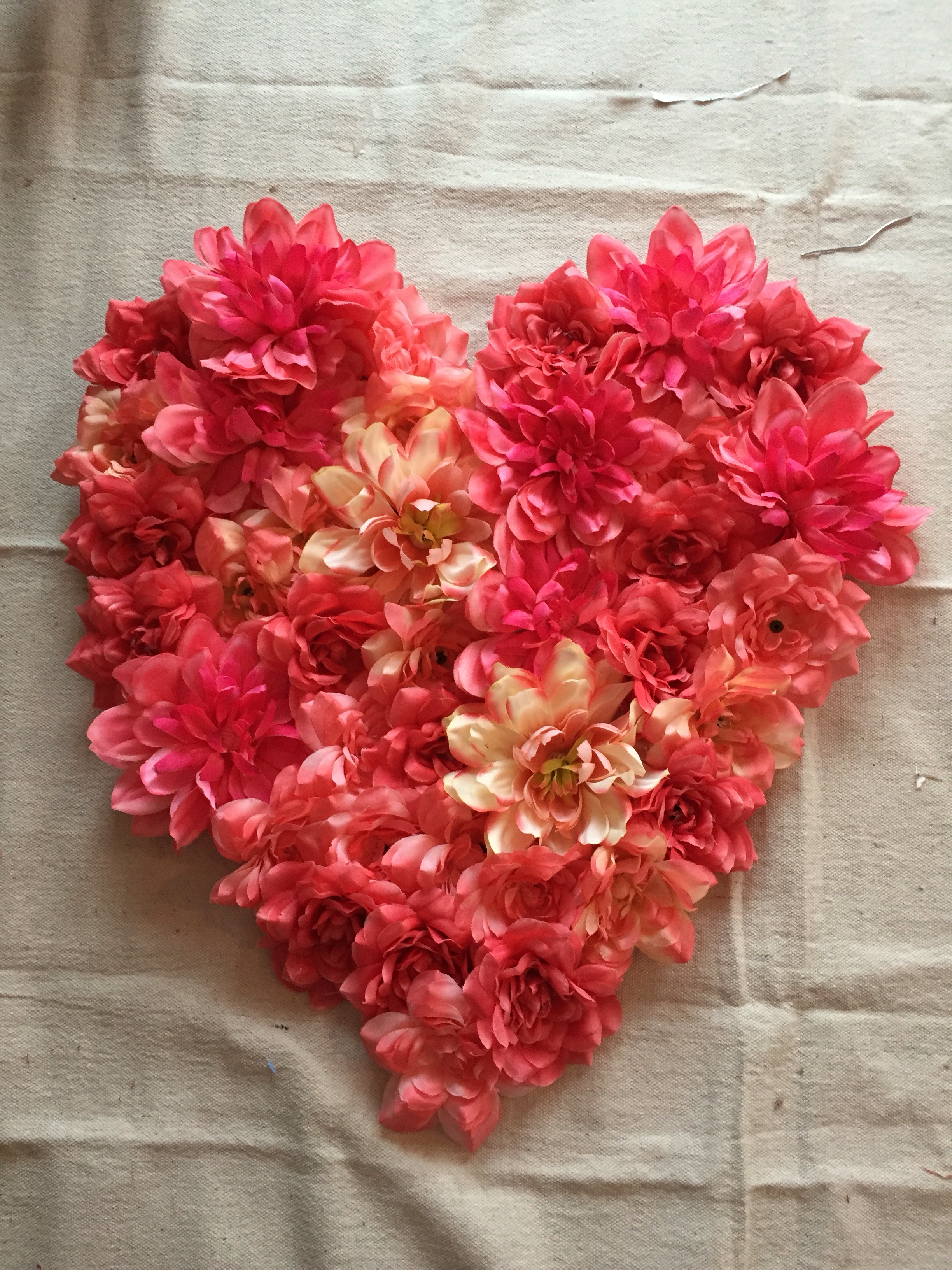 Once we finished putting the flowers on, we chose our ribbon. 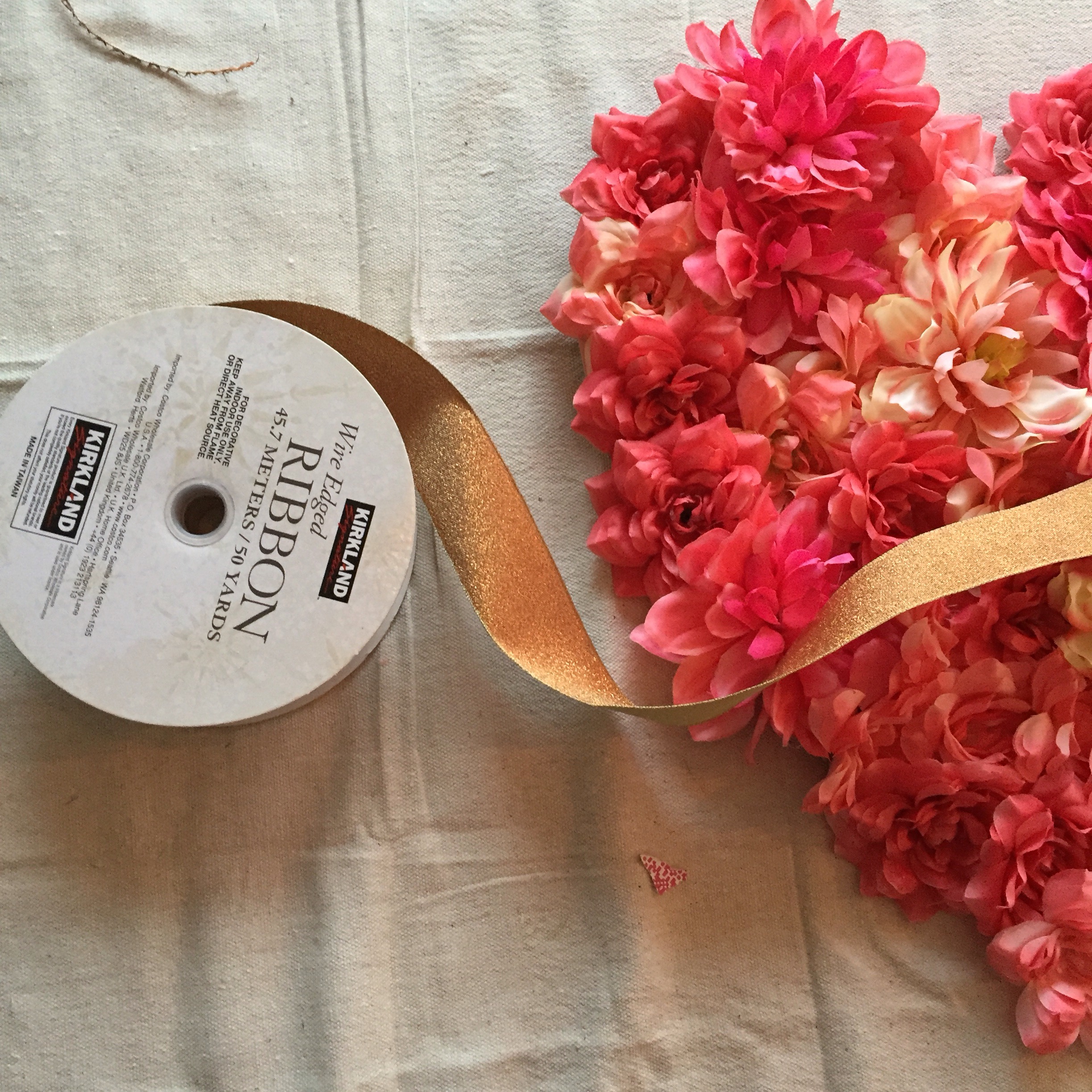 We threaded the ribbon through and looped it around the wire.

Then we secured it with tape.

And there it was (That’s Natasha’s. It’s gorgeous):

And here are my front doors, giving winter (and Target) the flowery finger. 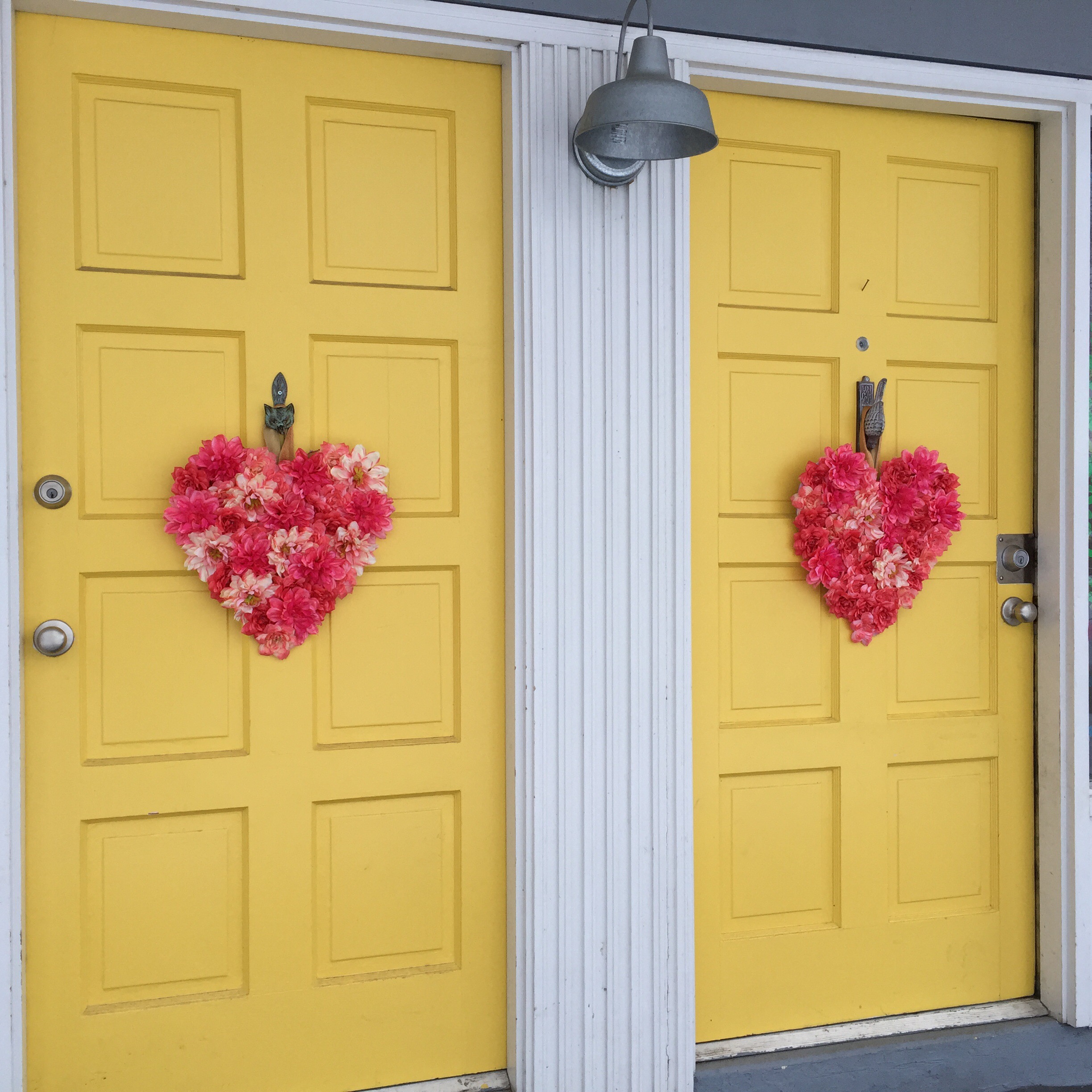