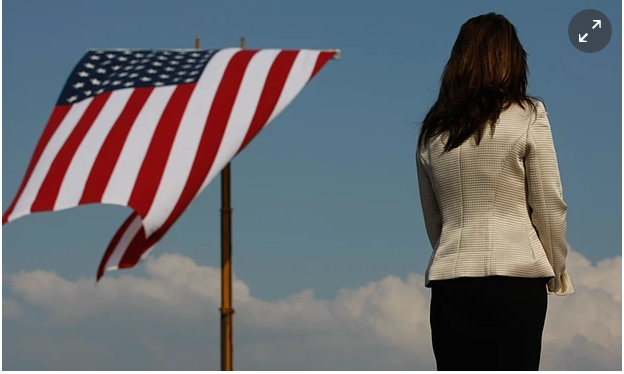 There was a time when Sarah Palin was normal by Alaska standards. Way back before the hoopla, and way before she endorsed Donald Trump, she made sense as a politician here. That’s not the case any more. I’m told she lives in Alaska most of the time, but she’s invisible in public life.

But back in the day, I liked her – and so did many in my community. I’m not conservative, but she grew on me when I worked as a reporter in Anchorage in the mid-2000s, and the reason had nothing to do with politics. She was a kind of regular person I recognized as of this place. Tough, funny, pragmatic. She loved Alaska like I did. If you didn’t know her then, it’s hard to explain or believe.

One day, during her time as governor, my editor pointed out a picture of her in our newspaper one day. The photograph had been taken in Barrow, the nation’s northernmost city. Palin was wearing a kuspuk (an Alaska-Native-style jacket), holding her newborn, talking to a woman in a grocery store about the high price of food. The image had exactly the this-is-Alaska-life realness that resonates deeply here, where voters prize authenticity most of all.

If the grocery store photo-op was planned, my boss said, she was brilliant. If it wasn’t, she was a natural.

I don’t think it was planned – she wasn’t calculating like that, and most Alaska politicians aren’t that sophisticated. At the time, Palin’s politics could only be described as moderate. Democrats liked her. She had no problem with taxing oil companies or handing out money to help people with fuel costs. She believed in climate change. As for the word-salad syntax problem everybody makes fun of? Up north, nobody cared. Maybe it even added to her regular-person cred (our long-serving representative Don Young suffers from the same affliction.)

Above all, Palin was nice. If a reporter called her office, she called back on their cell phone: “Hi, this is Sarah.” Like most people here, she was religious, but didn’t talk about it publicly. Like most people, her family hunted and owned guns, but she didn’t talk too much about that either. She was fuzzy on policy details, but only insiders noticed. She made a big deal about government corruption.

“She wanted to be liked and, as a result, was likable,” said a reporter friend of mine who covered her as governor. “Her only real enemies were white-guy boys club oil politicians who were getting indicted by the feds.”