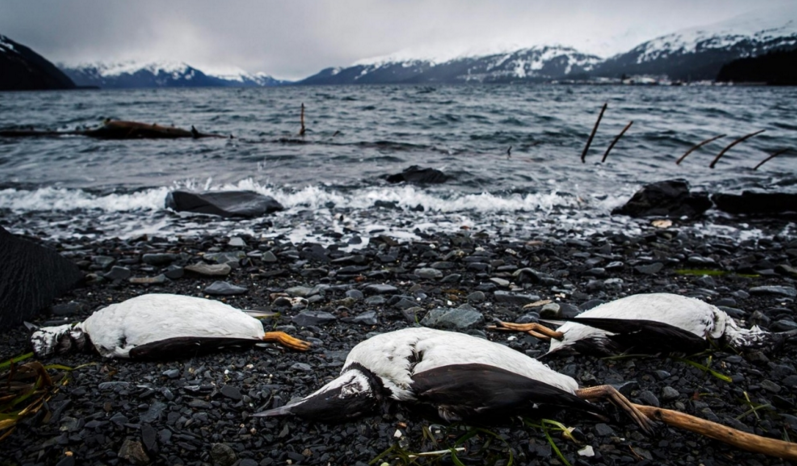 WHITTIER, Alaska — David Irons, a biologist who specializes in Alaska seabirds, was checking on a friend’s boat in Whittier, a coastal community south of Anchorage, on New Year’s Day when he spotted a line of white dots along the beach. He walked down to investigate.

“There were just dead murres everywhere. It was incredible,” he said. “I estimated 8,000 birds in a little bit more than a mile.”

Common murres are sharp-billed black-and-white seabirds that feed on small fish. In the weeks after Irons’ discovery, scientists and volunteers found thousands of dead and dying murres on Alaska beaches, the largest murre die-off on record. Sick murres also began to turn up in Alaska’s interior, hundreds of miles from the ocean.

The massive seabird die-off is part of a larger story about the health of Alaska’s oceans as sea temperatures rise. For more than a year, scientists have been cataloging smaller, unexplained episodes of animals dying on beaches — including other birds, sea otters, sea lions, several species of whales, starfish and fish. In all cases, the suspected cause of death has been linked to warmer sea temperatures, and some scientists suspect there is also a connection to the toxic algae that thrive when temperatures tick up even a few degrees.

“We are having water that is 5 degrees [Fahrenheit] warmer over a huge area. At the same time, we are having these unusual mortality events,” said Heather Renner, a supervisory wildlife biologist at the Alaska Maritime National Wildlife Refuge, which encompasses 2,500 coastal Alaska islands. “We don’t have any proof they are linked, but they are happening at a time when the ocean is warmer than it’s been for ages.”

One thought on “Is toxic algae killing animals across Alaska? (For Al Jazeera America)”