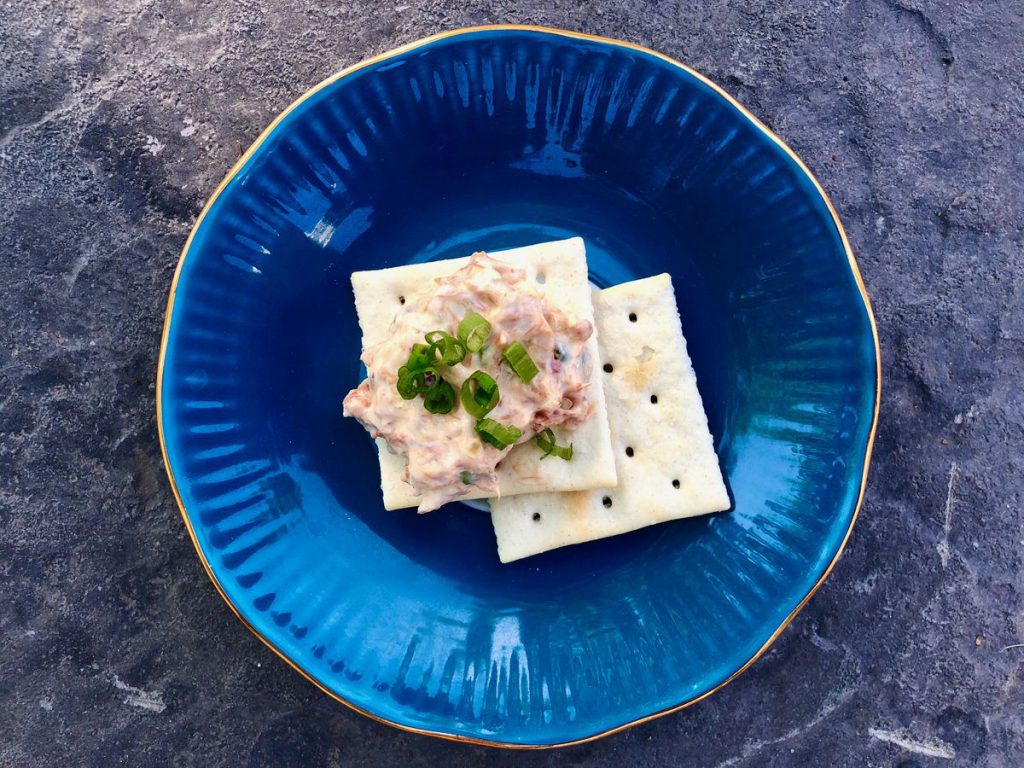 When I started looking into writing about smoked salmon spread, I got all nostalgic about my aunt Alicia’s recipe. I could picture it, set out before family dinner on a Sunday, in the ceramic bowl on a plate stacked with Wheat Thins. My uncle Bob dipnetted the Copper River and was our family’s main salmon supplier. Alicia was an expert with the backyard Little Chief and used to teach classes. Of course I immediately texted my cousin to ask for the recipe.

And that’s when I remembered Rule No. 1 about Alaska cooking: We are always adapting to what we have on hand. What do we have at the cabin? What’s in the freezer? What could we get at the store? Do we have leftover grilled salmon? Did the smoked fish come out a little salty? I read maybe 50 versions of salmon spread recipes, some dating back to before World War II, and made five of them.

What I settled on was a basic recipe for spread and a crowd-sourced, choose-your-own-adventure list of things to add, in keeping with how most people seem to make salmon spread.

A good base spread in my opinion has a nice mix of fat, brine, acid and onion (heat optional … I’m a big fan of Frank’s RedHot in the base). I know that some people use leftover grilled salmon and liquid smoke. I didn’t test that because I just don’t like liquid smoke.

So much depends on the flavor of the fish. A particular thing to pay attention to is the sweetness. I find the sweeter smoked fish works really well when you want to make your spread on the hotter side.

I settled on whipped cream cheese for the base because it spreads well on crackers, though a person could use a mix of traditional cream cheese and sour cream for the same effect. That said, if you want to add in Asian flavors like Sriracha or wasabi, I think that there’s just something that tastes better about subbing in mayo for half the cream cheese. The consistency is a little more dip-like and works great in the center of a sushi roll. If you really want to go there, you might try Kewpie-brand mayonnaise, available at most Asian markets, which contains MSG but also really packs the umami.

This might be controversial, but I like green onions best and prefer them to grated onion, onion powder or seasoned salt (but, if you’re camping, that onion salt sure packs well.).

My new favorite party salmon spread recipe, adapted from the go-to recipe given to me by Steve Kruschwitz, who handles the technical parts of the ADN food newsletter, is this base spread with roughly eight finely chopped canned jalapeño coins, two tablespoons jalapeno brine and half a super finely chopped fresh jalapeño. Just don’t forget to tell the kids it has a kick.

1 cup, roughly 7 ounces, smoked salmon. (You can also use a mix of smoked and leftover grilled fish.)

Juice and zest of half a lemon

Salt and pepper to taste

Mix until combined. If you like it really smooth, whiz it in a food processor.

Up to a tablespoon prepared horseradish

A big shake of seasoned salt

8 to 10 pickled jalapeños (plus a splash of brine)

2 tablespoons capers (plus a splash brine)