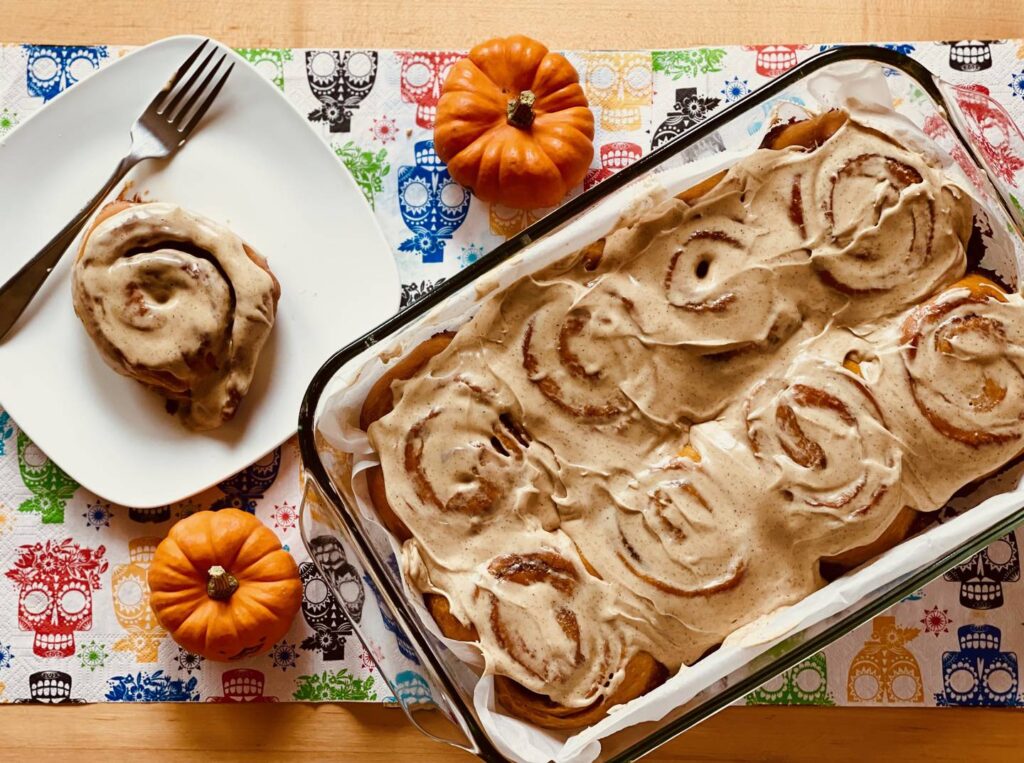 I’m trying to think about whether I’ve ever gone to visit a village in Alaska and not had cinnamon rolls in somebody’s auntie’s kitchen. I’m pretty sure the answer is no. Alaskans are roll people. My mom makes them at Christmas every year. There’s between one and six recipes for rolls in just about every Alaska church cookbook in my — somewhat embarrassingly large — collection.

Every now and then I like to conquer a multi-step baking project. There was the sourdough bread trip last April, and before that, the Bakeshop-inspired starbread. Now, amid pumpkin season, I would like to present my tastiest project recipe yet: pumpkin brioche cinnamon rolls. I’m really hoping some aunties will try them and give me a review.

The steps are pretty standard for roll-baking people. The ingredients are not fancy — just canned pumpkin, some extra butter and a little instant coffee. Adapted from a recipe by New Zealand-born cinnamon roll master and blogger Erin Clarkson, these babies feature a soft pumpkin brioche dough, pumpkin-y cinnamon filling and a maple frosting you tart up with some coffee powder. (She calls them “buns,” because New Zealand.) It’s a PSL situation you don’t have to be ashamed of.

The big key to this recipe is a standing mixer with a dough hook. You can also knead by hand, but a mixer makes everything much, much easier. Another tip: Take that butter and cream cheese out and let it warm up before you work with it!

In the bowl of a standing mixer fitted with a dough hook, combine yeast, warm milk and sugar and give it a swish with a wooden spoon. Allow to stand for a few minutes until you can tell the yeast is active because it bubbles. (If it doesn’t bubble, start over with fresher yeast.)

In a separate bowl, whisk together flour, salt and spices. With the mixer on the lowest speed, add eggs, pumpkin, and vanilla to the yeast combination. Mix until combined. Gently shake in the dry ingredients, roughly a quarter at a time. Once the dough is starting to coalesce, increase the mixer to medium speed and allow it to run for a few minutes until the dough is smooth. Now, with the mixer still running, add butter, a slice at a time. Allow the mixer to run until the butter is all incorporated and the dough is smooth and elastic. This will take a few minutes and look weird at first. Trust the process.

Scrape the dough out of the bowl. Scrape any leftover dough bits out of the bowl and spray it well with cooking spray. Put the dough back in the bowl, cover with a damp cloth and put in a warm place to rise, roughly an hour, until it doubles in size.

Make the rolls. Dump the dough onto a lightly floured surface and shape it into a rectangle with your hands, long side up. Roll it out into a larger rectangle, long sides at the top and bottom, that’s about 24 inches by 16 inches. Spread the rectangle with filling all the way to the edges. Roll the dough tightly, staring at the long top side, into a long tube. Cut the tube in half with a very sharp knife. Move both rolls to a plate, cover and freeze for 20 minutes.

Grease a 13-inch by 9-inch baking pan and, if you’d like, line with parchment. Remove the dough rolls from the freezer. With a very sharp knife, slice each roll into six equal parts and arrange in the pan. Now you may cover and refrigerate overnight (Bring them to room temperature before baking). Or, preheat your oven to 350 degrees and let them rise for 45 minutes to an hour. Bake the rolls for 35 to 40 minutes. They should be golden on the top.

Make the frosting. In the bowl of a standing mixer fitted with the paddle attachment, beat the butter and cream cheese until fluffy, add the sugar, syrup, vanilla and coffee powder. Mix until well combined. Spread on the warm rolls and serve immediately.