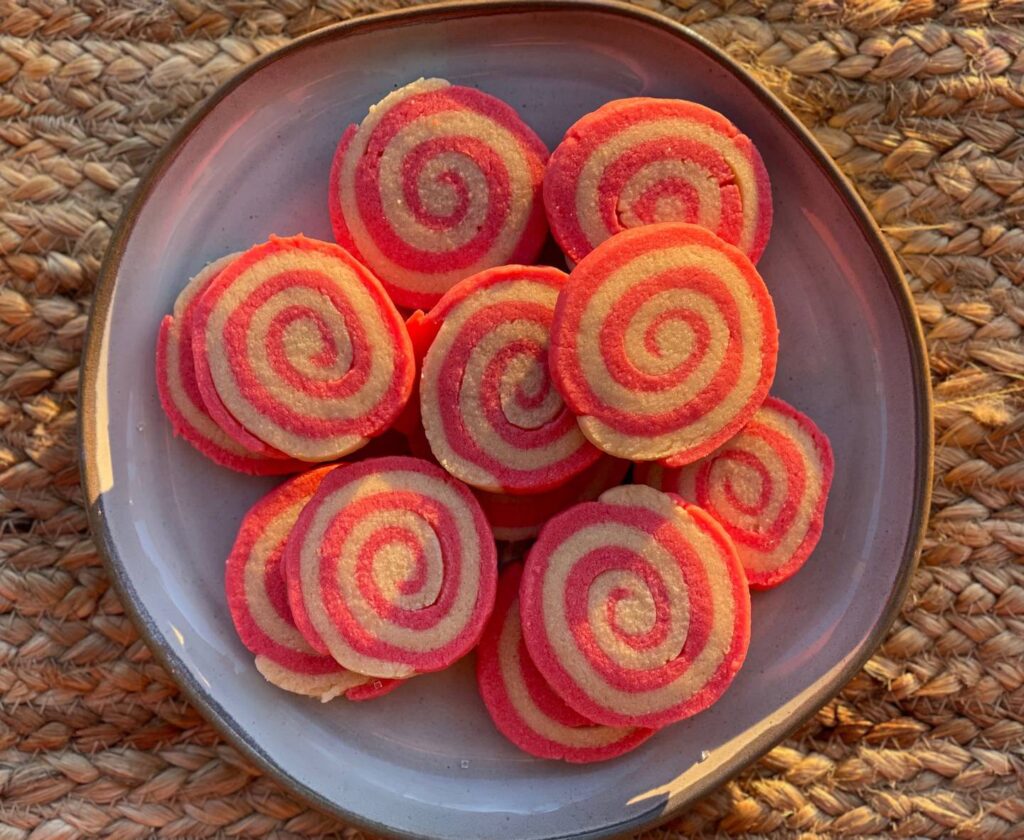 The idea for this Christmas pinwheel cookie came to me in a dream in which I was invited to a cookie exchange and had forgotten to bake any cookies but was meaning to bake these.

There are a thousand iterations of the holiday pinwheel. I prefer the two-color variety. I love the look of them, like they could maybe hypnotize Batman.

This is a very serviceable vanilla sugar cookie. You could add peppermint, almond or raspberry extract to the red layer and customize it. You could also roll the outside of the cookie in sprinkles before baking. If you want a darker red, you can use gel food coloring, which tends to make more vibrant colors. And, there’s really nothing saying you can’t make the white layer green.

The most challenging thing about this recipe is the shaping and rolling of the dough, sort of cinnamon-roll style. If the dough is too cold, it will crack. If it’s too warm, it will get greasy. So you want to start with chilled but not rigid dough and work quickly to make a tight roll. If you start rolling and it’s cracking, give it a few minutes and it will get pliable.

Method: In the bowl of a standing mixer fitted with a paddle attachment, cream the butter and the sugar with the vanilla, baking powder and salt until fluffy. Add the egg and beat on medium speed until well combined. With the mixer on medium-low, shake in flour, a cup at a time. Mix on medium speed until it forms a smooth dough. Remove the dough from the bowl of the mixer, form into a ball and cut in half with a sharp knife. Shape one half of the dough into a rectangle about the size of a sandwich. Slip into a sandwich bag and refrigerate. Return the other half of the dough to the bowl of the mixer, add in the food coloring. (If you’d like you could add another flavoring at this point like a half teaspoon of peppermint extract).

Beat the dough in the mixer until the color is well mixed in. Remove from the bowl, form into a rectangle and slip into a sandwich bag and chill it. Once the uncolored dough has been chilling for at least 30 minutes, roll it out on a sheet of lightly floured parchment, working to keep it a rectangle shape, about 9 by 14 inches. Set it aside in a cool place. Remove the second dough from the fridge. Working quickly, roll it out on parchment, attempting to make it roughly the same size and shape as the first rectangle. Invert one of the sheets of dough on top of the other, matching the sides and ends of the dough rectangles as best you can. Peel away the parchment on top of the top layer.

Trim the edges of your two-tone dough stack to make as perfect a rectangle as you can. With the long side of the rectangle at the top, begin to roll it tightly toward you like you’re rolling cinnamon roll dough. Move slowly, rolling just a bit at a time, pressing the layers together as you go. Repair the dough with your fingers if it cracks. You should end up with a roughly 14-inch dough log. Wrap in parchment and refrigerate for at least 30 minutes. Before baking, preheat the oven to 350 degrees. Remove the log from the parchment, gently roll it on the counter to return it to shape if the bottom has gotten flat. With a sharp knife, slice it in roughly ¼ inch slices and arrange swirl cookies on a parchment-lined baking sheet. Bake for 11 minutes, until the cookies are just slightly golden on the edges.