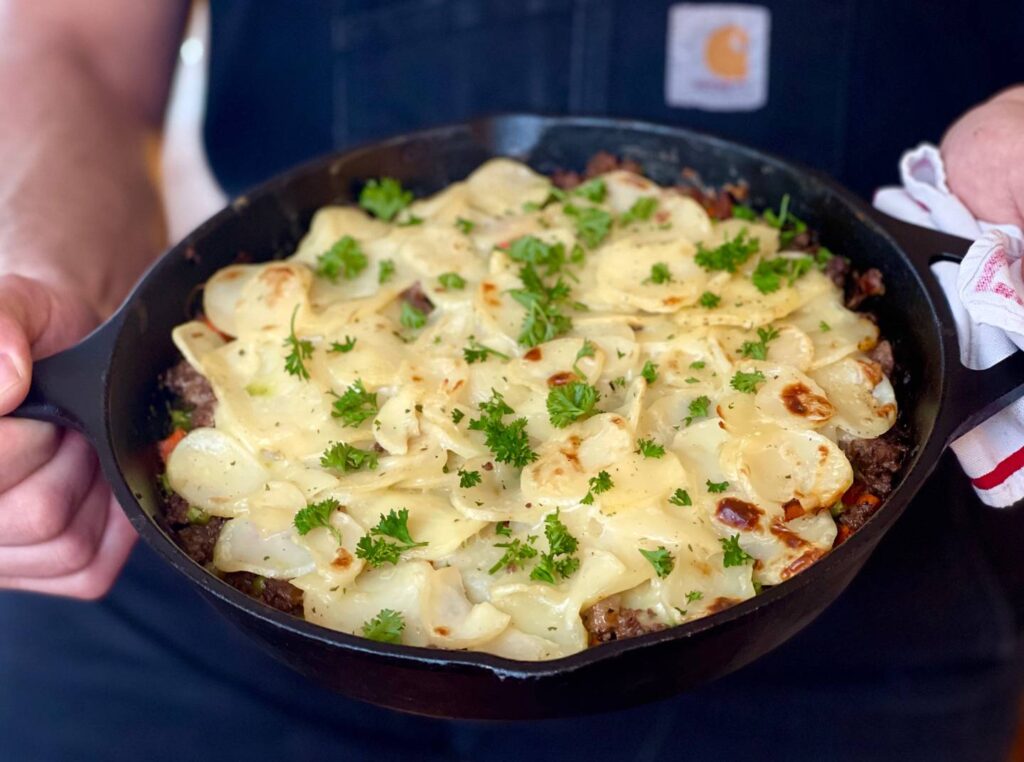 It’s been kind of weird at the grocery store lately. Supply chain troubles caused by weather and the latest wave of the virus have cleared out meat sections and made shelves sparse statewide. Alaskans are ready for this kind of thing. It’s just our culture to put a little bit aside in the pantry and the freezer. This recipe leans into those frozen and shelf stable supplies.

Alaska’s historic cookbooks are a lesson in making delicious things out of what is stored, and this moose pie finds its inspiration there. It isn’t, maybe, going to find itself on the cover of “Food & Wine,” but it’s hard to resist on a dark night in January.

This is an inexpensive, relatively quick version of shepherds’ pie that uses the pantry staple of boxed scalloped potatoes on the top. You could also make your own topping out of fresh potatoes, but it takes longer and, at least for me, those dried potatoes have a nostalgic, salty deliciousness. If you can’t get cream, use more broth or vice versa. My Aunt Ruth, who tested this recipe for me, suggested adding jalapeños to the filling and goat cheese to the potatoes. Other family members have suggested another box of potatoes. Feel free to play around.

If you don’t have access to moose, this recipe can be made with other ground game, beef or lamb. For the non-game meats, I’d recommend browning them separately so you can control how much fat is in the pie. If you use a meat substitute, taste it before adding salt. This recipe also makes a lot, enough for 6 to 8 people, so cut it in half for a smaller feed. A half recipe fits perfect in a standard size cast iron skillet. (The brown bits around the edges are the best!)

½ cup half and half

Preheat the oven to 425. Pour olive oil on the bottom of a large cast iron skillet or heavy-bottomed Dutch oven and place the pan over medium heat. Add onion, garlic, carrots, thyme and bay leaf, saute until the onions soften. Add ground meat, saute until it’s cooked through, about 5 minutes. (At this point, if you can multitask, you can start your boxed potatoes in a pan on another burner.) Add salt, pepper, tomato paste and Worcestershire. Stir to combine with the meat. In a small bowl, beat the cornstarch with broth until it makes a slurry. Pour the mixture in with the meat, stir, allow the liquid to heat until it’s bubbling, then remove from heat. Remove the bay leaf. Stir in half and half, corn and peas. Leave the mixture in the dutch oven or skillet, or, spoon it into a buttered 13 by 9 inch lasagna pan. Cover with a layer of scalloped potatoes. Bake for 25 minutes, and then broil the top for 2-3 minutes to brown the top a bit.