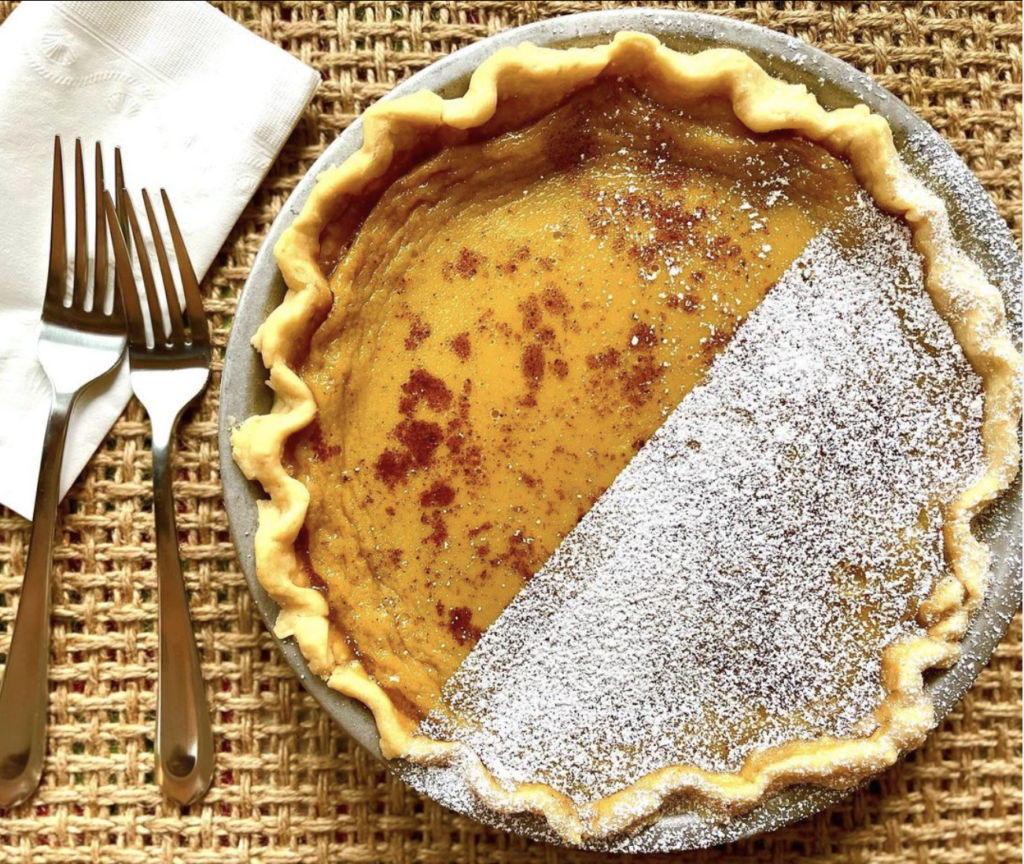 Hey, grown-ups, I want to give you permission to do something a little taboo when everybody is asleep before a holiday and you’ve just baked a pie for the next day. I want you to go ahead and have a slice.

This is a secret, grown-up, pre-holiday holiday we like to call Pie First. My Uncle Tommy invented it. We should all thank him.

So you eat that pie slice, standing in the darkened kitchen, listening to the music of the running dishwasher, under the light on the stove. Maybe have half a glass of wine, too. Just take a minute for your damn self. And, don’t say anything unless someone asks. (They never ask!)

My favorite Pie First pie lately, one I’ve eaten many times on a dark holiday eve, is a nog custard pie. Growing up, my family had a long tradition of raucous holiday parties with serious noggage. My grandparents started it and my parents kept it up—using a recipe that involved cream, whipped egg whites, Captain Morgan Spiced Rum, and lots of nutmeg. This pie captures all of its flavors with less of a hangover.

For years, I used Melissa Clark’s maple custard pie recipe, but that morphed into a slightly lighter pie with a boozy twist. I also sometimes sub birch syrup for maple or go half and half. Maple tends to have a little stronger flavor. Last year I spent Thanksgiving with friends in Connecticut and we bought custard pie from Blackberry River Bistro in Canaan. They used honey in theirs and did a cool half powdered sugar design on the top that I loved and copied in this recipe.

Method: Preheat the oven to 300° F. In a small saucepan, combine syrup or syrups and half of the alcohol over medium heat, bring to a boil, and simmer for 3 minutes or so to reduce and cook off the alcohol. Remove from heat and allow to cool for at least 10 minutes.

In another bowl, gently whisk together cream, eggs, and yolks, vanilla bean, nutmeg, the rest of the alcohol, and salt. Slowly pour the syrup mixture into the egg mixture while whisking. Easy whisking here—don’t whisk so vigorously that the mixture bubbles.

When the mixture is combined, pour it through a fine mesh sieve into the pie crust. Generously sprinkle with ground nutmeg. Bake it for 55 minutes or until the center is jiggly but set. Allow to cool. If you want, cover half the pie with a paper towel and shake some powdered sugar through a sieve on the other half. Serve with whipped cream and a sprinkle of nutmeg.

This recipe originally appeared in Edible Alaska Issue No. 26, Winter 2022.