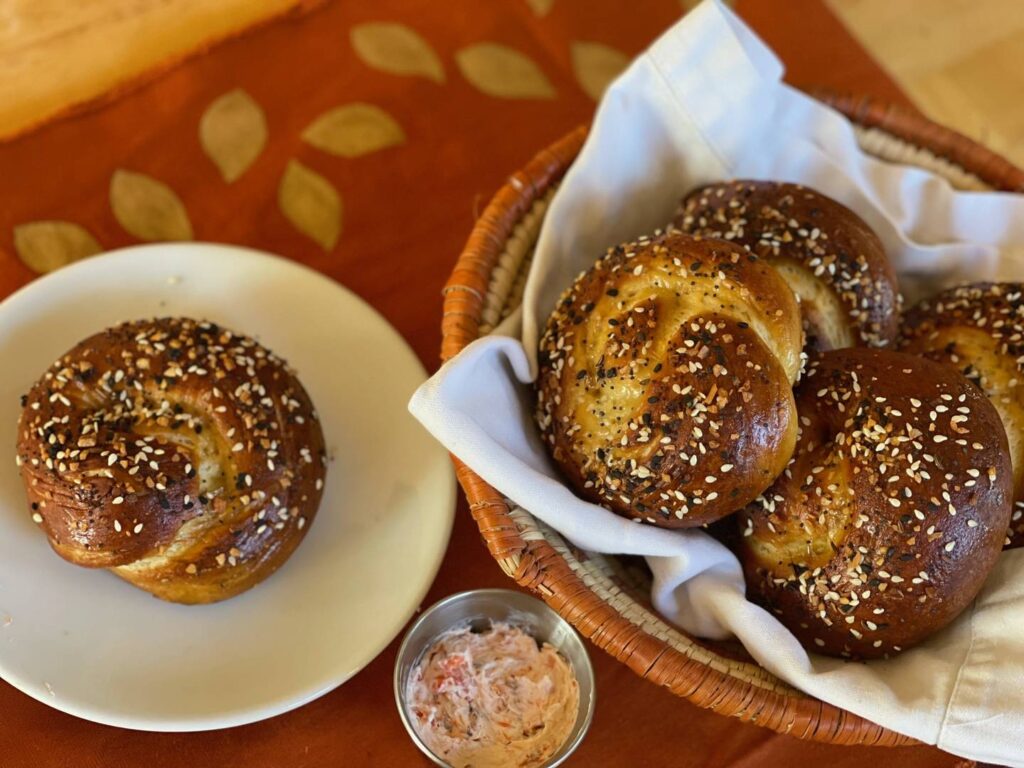 Maybe you’re in the mood for a bagel today but, no offense to the Costco double-pack or the Carr’s bread section, you just don’t want the usual Anchorage bagel. (My friend calls this town a “bagel desert.”) Might I suggest a soft, bagel-adjacent everything-spice pretzel knot?

These delicious buns are sort of like the offspring of a soft pretzel and bagel. Before you get intimidated by the idea of making dough, trust me that these knots aren’t hard, especially if you have access to a standing mixer. They only rise for an hour. A quick dip in a bath of boiling baking soda water gives them a brown pretzel-y crust and flavor. They’re soft and savory and all kinds of perfect for watching the game or bringing to brunch. Smoked-salmon cream cheese kicks them up another very Alaska notch.

Everything bagel spice is available in the spice section of most grocery stores in Anchorage and at Costco. If you’re in a hurry, you can buy store-bought salmon spread or other cream cheese spread. Jalapeno is a favorite at my house. The knots are great split and toasted the next day.

In the bowl of a standing mixer fitted with a dough hook, mix together water, syrup, yeast, salt and melted butter on the lowest setting. Turning the mixer up a click or two, shake in the flour, a cup at a time, until it’s well combined and begins to coalesce into a smooth dough. Turn the mixer off and dump the dough onto the counter. Knead a few times until the dough comes together. It should be elastic and not very sticky. Form it into a ball. Scrape out the bowl of the mixer, spray the bowl with nonstick cooking spray, and put the dough ball back in. Cover the bowl with a damp cloth and let it rise for an hour.

When the dough is done rising, preheat the oven to 425, line a baking sheet with parchment, and fill a wide-mouthed soup pot or Dutch oven with 2 1/2 quarts of water. Stir the baking soda into the water and put it on the heat to boil. Dump the dough out onto the counter, shape it into a long rectangle. Cut the rectangle in half longways and then cut each half into six equal pieces.

Form the pretzel knots. Roll each portion of dough into a log about 1 inch in diameter and about 6 inches long. Arrange the log in a U-shape. Take the end of the left arm of the U, cross it over the right arm and then tuck it under the right arm, to form a twist. Fold the twist downward toward the bottom of the U. Then turn the whole thing over. (See photos) If you have time, you can let the formed knots rise for an additional 20 minutes. Once all of the pretzels are formed, plop them gently in the boiling baking soda bath, three at a time. Turn them over after 20 seconds, boil 20 seconds more. Fish them out with a slotted spoon and set them on the baking sheet. Brush each one with beaten egg and sprinkle it with everything bagel spice. Slide the knots into the oven and bake for 18 minutes.

While they are baking, make the schmear. Mix salmon, cream cheese, caper brine and hot sauce, if desired, in a small bowl until well combined.

Serve the knots warm with schmear.