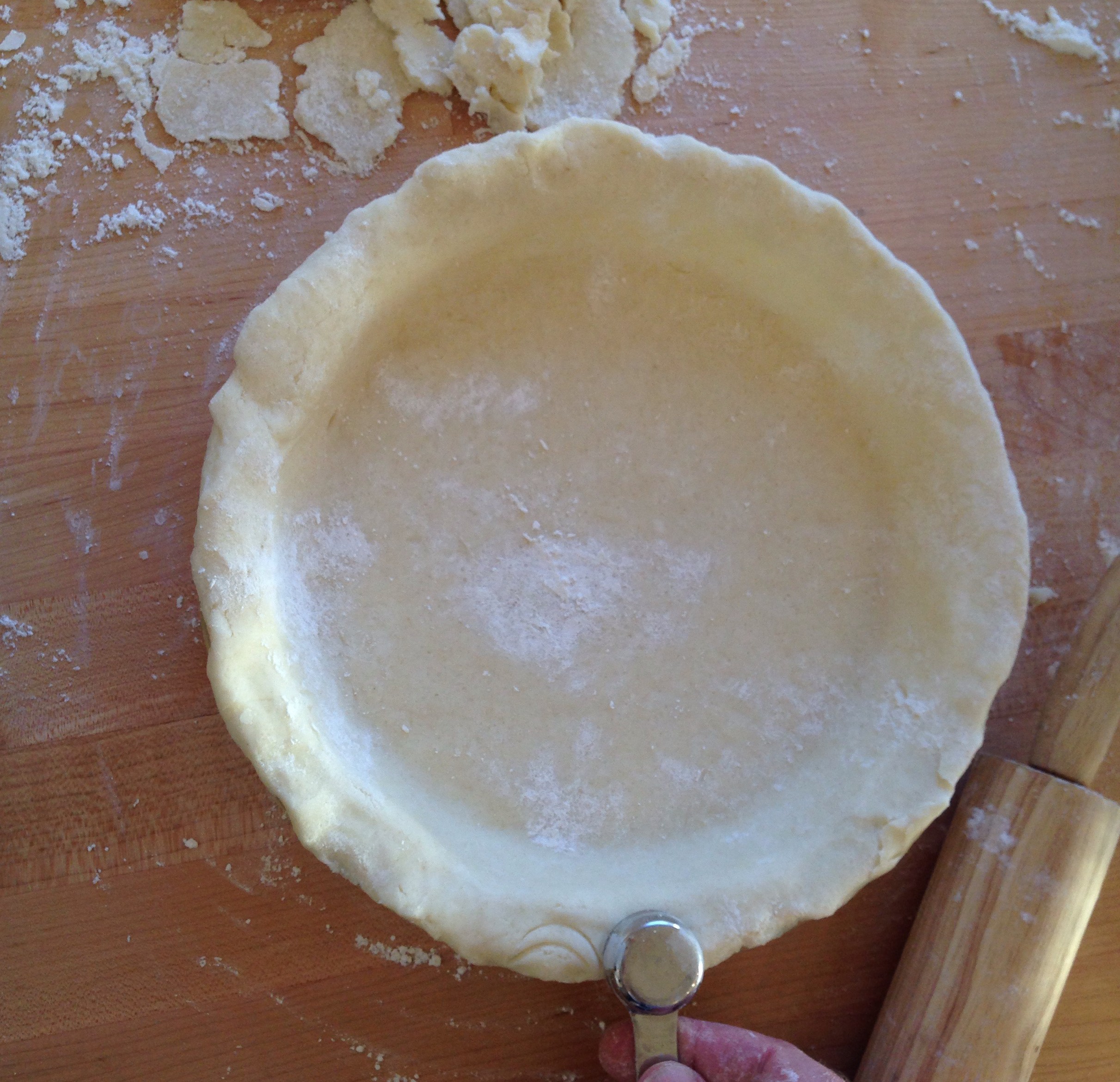 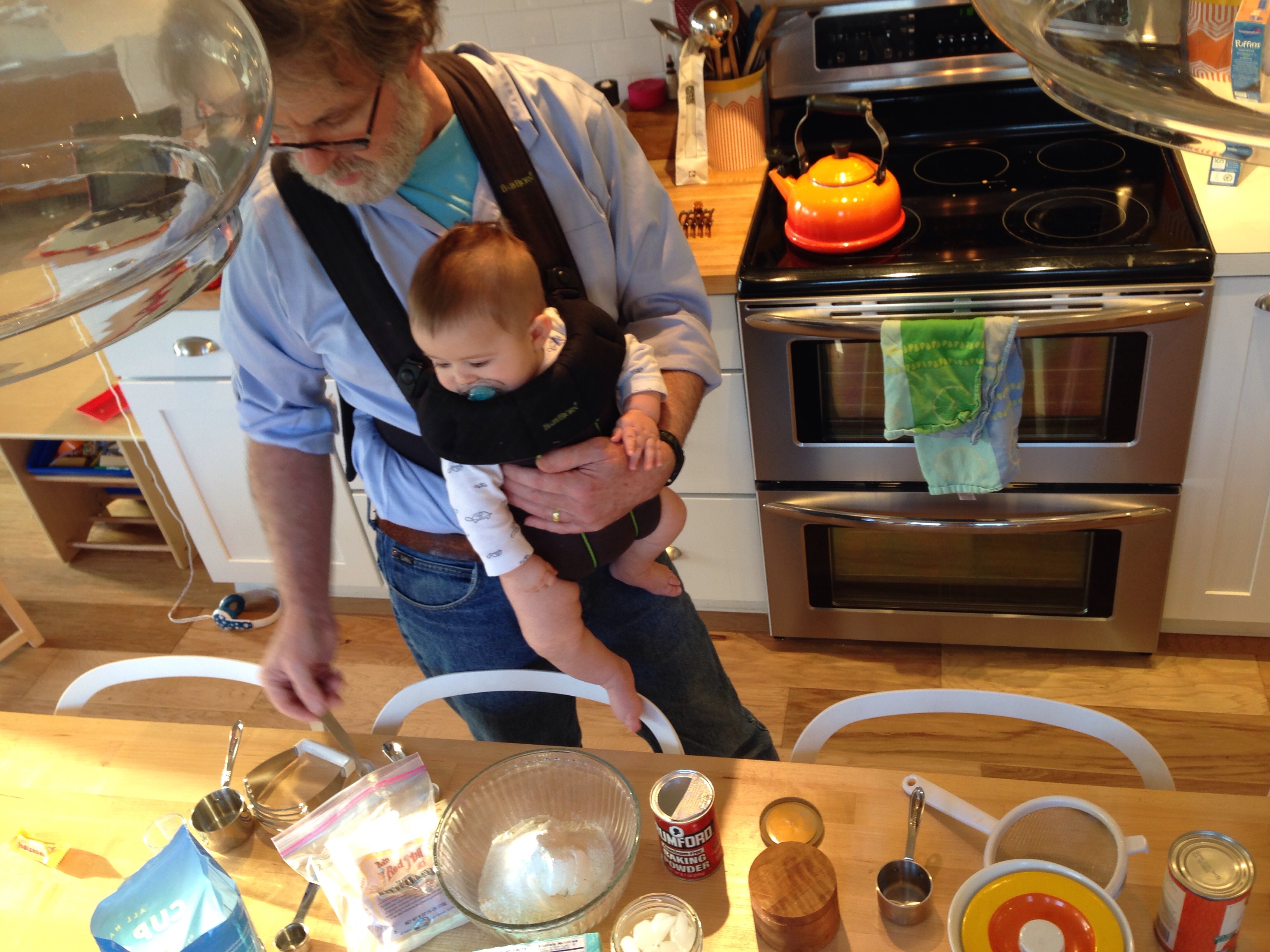 This is Uncle Tommy. He watches Neri two days a week. He is also the world’s best pie-maker. We call him His Pieness. Because my brother has celiac disease and I don’t eat wheat, Tommy has been perfecting a gluten-free version of his famous pie crust. He’s been working on it two and a half years and now it’s finally ready for prime time. (And he made it for me this week WHILE watching Neri. Best. Uncle. Ever.) You can follow this technique for wheat crust as well. But, if you have had all the terrible GF pie crust I have had, you will find that this recipe is a MIRACLE.

Step one, the ingredients: 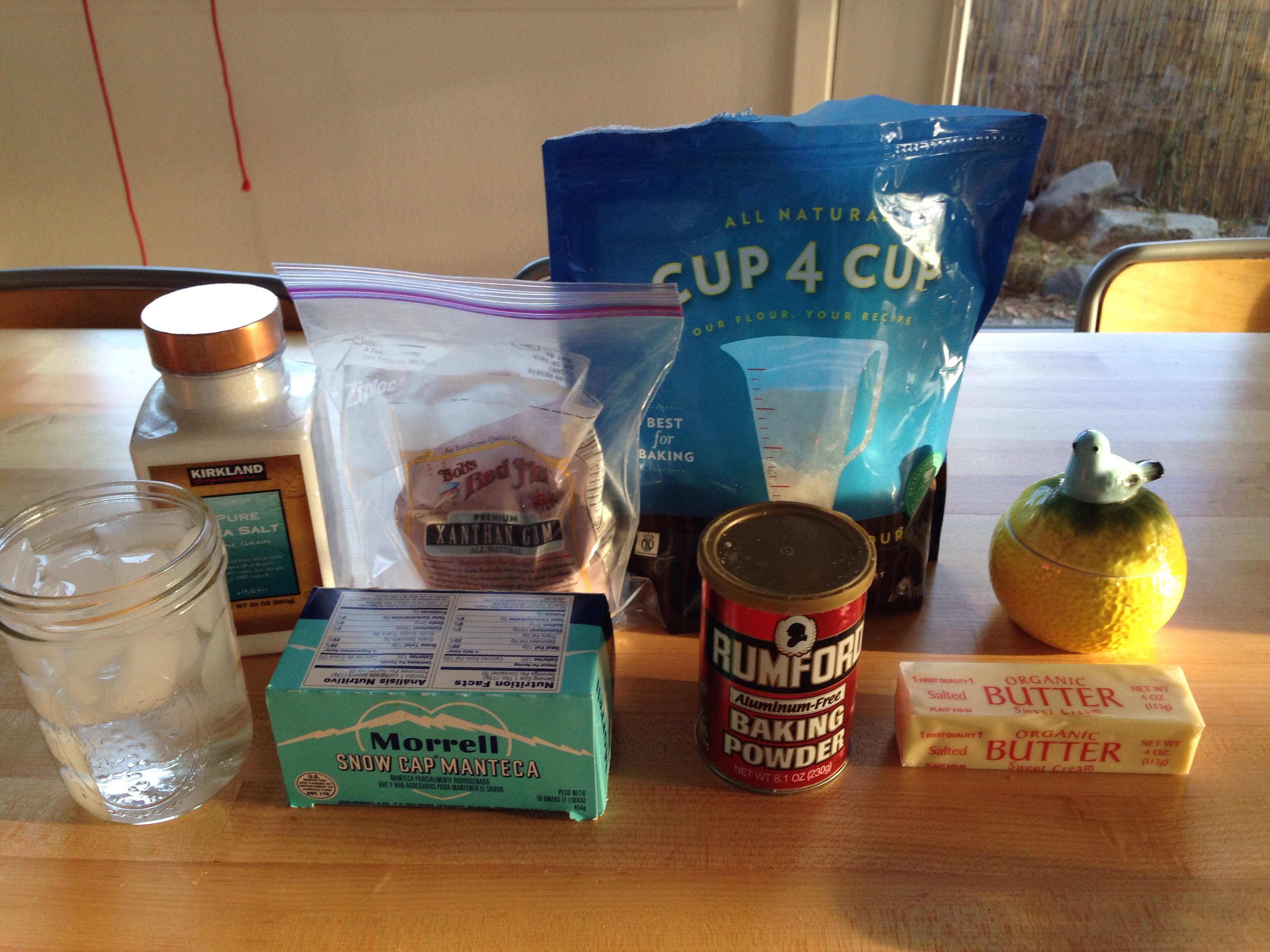 Yes, that’s lard right there. Don’t freak out. Unless you think you’re going to make pie every week. We used Cup For Cup GF flour. Other flours work as well. If you don’t have Cup For Cup, use half tapioca and half white rice. If you’re not gluten-free, Tommy likes King Arthur unbleached. (King Arthur GF flour is my favorite.)

Next, measure out the flours, the sugar and the salt. If you can’t handle the lard, just use salted butter, but omit the salt: 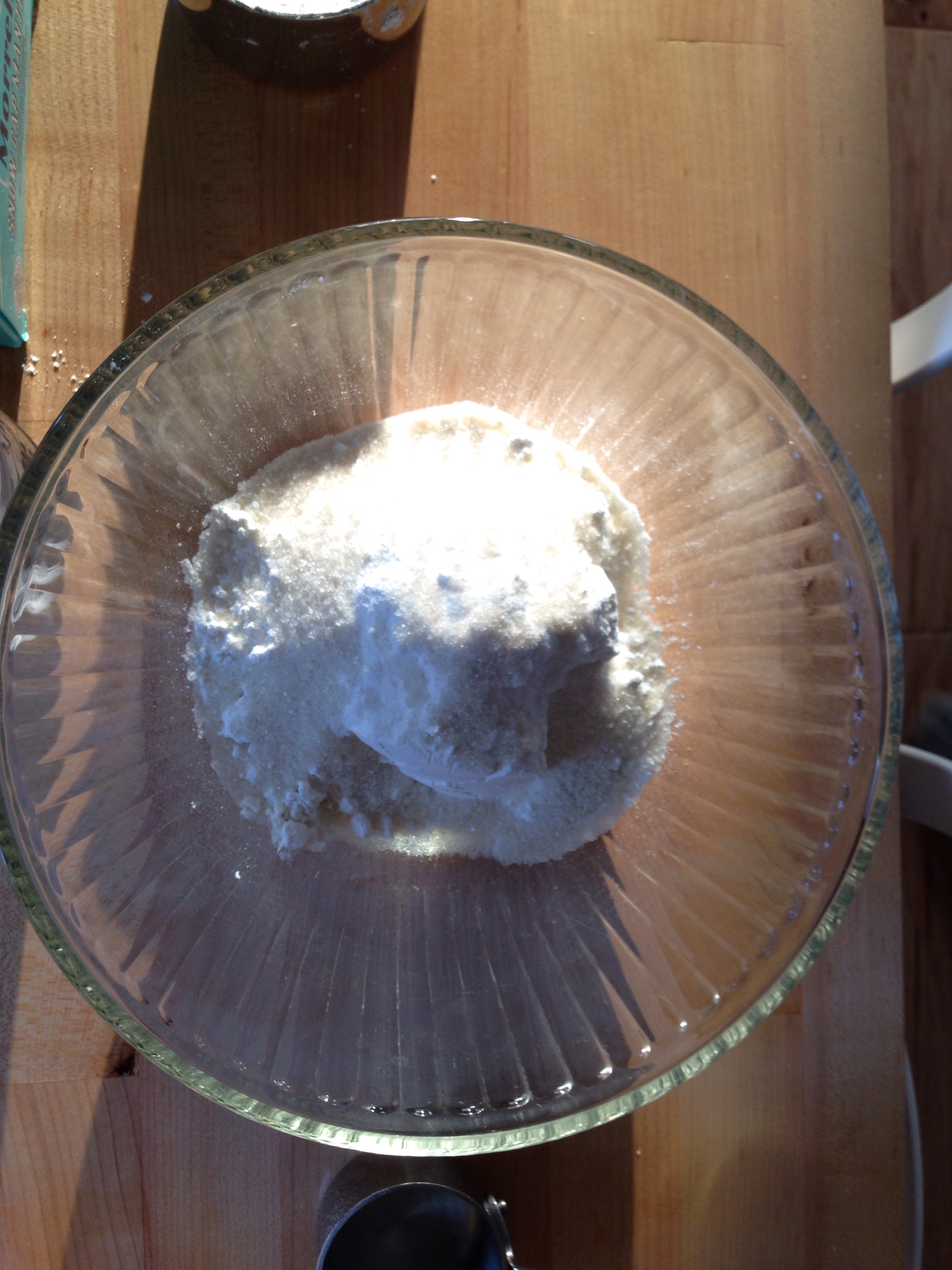 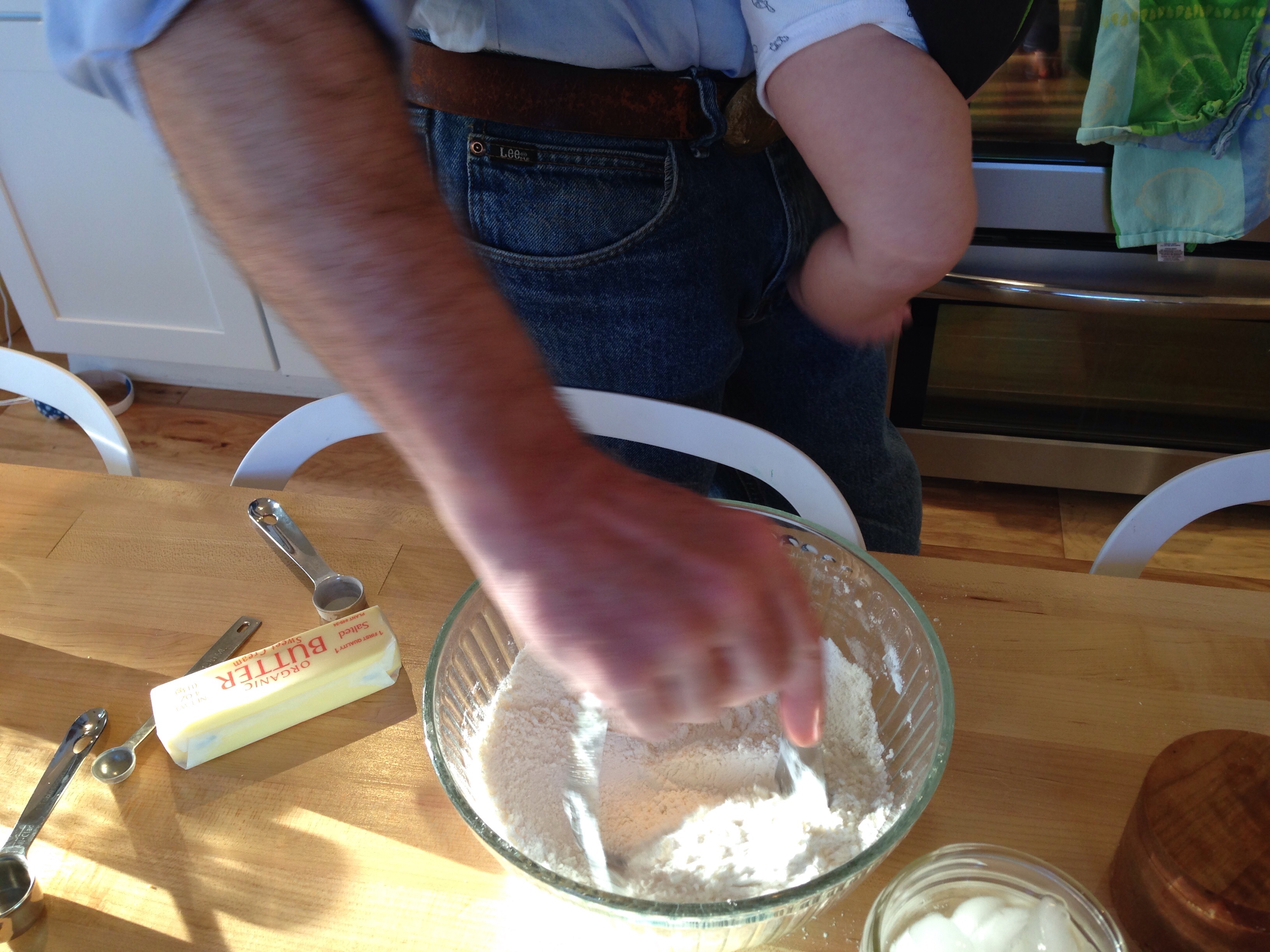 Now comes the fat. Tommy says the fat should be about 65 degrees. In Alaska, this is the temperature it gets to if you leave it out of the fridge for a half hour. (Not so in Hawaii.) It shouldn’t be hard, but it should be still firm to the touch and cool. DO NOT MICROWAVE IT. Because then your pie crust will suck. 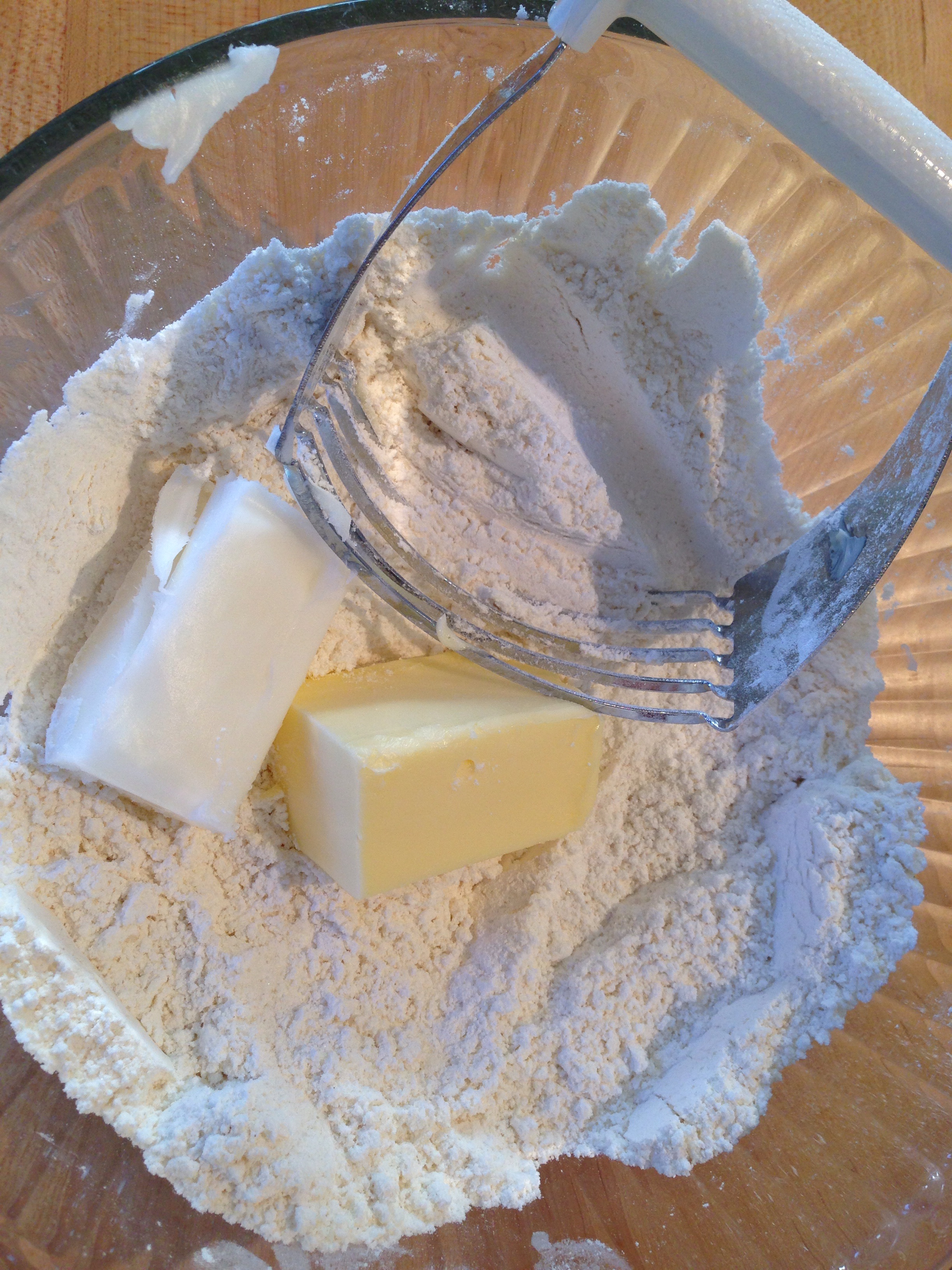 Next comes cutting the fat into the flour. “This has to be done with finesse,” Tommy says. He uses a pastry cutter. If you don’t have one, he says to wash your hands under cold water and then dry them before starting.

Here’s a video of Tommy mixing from start to finish. It takes 30 seconds. (Do just like he does, except you should probably try to avoid dropping a binkie in the bowl. )

Don’t overmix it. Crust making is a temperature thing. You want the fat next to the flour, not melted into it. At the end, there should be chunks of floured butter, about the volume of a pea but flatter in shape. (There are different schools on this point. Aunt Peggy, also a noted baker, disagrees with Tommy. She likes it uniform. She makes her pie dough in the food processor for this reason. You can too, if uniformity is your thing.) Here’s what Tommy’s mix looks like. 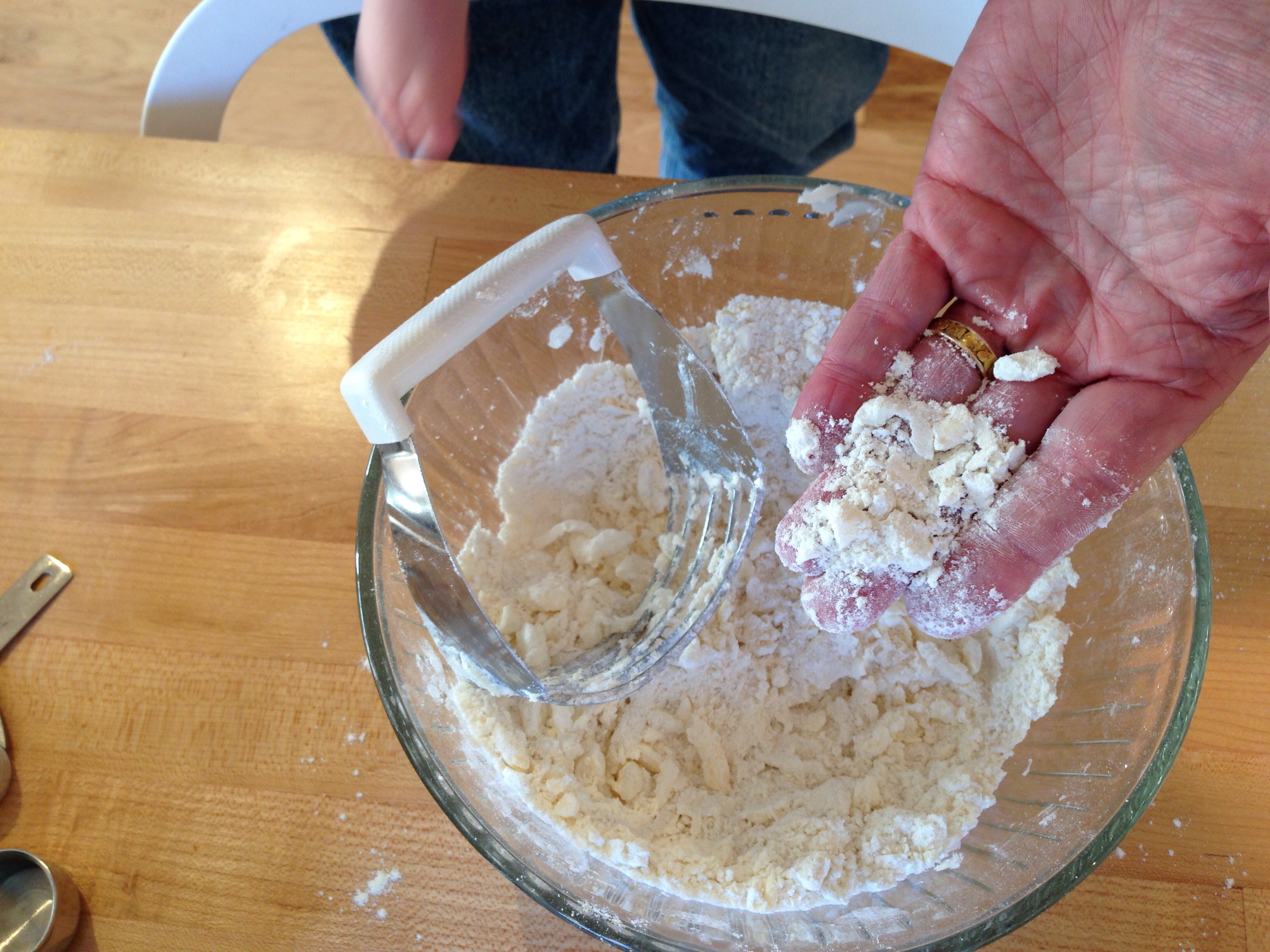 “The whole idea is the flour is up next to the shortening, but not melted into it,” Uncle Tommy says.

Now comes the ice water. Splash in one tablespoon. Then the next. 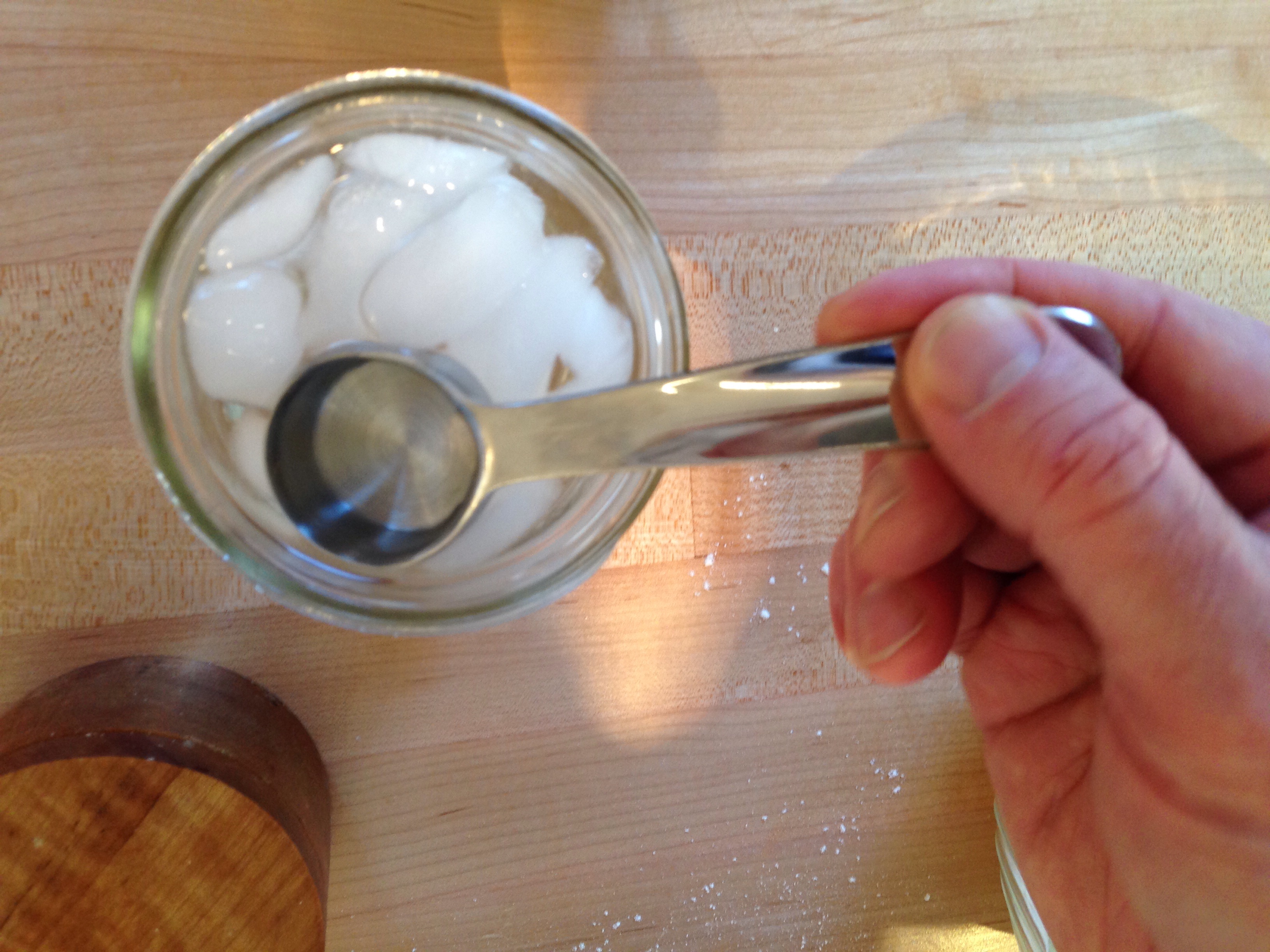 Mix it with the pastry cutter. It should start forming up. Add one more tablespoon. The dough should be about the consistency of Play-Doh. If it isn’t, carefully add a half tablespoon of water, mix, maybe add one more. GF flour tends to take just a little bit more water. 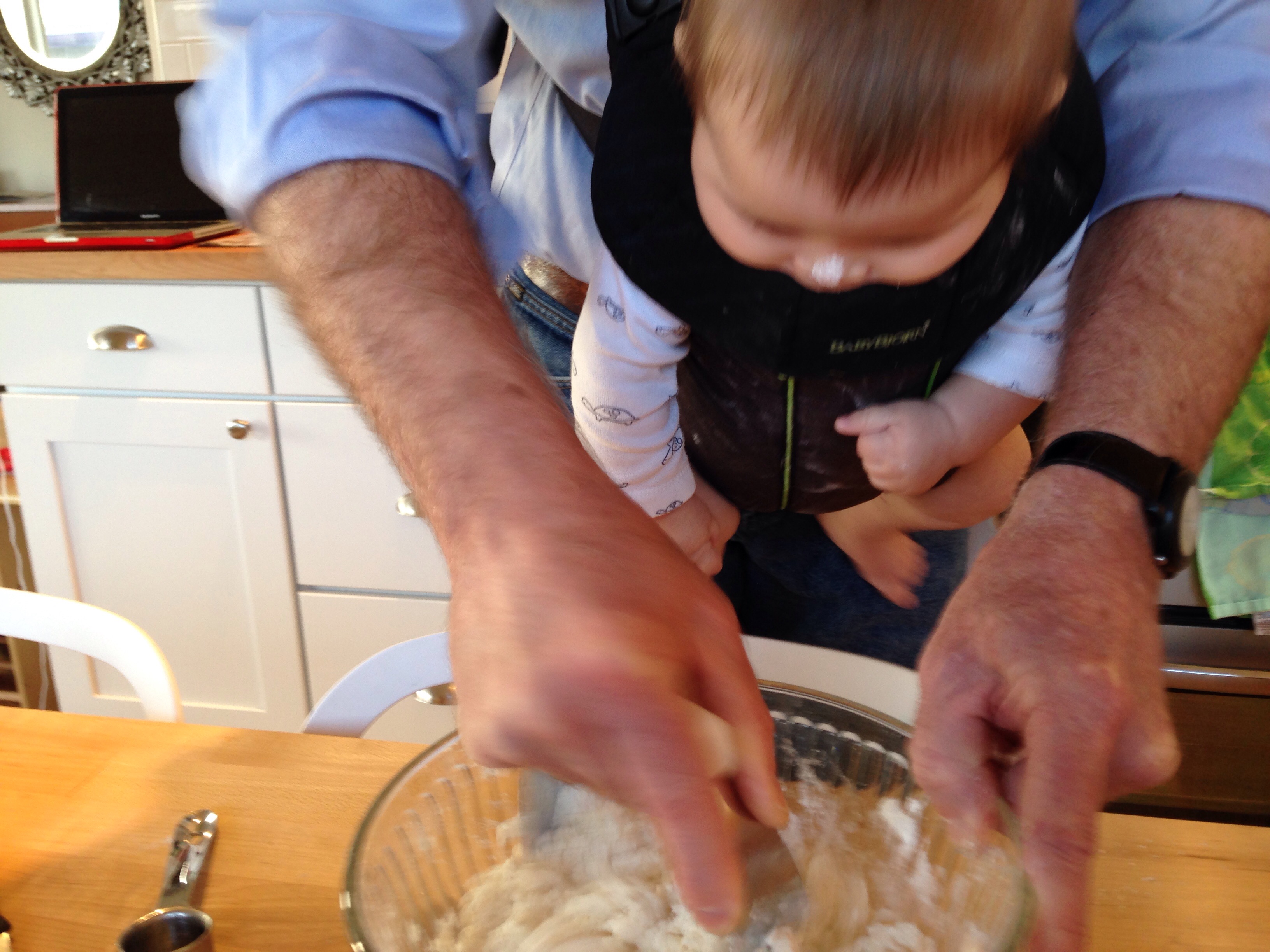 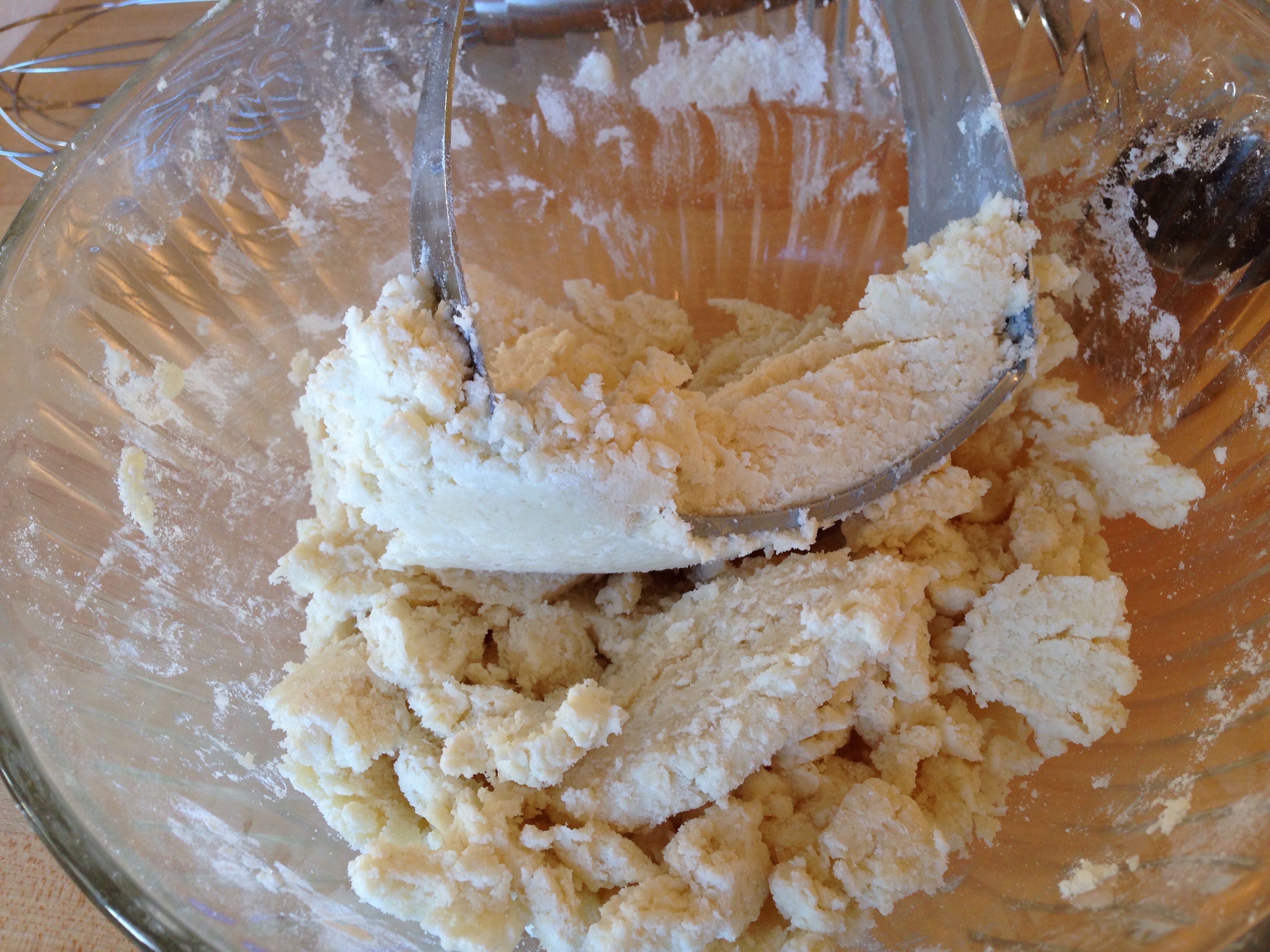 That up there is the texture you’re going for.

Now you want to press it together quickly with your hands. (Don’t knead it. You are trying to keep it cool.) Make it into a disk shape. 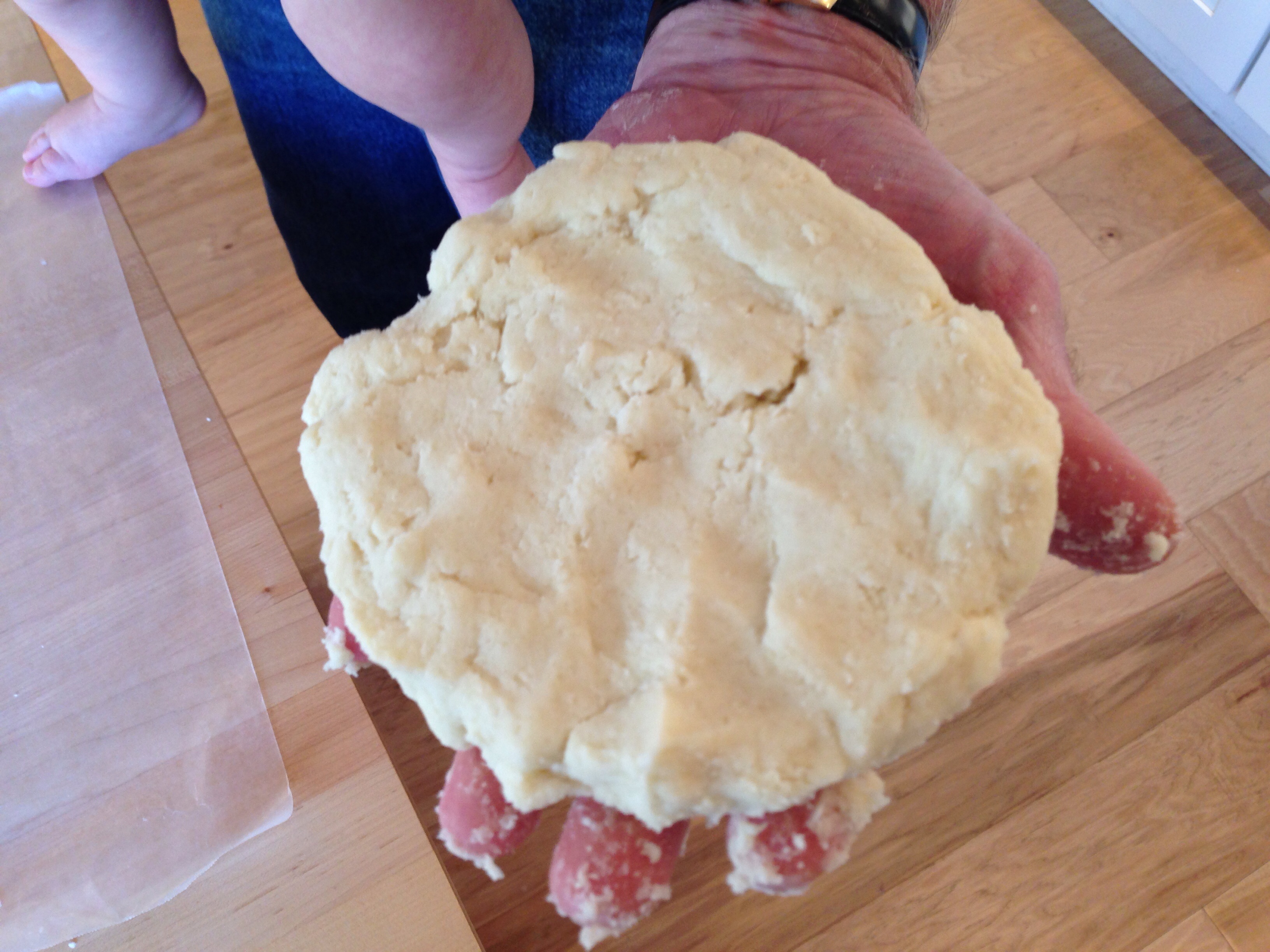 Put a generous amount of flour on the wax paper. Press the dough disk into it. Flip the disk over. Repeat. Roll it out. 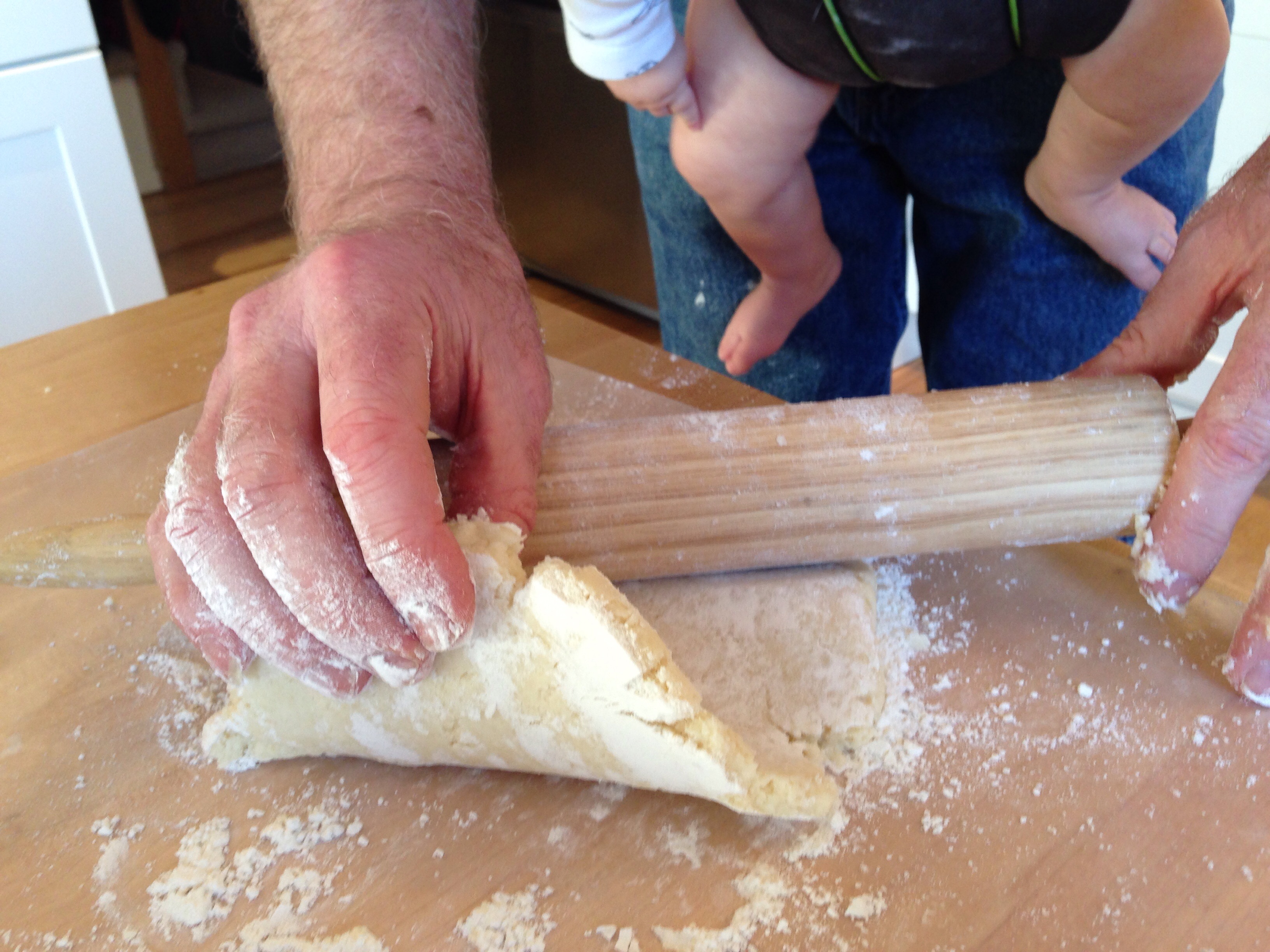 It should be roughly as wide as the wax paper and an eighth of an inch thick. 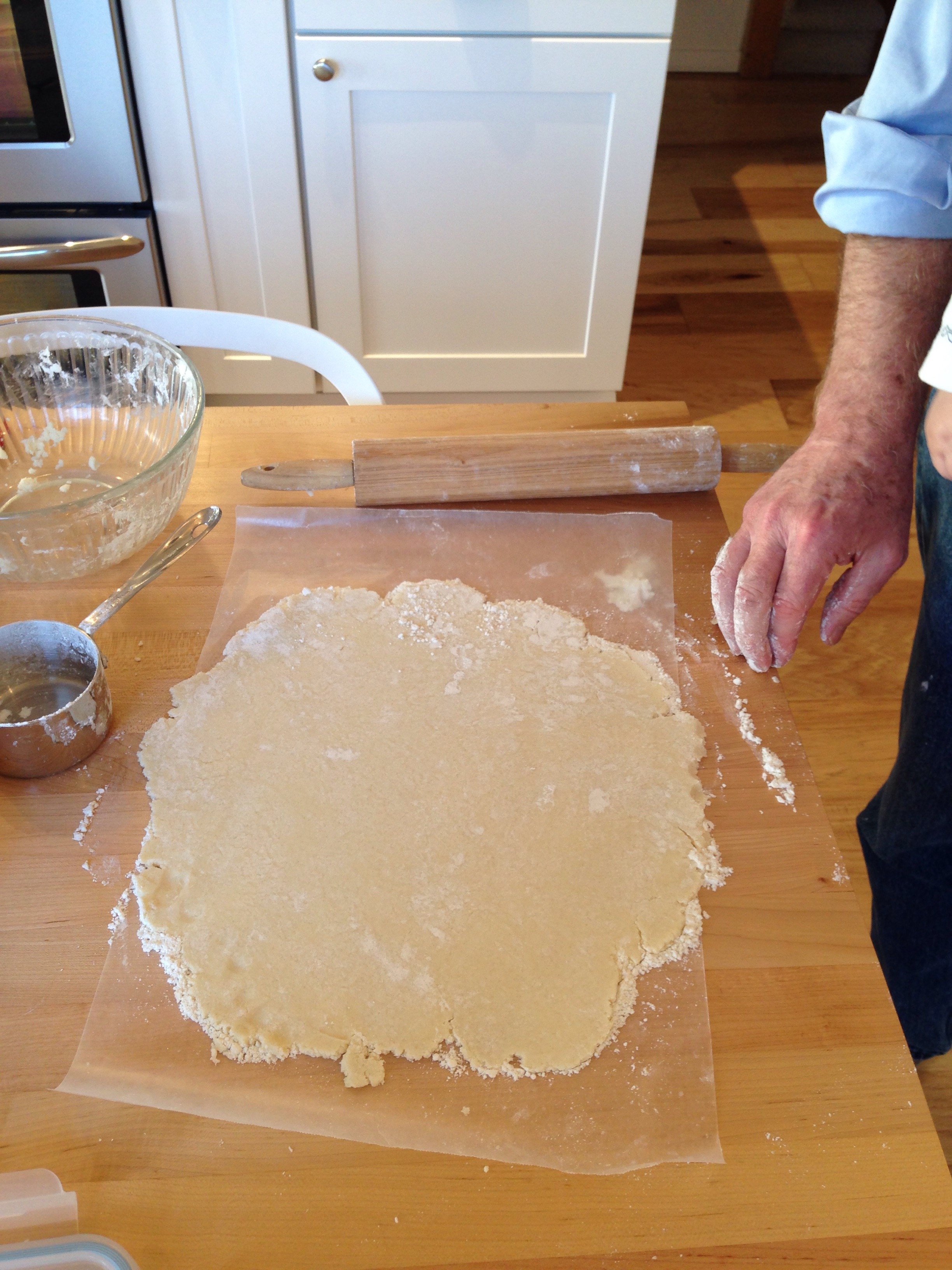 Carefully turn it over into the pie pan. In this case we used my Nonna’s pie pan. Tommy says her crust influenced him even if he was only related to her by marriage. 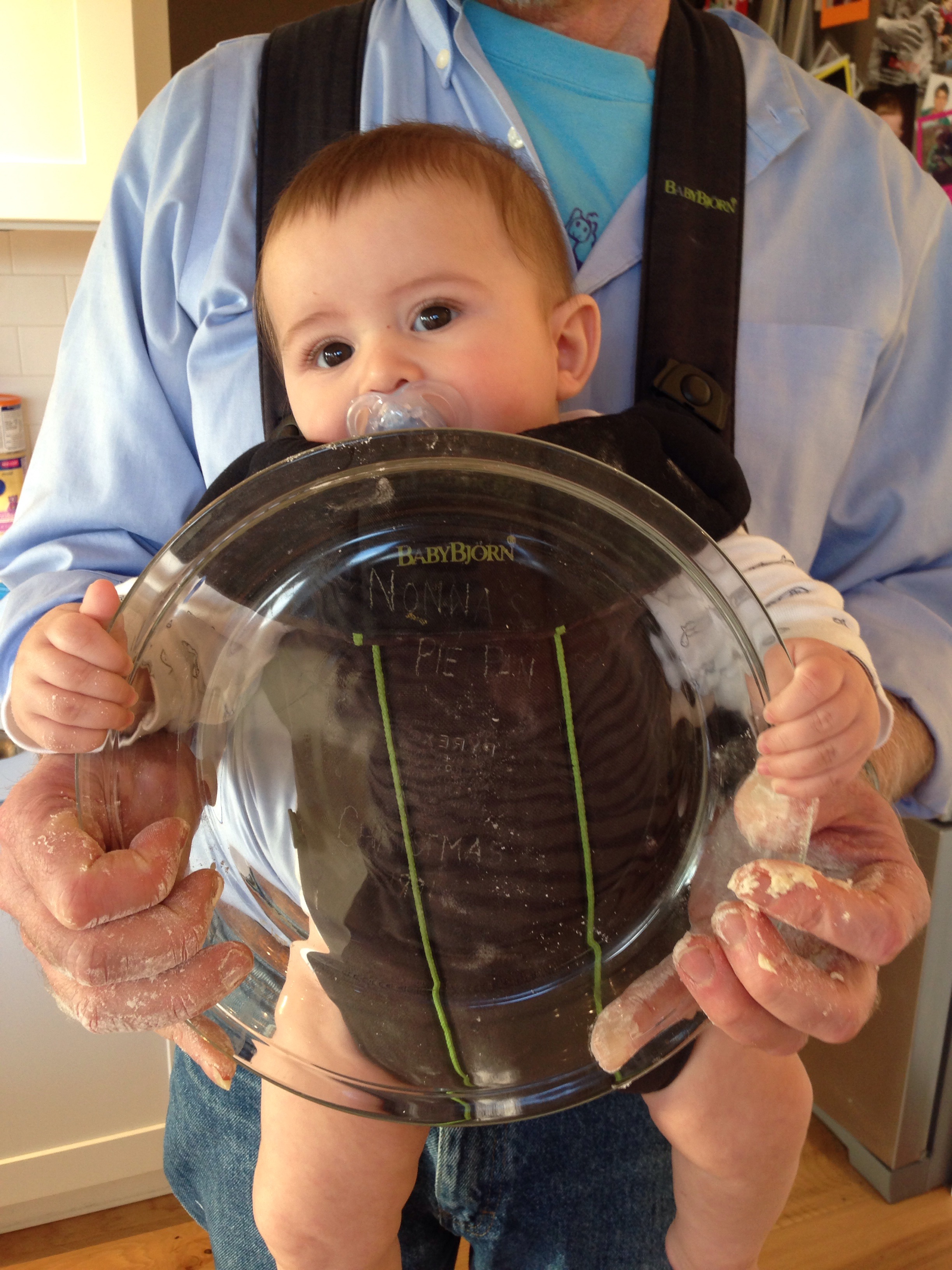 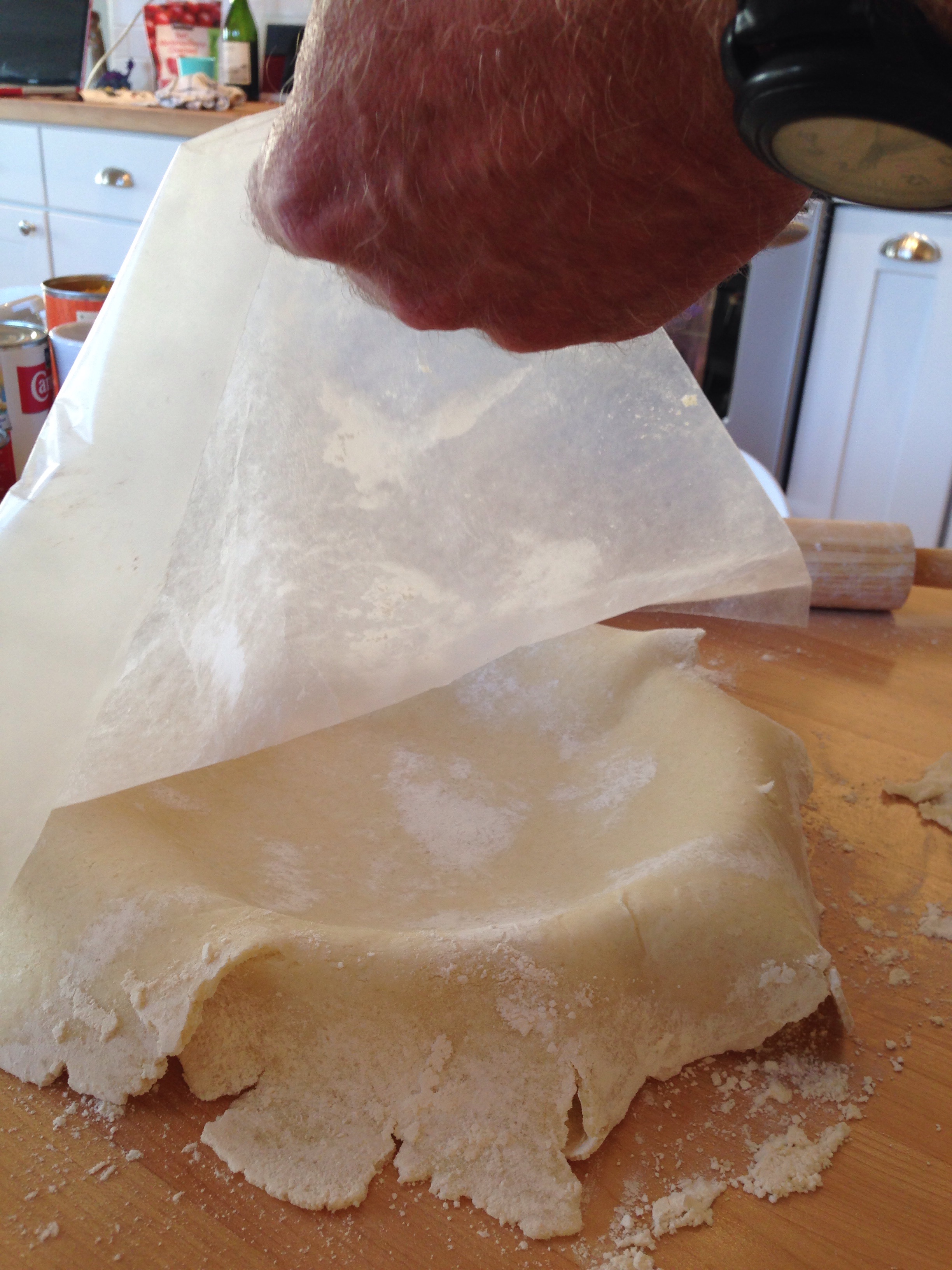 Tommy says it’s natural for GF crust to crack a little on the inside. Do your best to repair.

“Nobody sees what’s under the filling.” 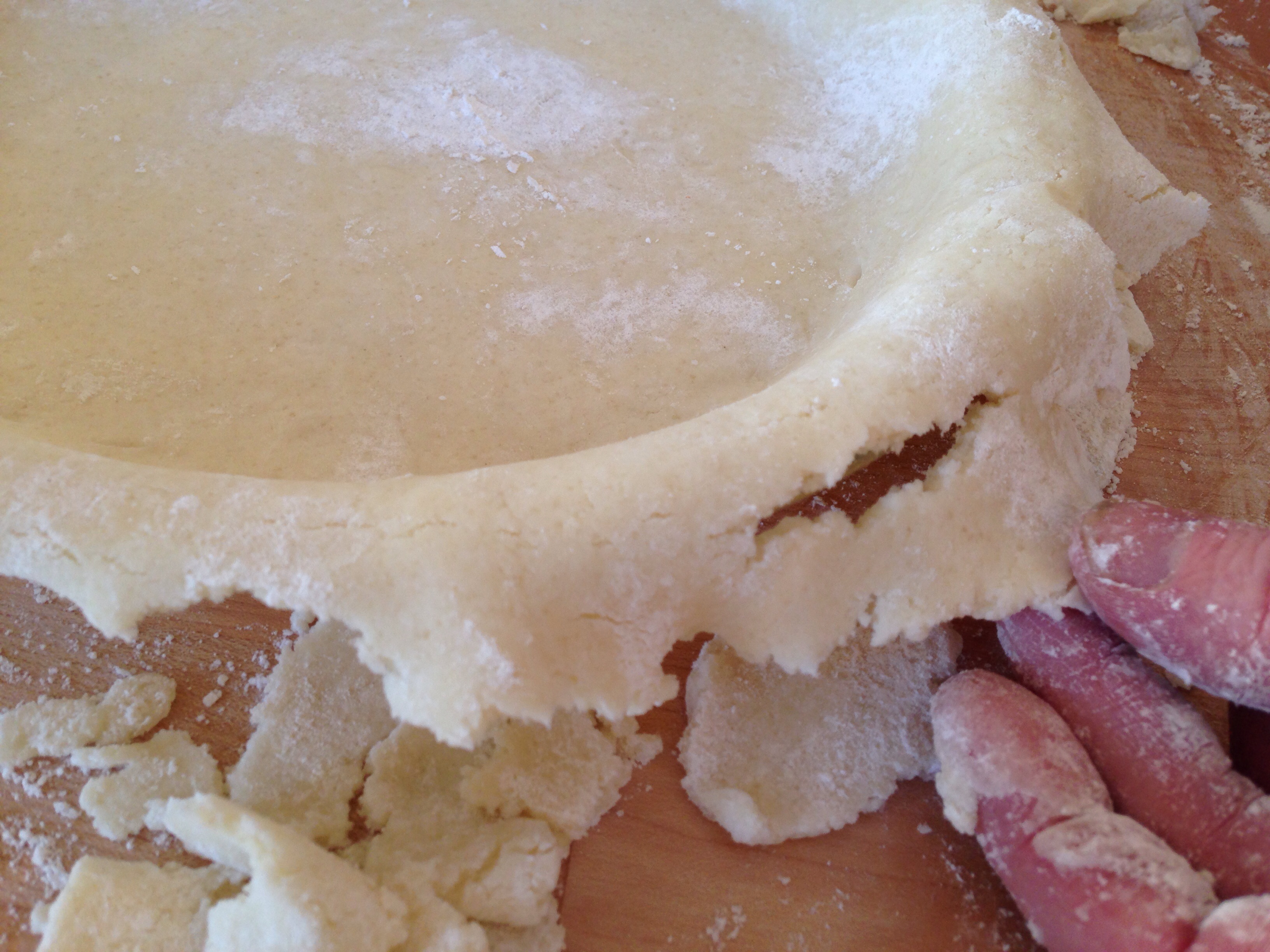 Remove the excess. And smooth out the edges. 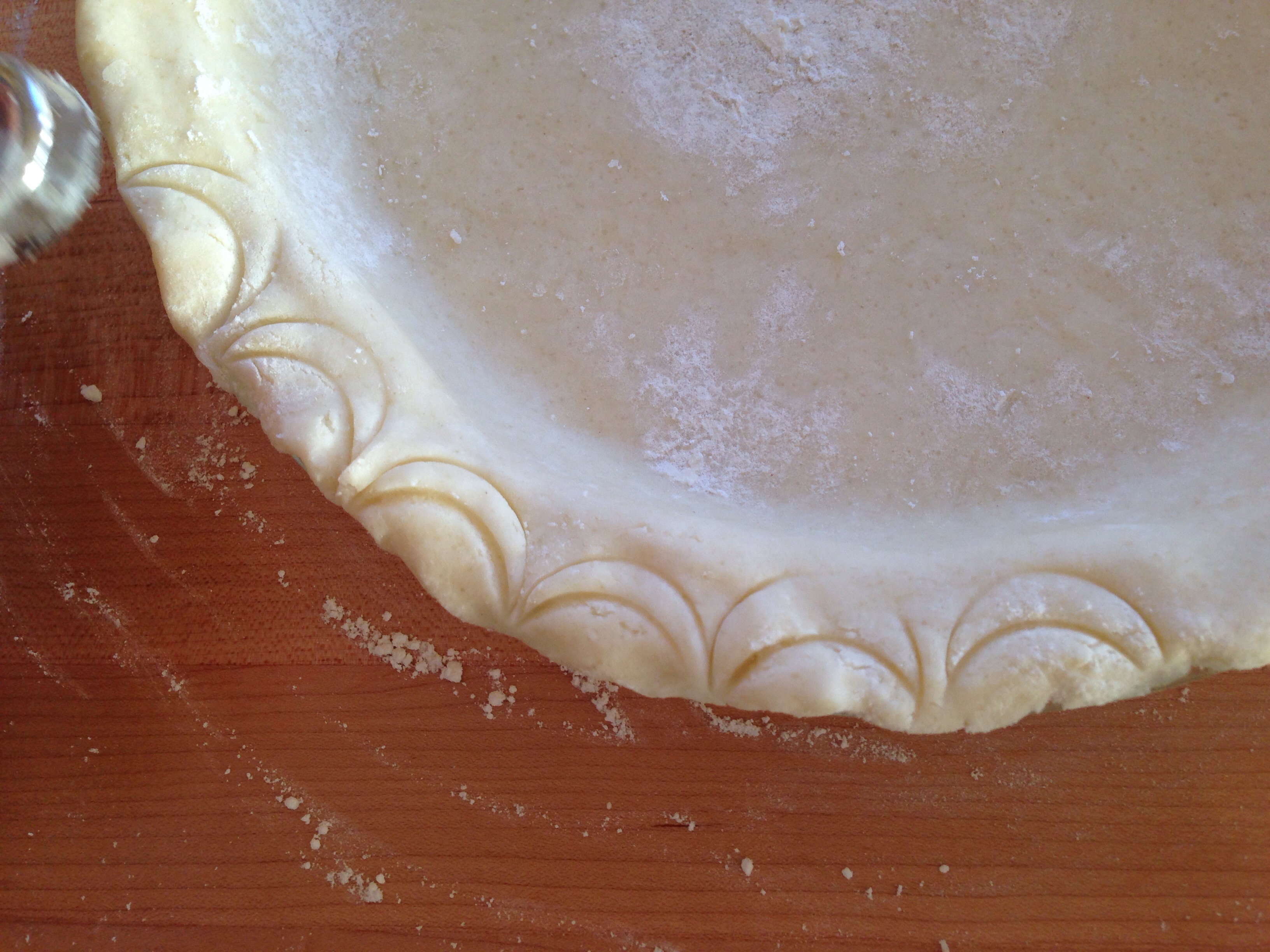 Tommy uses a measuring spoon to make it fancy.

We’re going to make a pumpkin pie, but you can now use it however you like. One last touch: Tommy always puts an egg wash on. 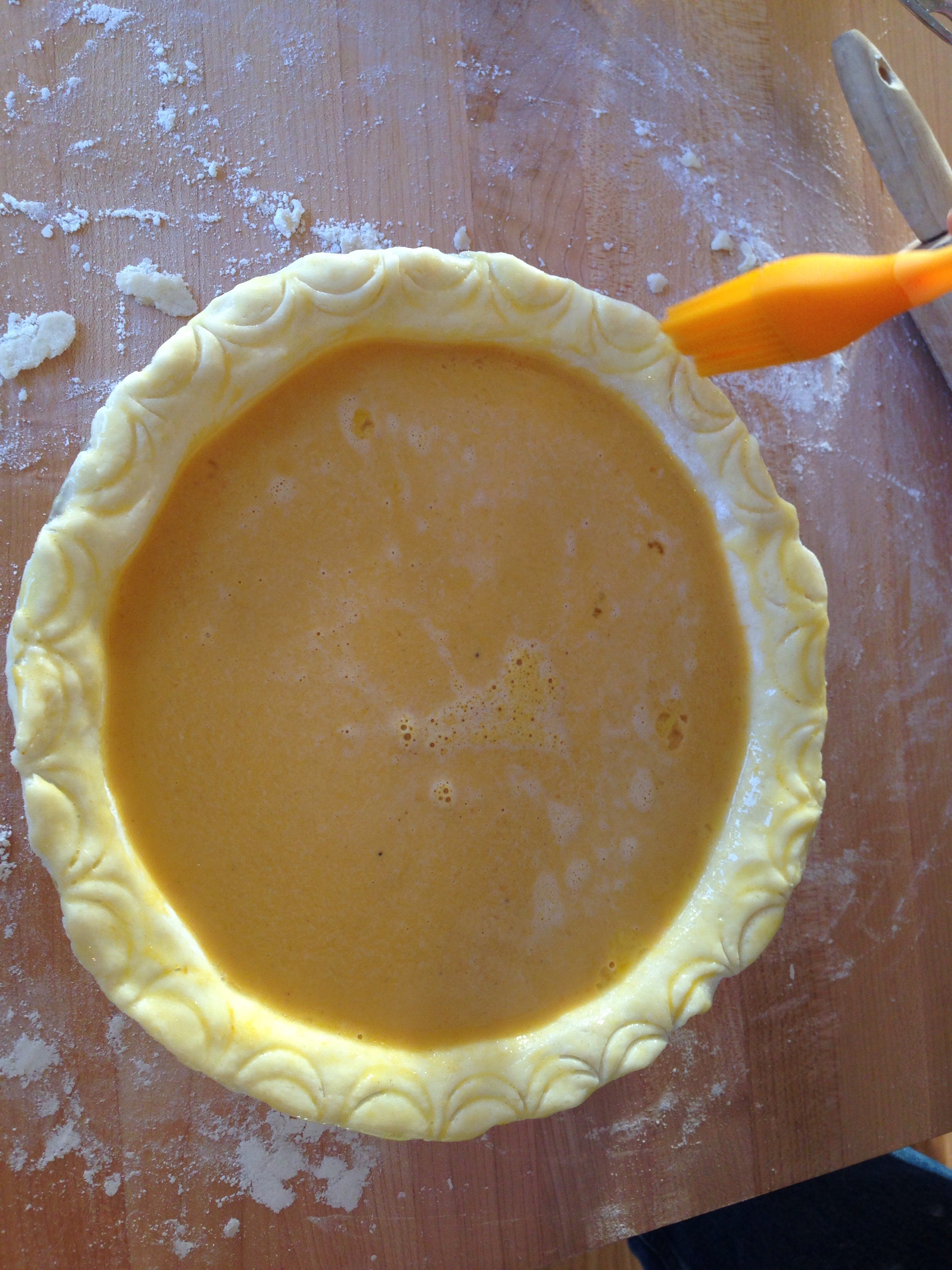 Here’s the recipe (makes one crust; double it for two):

Instructions: Mix flours, salt, xanthan gum. Sift in the baking powder. Combine. Using a pastry cutter, quickly cut the fats into the flour mixture. Combine until the fat is in small pieces, about the volume of peas, but flatter and less uniform. Splash in 2 tablespoons cold water. Mix with the cutter. Add an additional tablespoon. Dough should be starting to form. If it’s too crumbly, add a little more water. (GF tends to take more water, wheat flour takes less.) The texture should be similar to Play-Doh. Form it into a disk but don’t knead. Flour a sheet of wax paper. Press the disk into the flour. Flip and press the other side, so both are well floured. Roll out until the tips of the dough circle reach the sides of the wax paper. It should be about 1/8 inch thick. Carefully turn over into a pie pan. Trim and smooth edges. Brush with egg. Use for your favorite pie filling recipe.