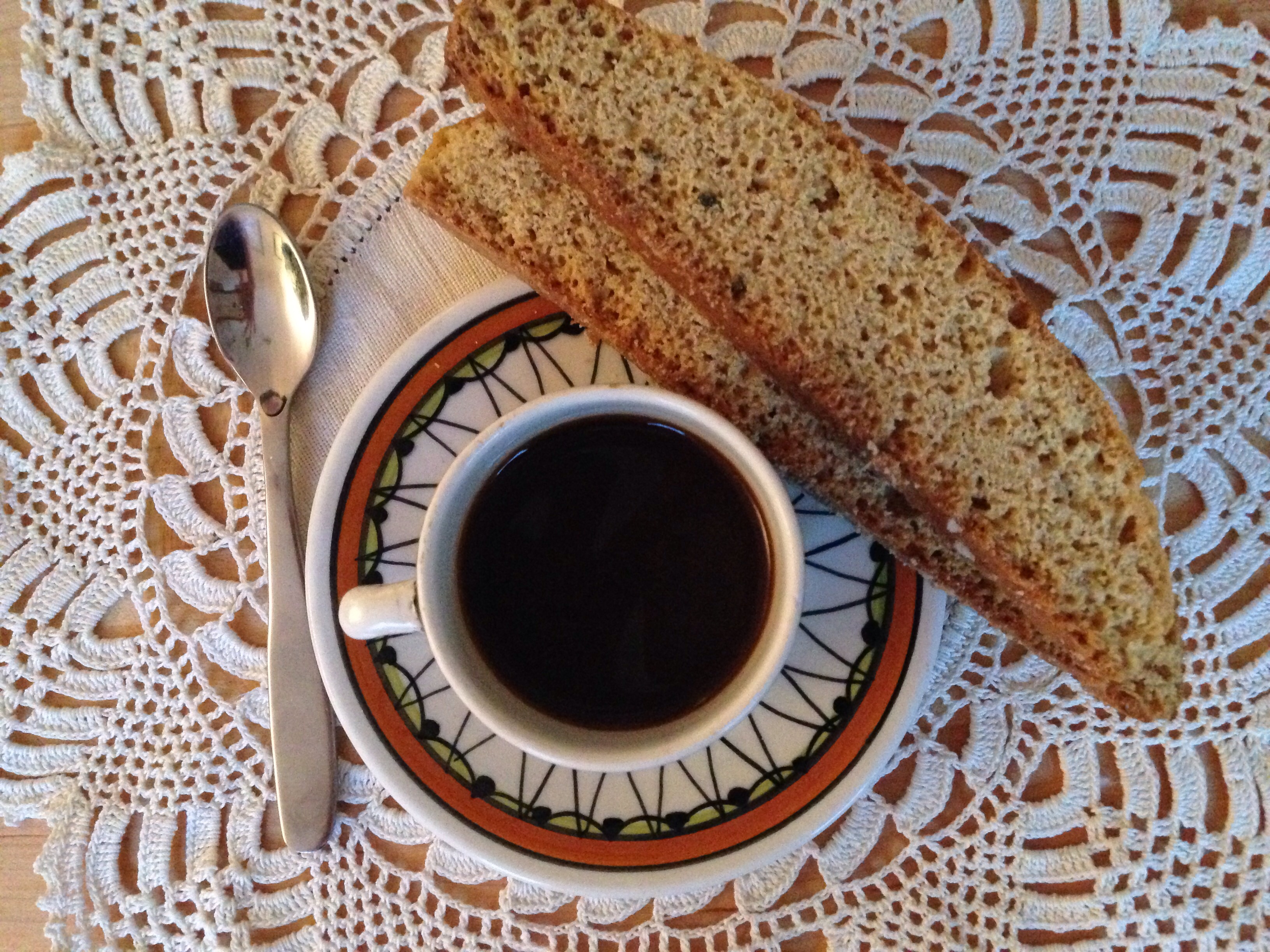 Uncle Tommy and I have been perfecting our Christmas biscotti recipe for a while now. The first time we made them, I’d just found out I was pregnant with my son. Now he’s three. Dang, time just whips by, doesn’t it? When I asked Tommy what he remembered about our first biscotti adventure he said, “We made a whole bunch of them, but none of them turned out very well.” That’s a pretty good assessment.

The next year. we did our research, delving into family recipes. My family biscotti recipe comes from my grandmother, Lidia. Here she is right here:

Look at the Euro bangs! Anyway her yolk-yellow anise biscotti, thin-cut and crispy, absolutely taste like Christmas to me. She grew up in Florence, and I always imagined that she carried her biscotti recipe from there, like, maybe, written on one of those pieces of Florentine stationery. But then I looked in her recipe box and I found out where the recipe actually came from:

Alrighty then. Festive foreign fixin’s. Not the easiest thing being an Italian immigrant in the 1960s in Anchorage, Alaska. Here’s the thing about that recipe, though: when Tommy and I made it, it wasn’t that good. It tasted sort of like I remembered, but the texture was all wrong. My grandmother must have doctored it one way or another, but she died in 1999, so I couldn’t ask.

It happened that around the time we were making the biscotti, a tin arrived from Sara’s Aunt Maria in Leechburg, Pennsylvania. In it were biscotti made from a recipe belonging to her centenarian great aunt Nota. Sara’s family is also Italian and Nota worked at an Italian restaurant for maybe 70 years, making ravioli, pies and other baked goods, including biscotti.(Nota’s full name is Domenica, which is Sara’s middle name.)

We called up Aunt Maria and got Nota’s recipe. It was pretty old school, written for restaurant quantity and called for Oleo and butter flavoring, but when we made it, the biscotti had the most perfect texture. I wrote it on the back of an envelope and Tommy kept in it his recipe collection. Here is what it looks like today:

We experimented with combining the two recipes until we developed a biscotti recipe that was light, crisp and not too sweet. But then, after I had Leo, an allergy I had to wheat became severe. And so it was back to the drawing board, but we experimented again and now I think our GF version is ready. Here’s how it goes (there are notes for making the regular version as well):

You begin by mixing the dry ingredients. Tommy always sifts his baking powder in. Then you whisk it really well. Next mix the eggs, melted butter and the sugar in another bowl.  We add vanilla (and eventually anise, an acquired taste (Tommy hates it) but you could add almond flavor, which is more in keeping with Notta’s style. In that case, you can add almonds to the batter instead of anise seeds and dip the cookies in dark chocolate later on.

Now you want to mix in the dry ingredients and the anise.  This is the delicate part. You’re going to have to add more flour. If you’re using regular flour, it won’t be that much. If you’re using GF flour, then it will be more. The key is that your dough is structured enough to hold the shape of a loaf on the sheet pan.

Now you want to divide the dough in two on a parchment-covered sheet pan. You will probably need to flour your hands to shape the loaves. They should be rectangles (do your best).  Like this. Tommy likes to brush them with beaten egg.

Now bake them for 20 minutes or so in a 400-degree oven until the loaves have a hollow sound when you tap the top. It will look like this:

Then take the loaves out and let them cool at least 20 minutes. After that, slice them on the diagonal, in slices no more than a centimeter wide. Place the slices on a cooling rack and place the rack back on the sheet pan. Put them in a 200-degree oven for about 20 minutes until they crisp up. After that, I also like to leave them out overnight for extra staleness. Dip them in your coffee.

– 2 cups + 1/2 to 1 cup additional King Arthur Gluten-Free flour (for regular wheat flour, it would be less additional flour, maybe 1/4 cup -1/2 cup… Go slow and watch the video to get the texture right.)

Whisk the dry ingredients to together, except the baking soda. Sift that into the dry ingredients. Mix eggs, sugar, melted butter, vanilla and anise. Combine dry with wet and then add a little extra flour until your dough has enough structure to be formed, a thicker than the texture of thick muffin batter. Flour your hands and shape the dough into two rectangular loaves on a parchment-covered pan. Brush with beaten egg. Bake 20 minutes or until the loaves sound hollow when you tap the tops. Cool for at least 20 minutes. Slice on the diagonal in thin slices, no more than a centimeter wide. Put on a cooling rack, set the rack on top of a pan, put in a 200 degree oven for 20 minutes. For extra crispness, leave out overnight.