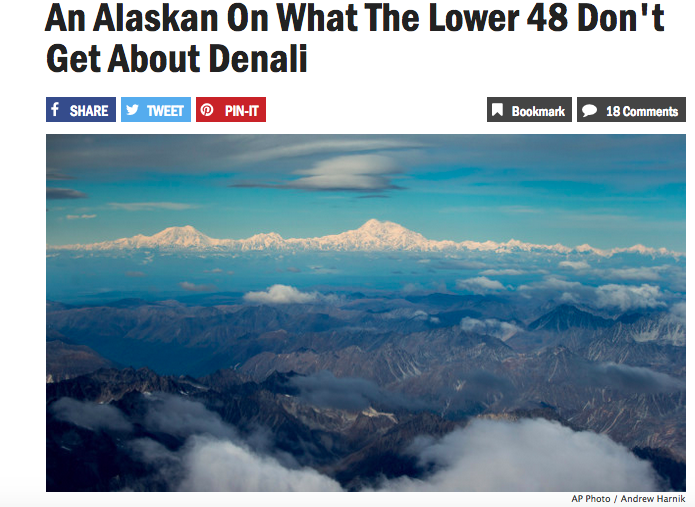 (I got a note early yesterday asking me to explain how Alaskans feel about the Denali/McKinley thing. Here’s the best I could do…)

While Lower 48 politicians might have partisan heartburn over President Barack Obama’s decision to change the name of Mount McKinley to its Koyukon Athabascan name, Denali, you’d be hard pressed to find many Alaskans, conservative or otherwise, with objections.

“We’ve been calling it Denali since I moved up here,” Dave Stieren, a conservative talk radio host for KFQD-AM in Anchorage told me. “To me it’s like happy holidays/merry Christmas. Anybody who cares about it too much is not someone I’d like to hang out with.”

At Monday’s GLACIER conference on Arctic issues, put on by the State Department in Anchorage, one of the biggest applause lines came during Secretary of State John Kerry’s remarks introducing Obama, who is spending part of the week touring Alaska.

“I think we can say that Denali never looked better than it does today,” Kerry said, drawing hoots and whistles from a crowd that had until then stuck to polite clapping.

Alaska is a conservative state. Registered Republicans outnumber Democrats by a wide margin, but the state’s brand of conservatism has a pro-development, anti-government, libertarian flavor. Most people don’t see the mountain’s name change along partisan lines. Instead, some see it as a victory in the state’s long public lands tug-of-war with the federal government, while others, especially in the Alaska Native community, see it as a victory for indigenous rights. And pretty much everybody has been calling the mountain Denali for years.

There’s also something worth explaining about the culture here. We put Alaska-ness before all else, and tend to view outsiders with suspicion. In Alaska, nobody really cares if you went to Harvard, but if your grandmother was buried here, you should say so because it gives you cred. I think this is because there are only 700,000 people in this state and a whole lot of dangerous country, animals and weather. People from very different backgrounds tend to find themselves relying on each other, so we care most about stuff like whether you are the type to carry a tow strap in your truck and would be willing to pull us out of a ditch in a snowstorm. Politics come way second. Our loyalty to Denali over McKinley is driven by the same impulse. Denali is ours, it comes from here, it carries a tow strap. McKinley isn’t and doesn’t.

6 thoughts on “For Talking Points Memo: What the Lower 48 doesn’t get about Denali”