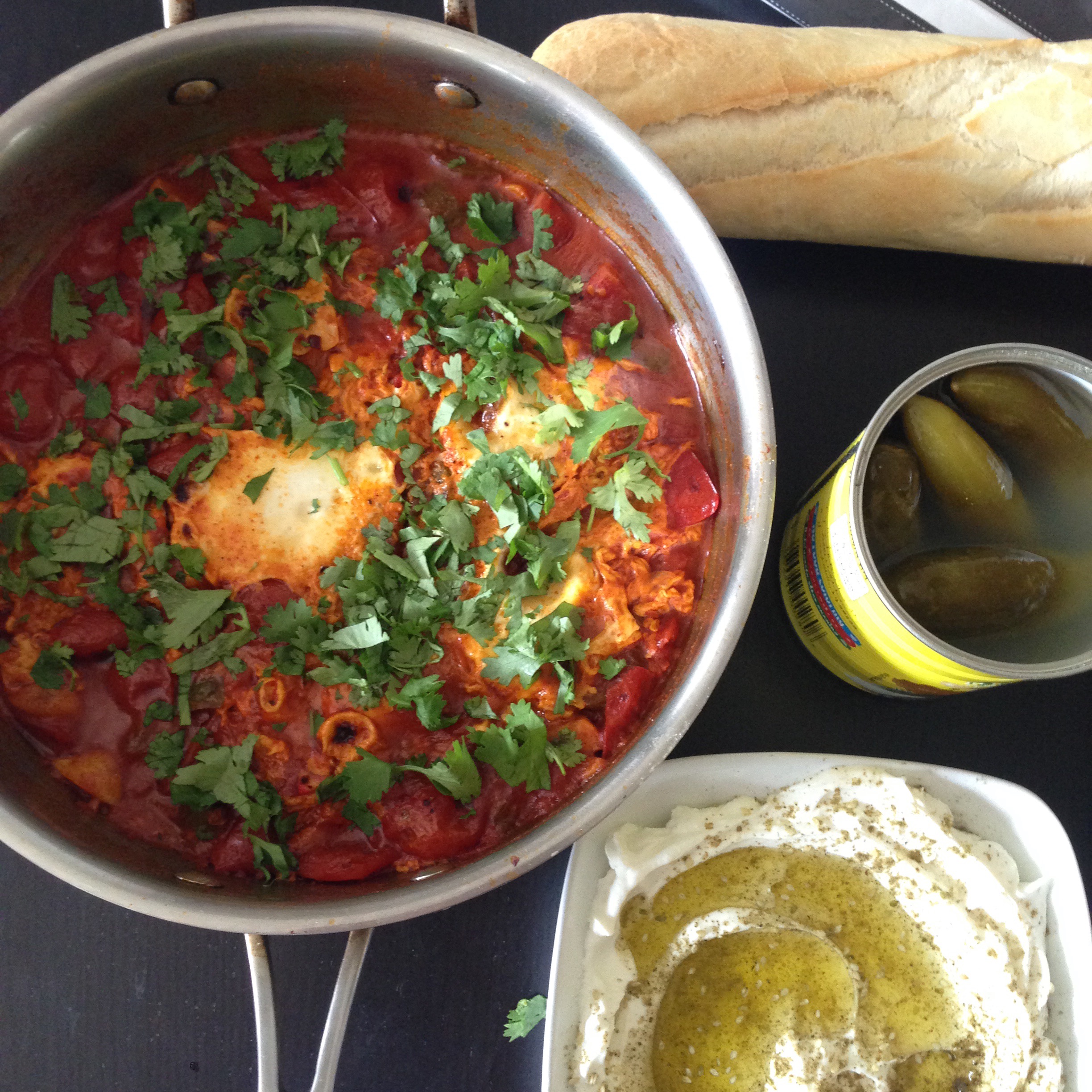 Noam and I both grew up in Israeli homes with American parents. His was a religious upbringing where Saturday mornings were reserved for waking up early and walking to synagogue for a morning service. Mine were the lazier version: we slept in, my dad would lay around in bed with the Friday newspaper (the Israeli equivalent of the Sunday edition), and my mom would take on the role of short-order cook, whipping together pancakes, waffles, elaborate omelets or cinnamon toast like nobody’s business. It was a rare occasion when my dad would cook us breakfasts on Saturday (or any day, really), but when he did, it was almost always shakshuka. And it was always delicious. For some reason, in Noam’s family it was his dad who always made shakshuka too. Must be a guy thing.

You may have heard of it. Shakshuka (pronounced shahk-shoo-kah) is all the rage now in cities like Portland and the likes, trending on the brunch menus at chic restaurants like Levant or Tasty-n-Sons. It’s like the new hummus. In its most basic form, this North African dish is a one-skillet combination of a garlicky tomato sauce, warm spices and eggs broken over the sauce and baked on the stove or in the oven, preferably under the broiler, until no longer runny.

For years, Noam and I would fantasize about including shakshuka on the menu of our dream restaurant. It’s a staple in Israel, and is usually served up in a sizzling cast-iron pan with a half loaf of Israel’s subsidized (dense and comforting) white bread, fresh out of the oven. Spicy or mild, with red peppers, or without, with cumin or just with paprika, with merguez sausage or just plain – every person has a recipe they swear by.

My favorite accompaniment to shakshuka is Labneh, a middle eastern, strained yogurt cheese that is most often served with a drizzle of olive oil and za’atar seasoning.

For this blog’s purpose, we decided to go with the more basic version, though there’s nothing basic about its flavor.

Here’s what you’ll need (minus the spices): 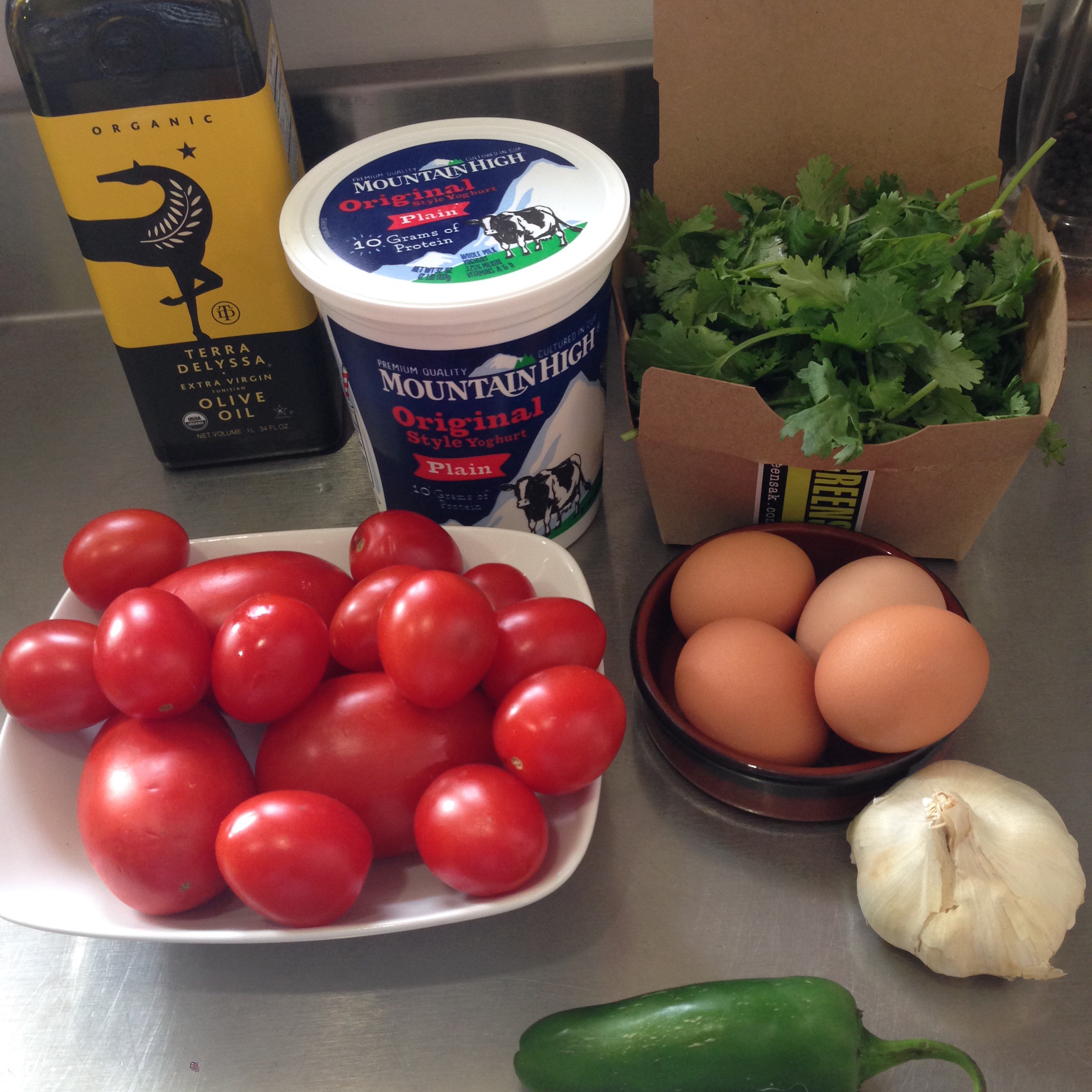 Start with peeling and chopping about 10 garlic cloves. You don’t necessarily have to mince them. We like them chunky. 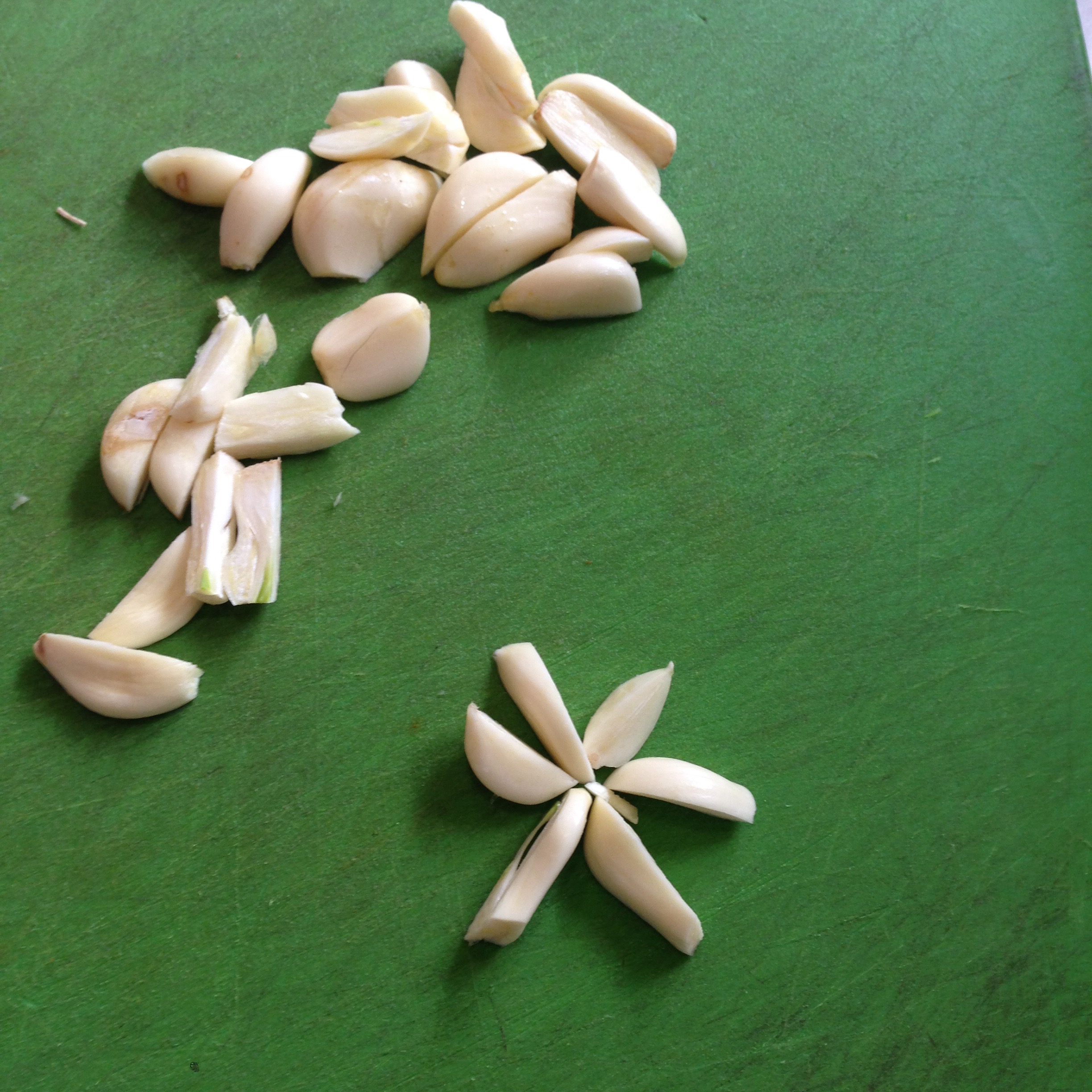 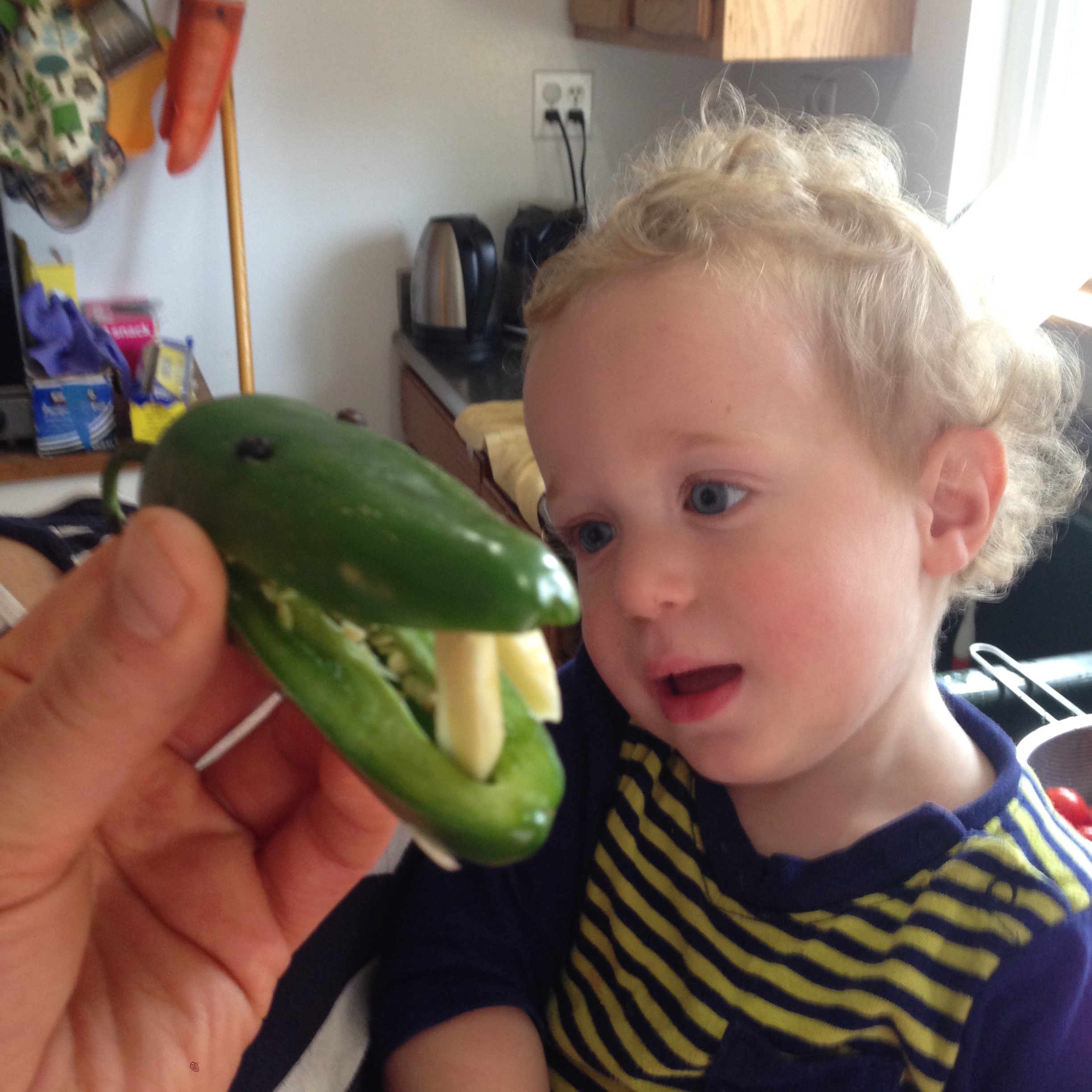 Next, heat up the olive oil on medium low while you remove the ribs from the jalapeno or chili pepper, and chop it up into cubes. Once hot, dump the garlic and pepper in the oil and sauté for about 10 minutes, until soft. 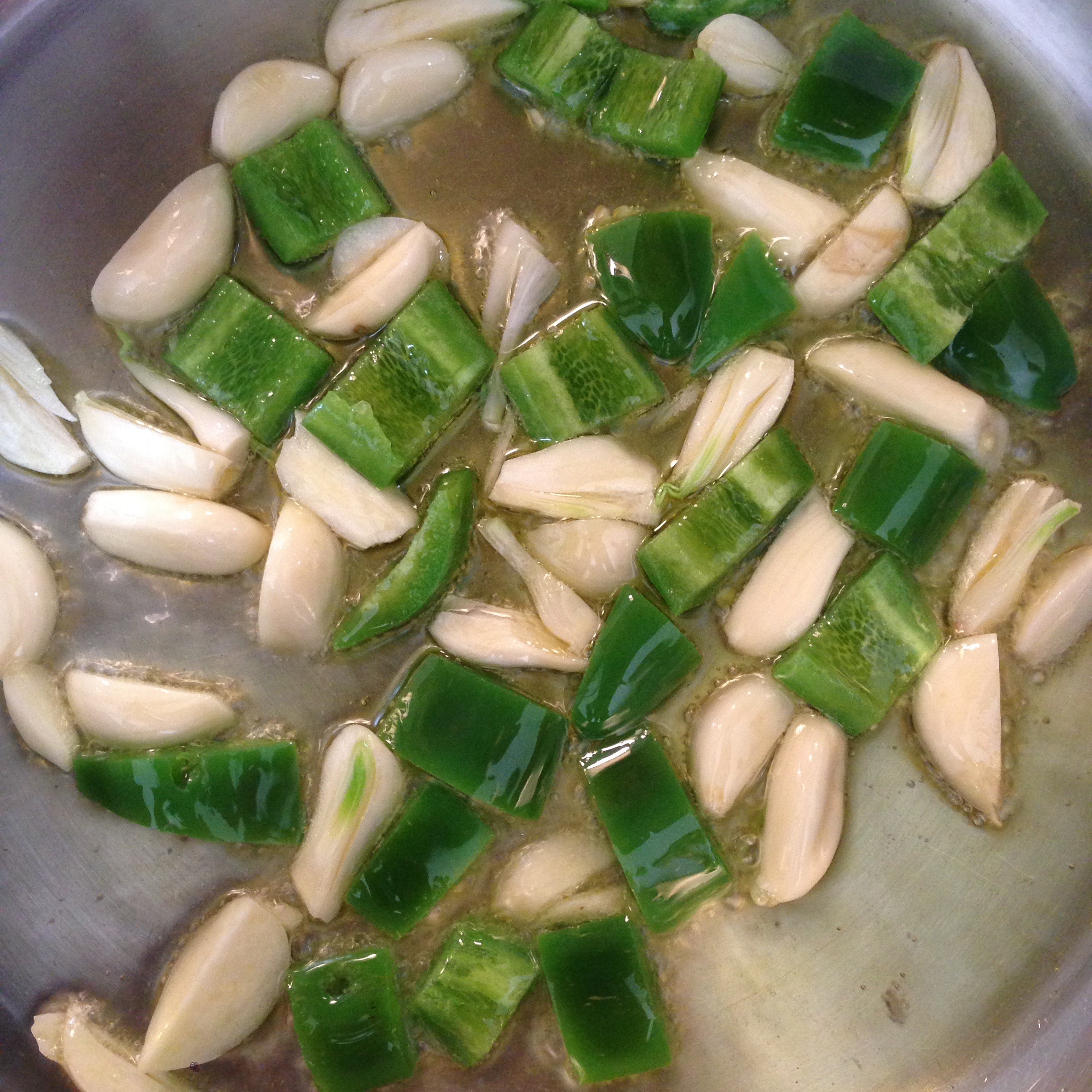 In the mean time, chop the tomatoes. If you’re using cherry tomatoes, just halve them. We used a combination of ripe romas and cherry. 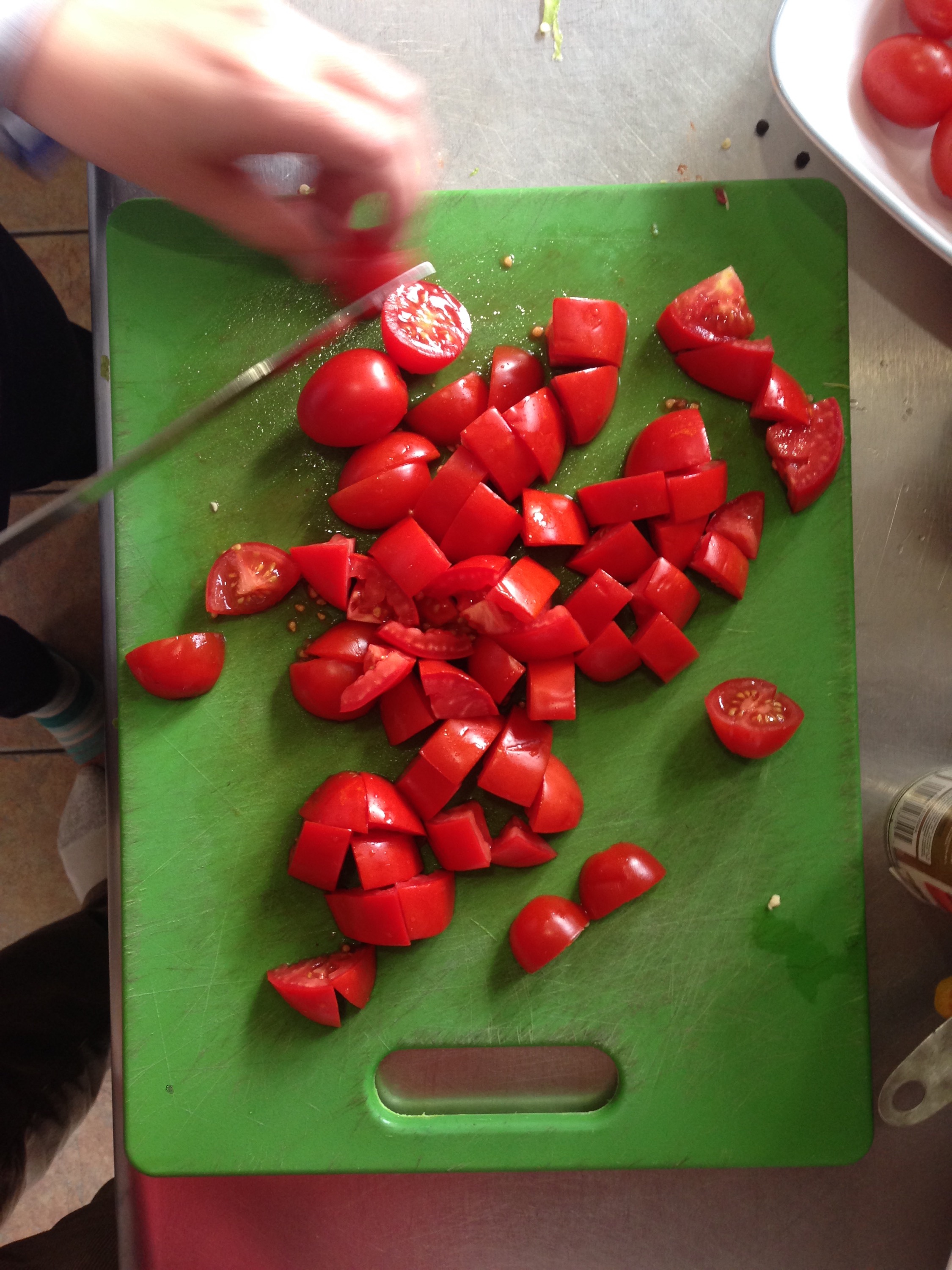 When the peppers are soft and the garlic fragrant, add about 1 tablespoon of tomato paste and mix. 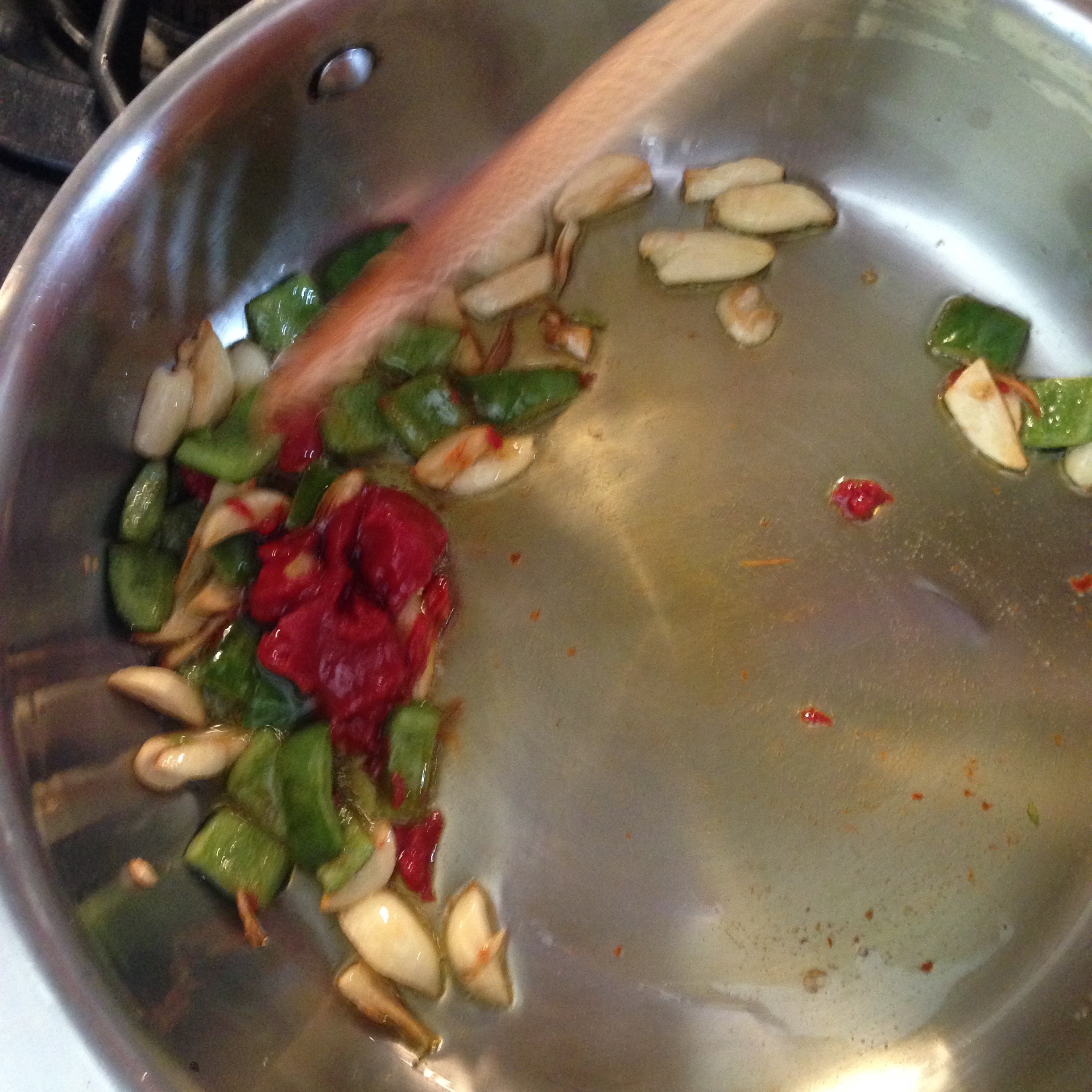 Add the tomatoes, a 1/4 cup water, the spices and mix. 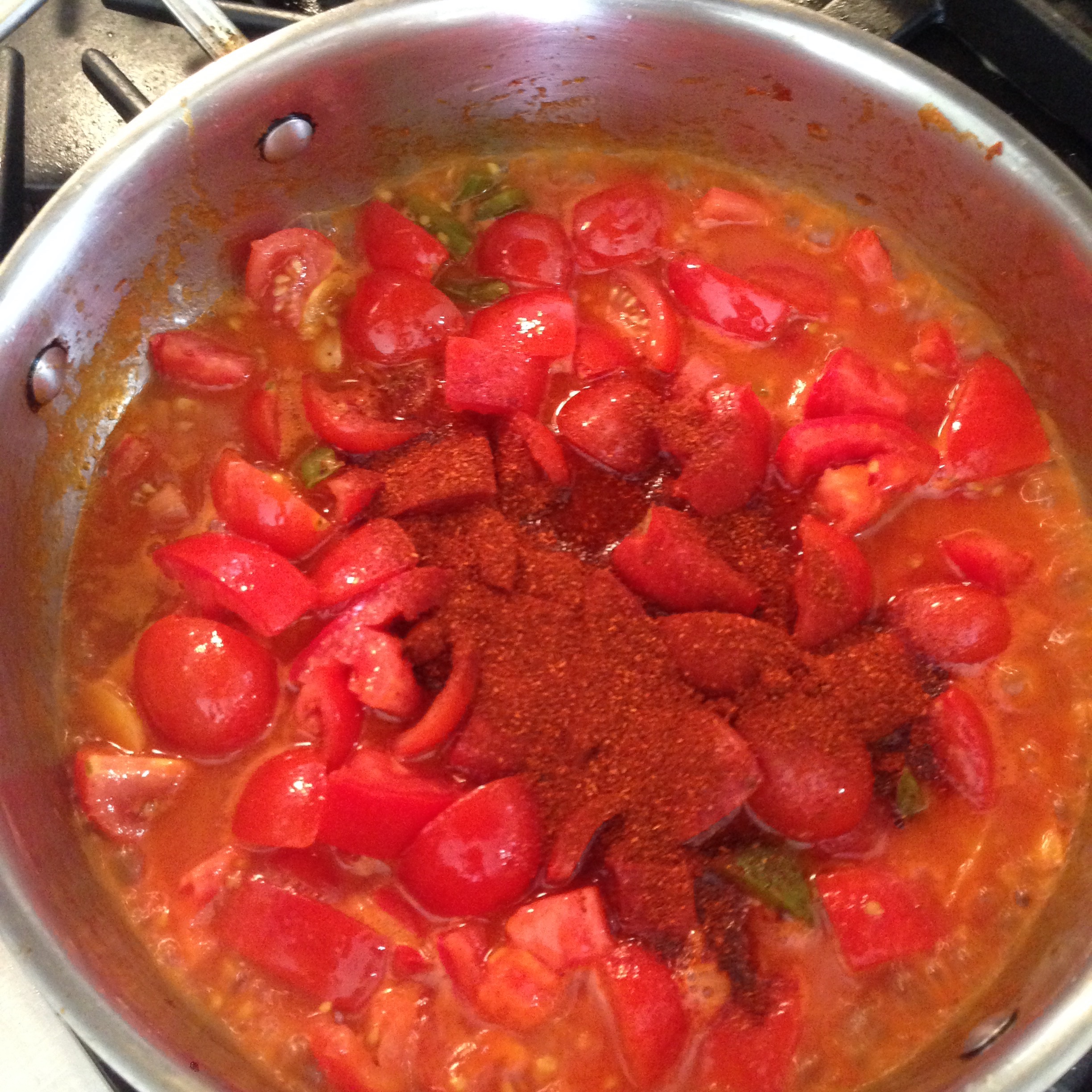 Cook covered, on low heat, for about 15-20 minutes until the tomatoes soften and start breaking apart. Carefully break onto the sauce 4-5 eggs (or as many as you like, keeping some room between each egg). 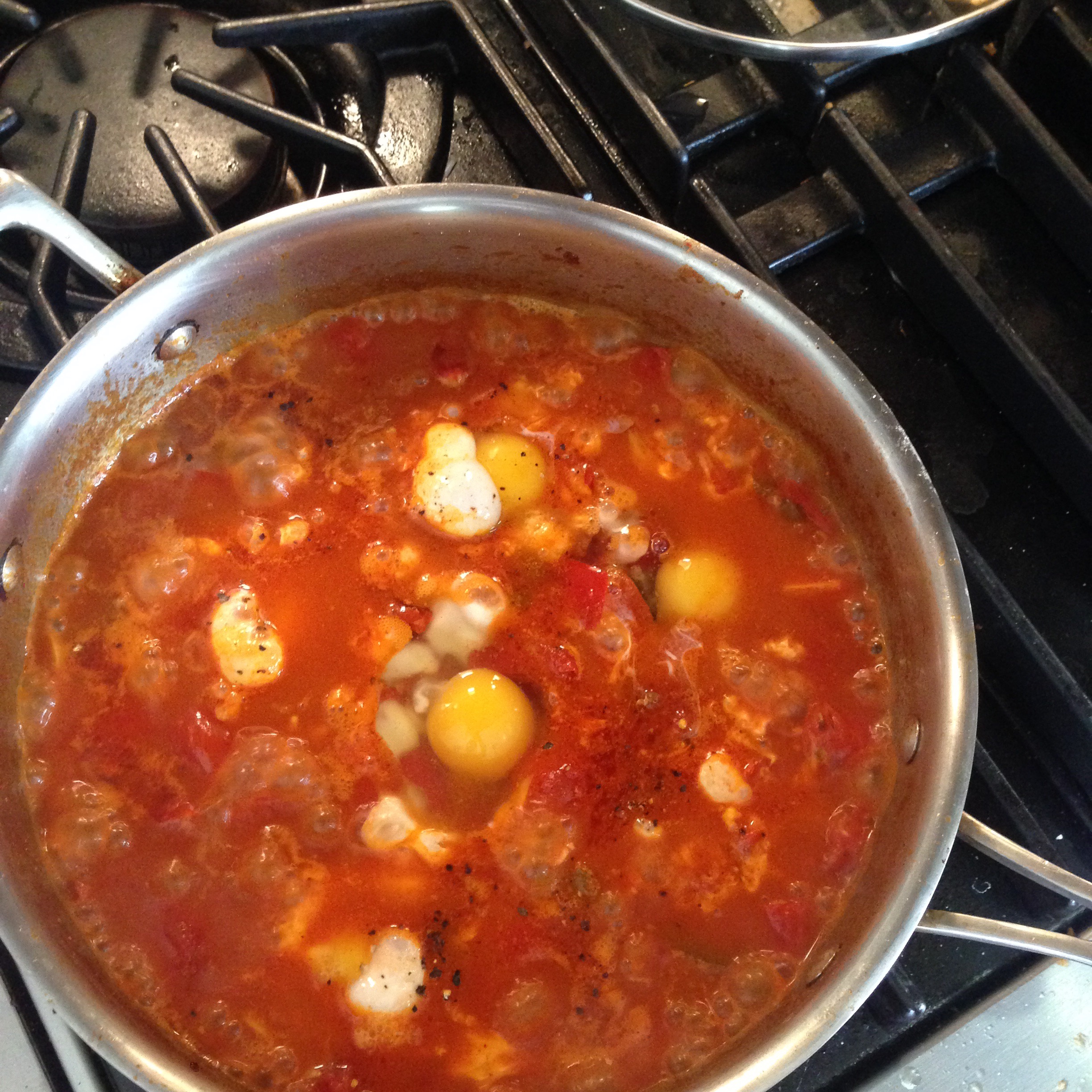 Put the pan in the oven under the broiler for 2-3 minutes and take it out. 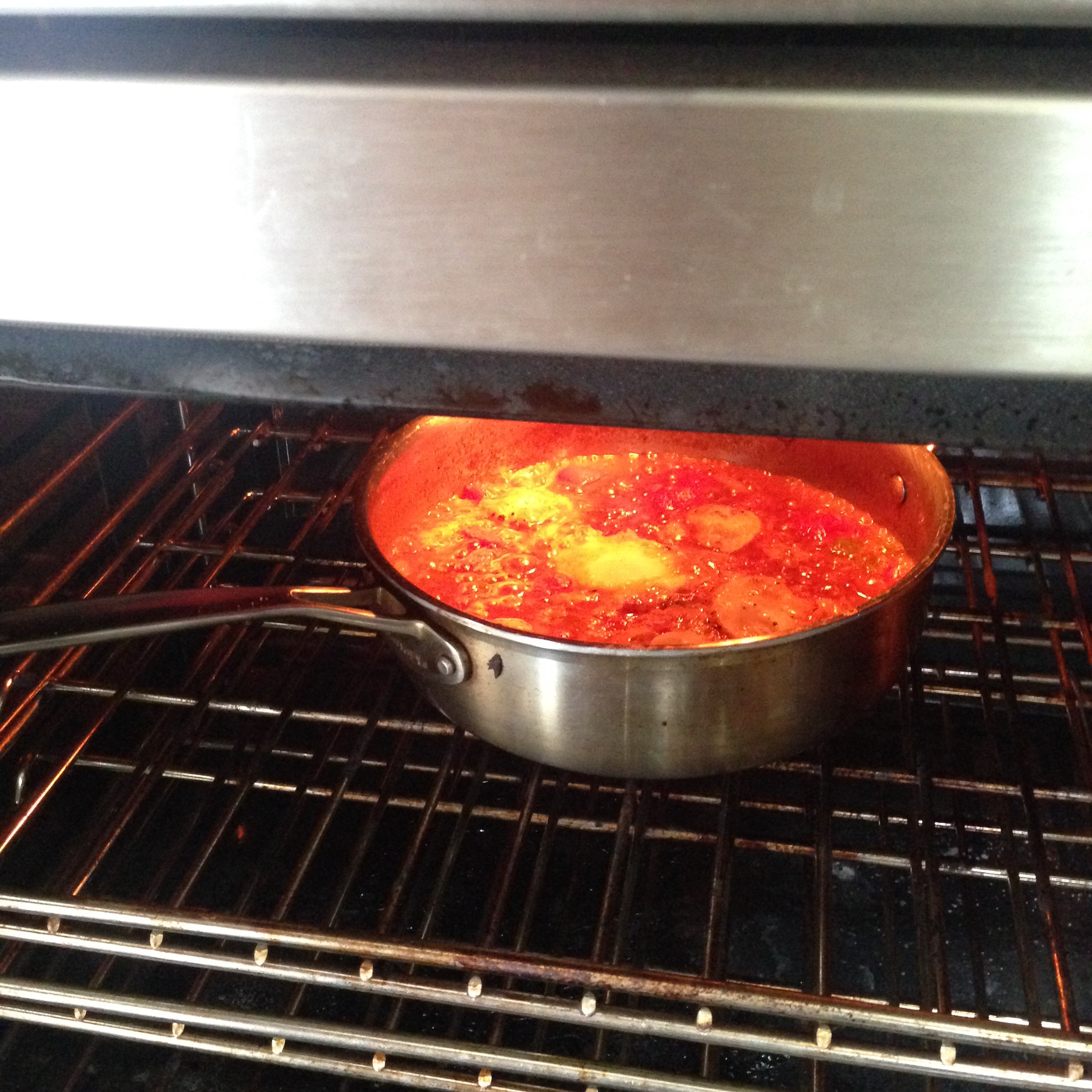 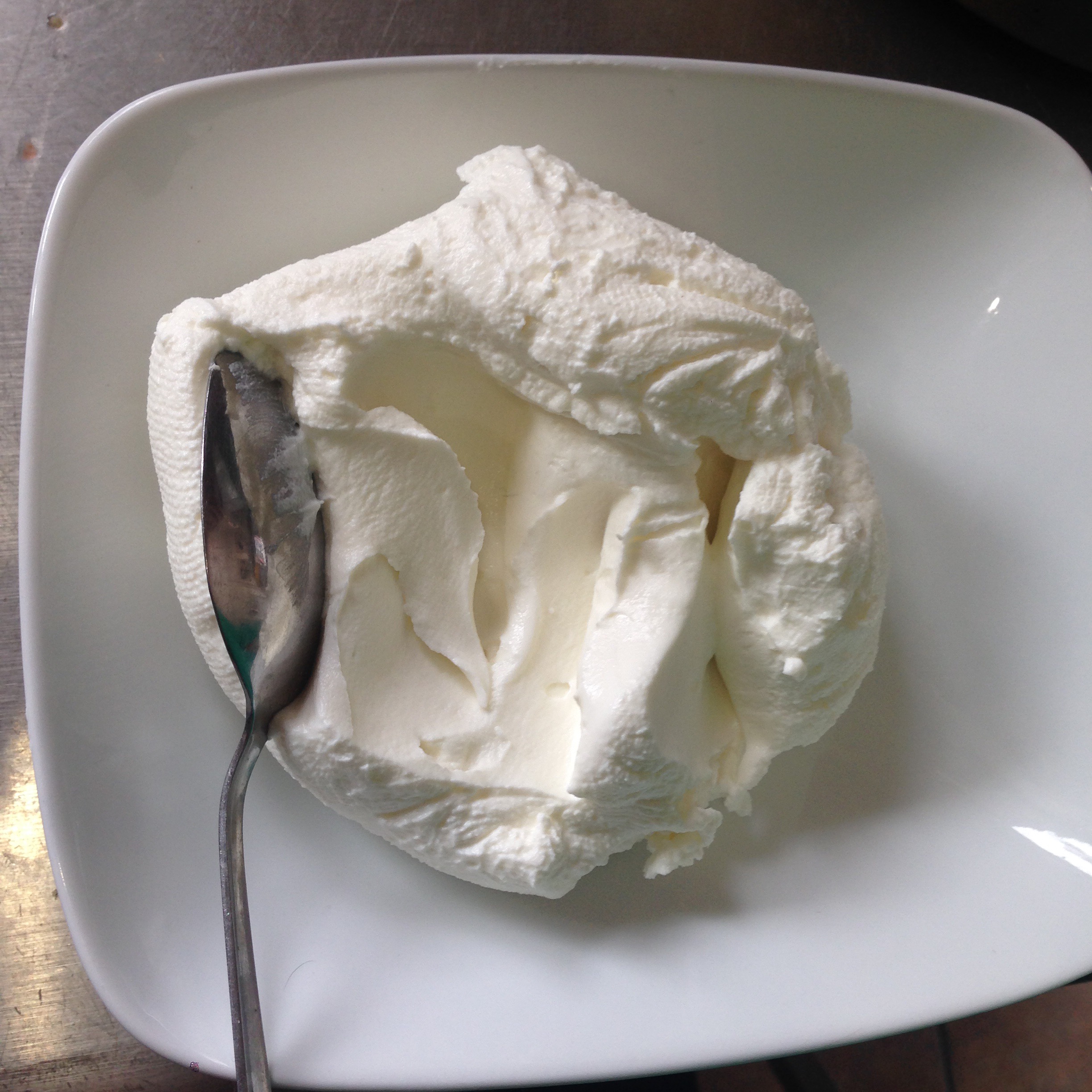 The labneh requires a little more planning if you’re making it yourself. Pour the contents of a tub of plain yogurt (preferably whole milk, non-runny kind) and a few pinches of salt into a sieve lined with cheesecloth and tie a knot at the top. Place the sieve over a bowl and let it sit in the fridge overnight. 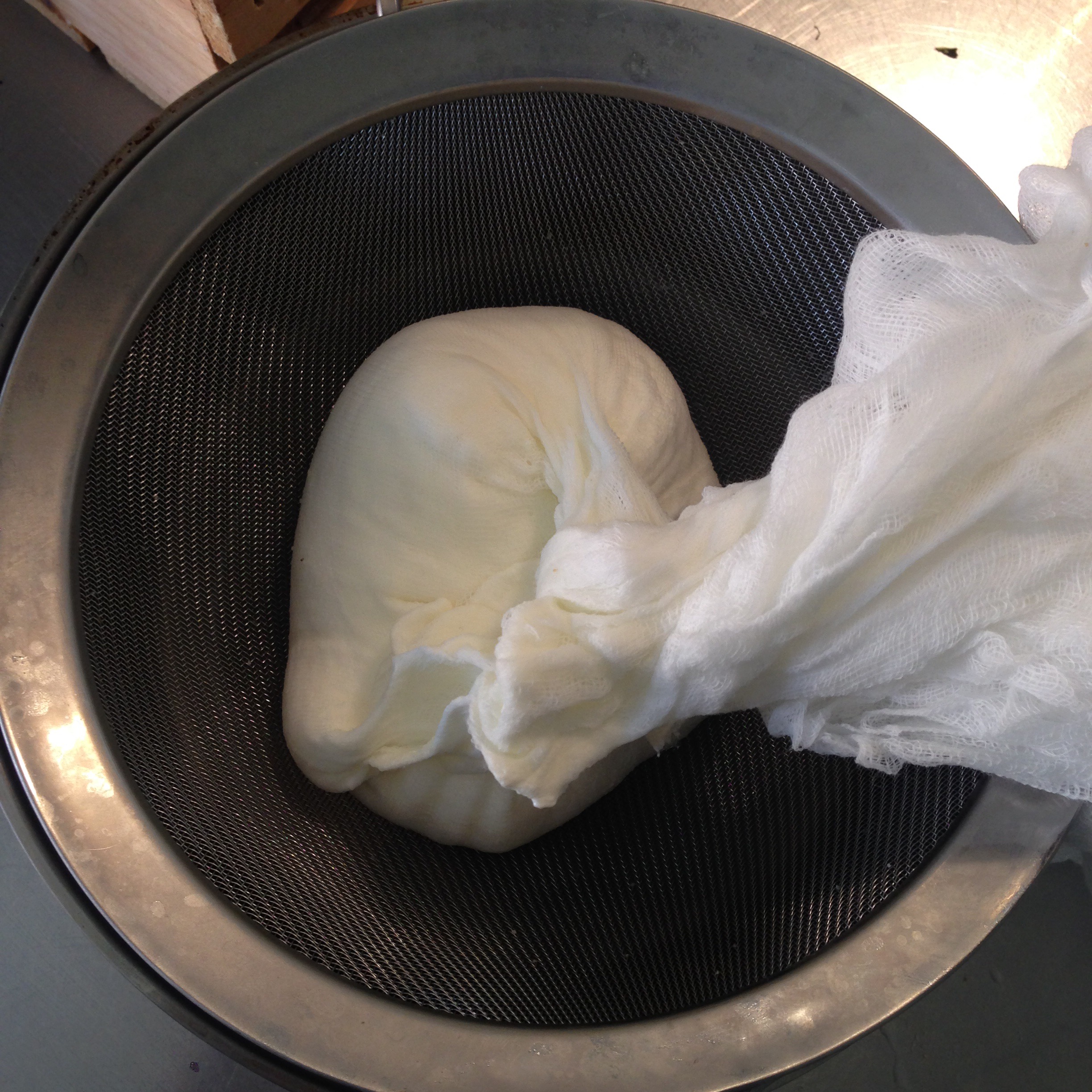 Spoon a bunch onto a plate or a bowl and give it the hummus swirl, and drizzle with olive oil and za’atar (authentic zaatar is hard to find in Anchorage, but can be purchased on Amazon. I always bring back a few bags with me from my visits home to Israel.) Here’s Yoel mastering “the swirl.” 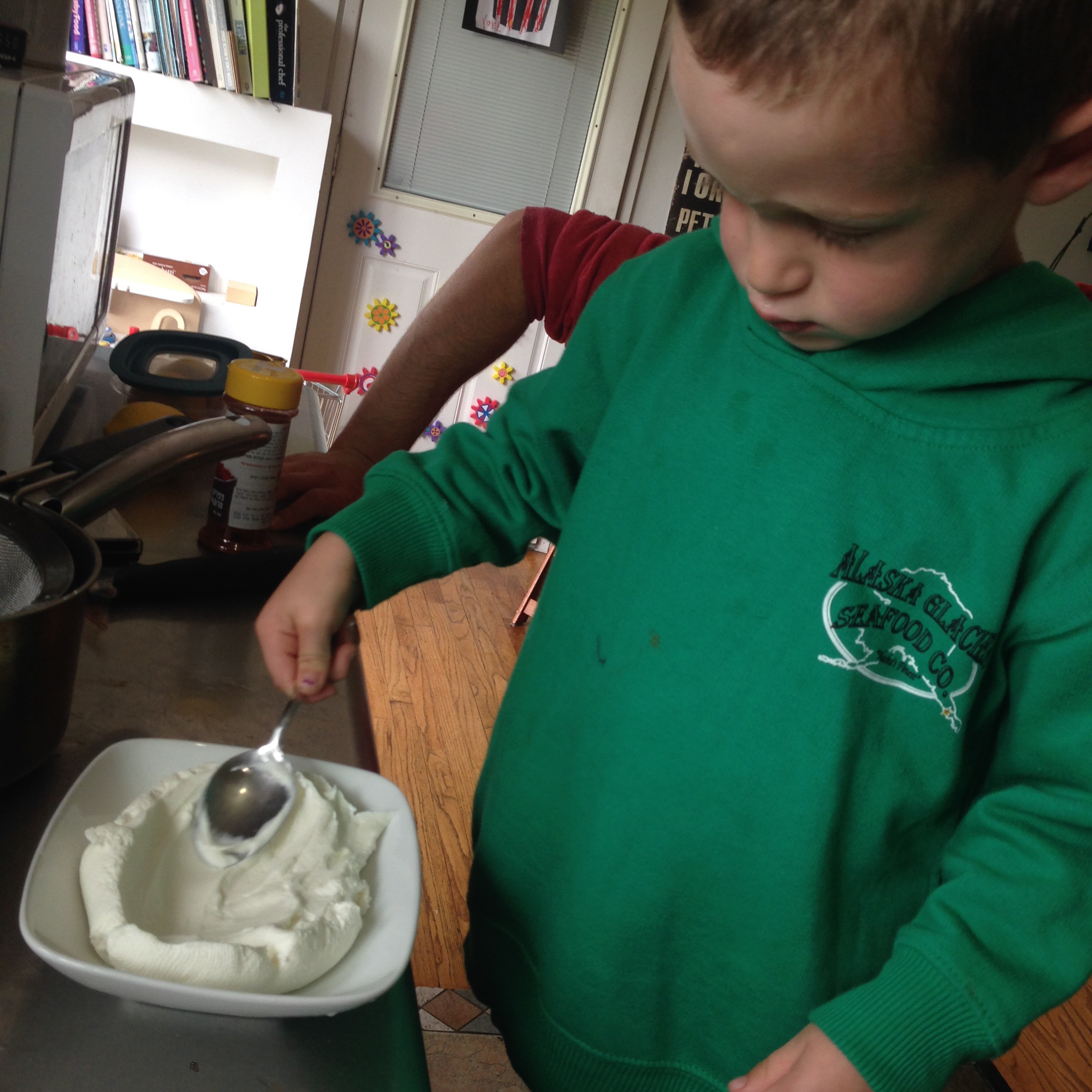 Cut up some pita, Challah or French baguette (Yum!), garnish the shakshuka with fresh cilantro and share with your favorite peeps. Here are mine, enjoying this feast with a side of Israeli pickles found in the pickle section at Sagaya or the Kosher section at Freddy’s. 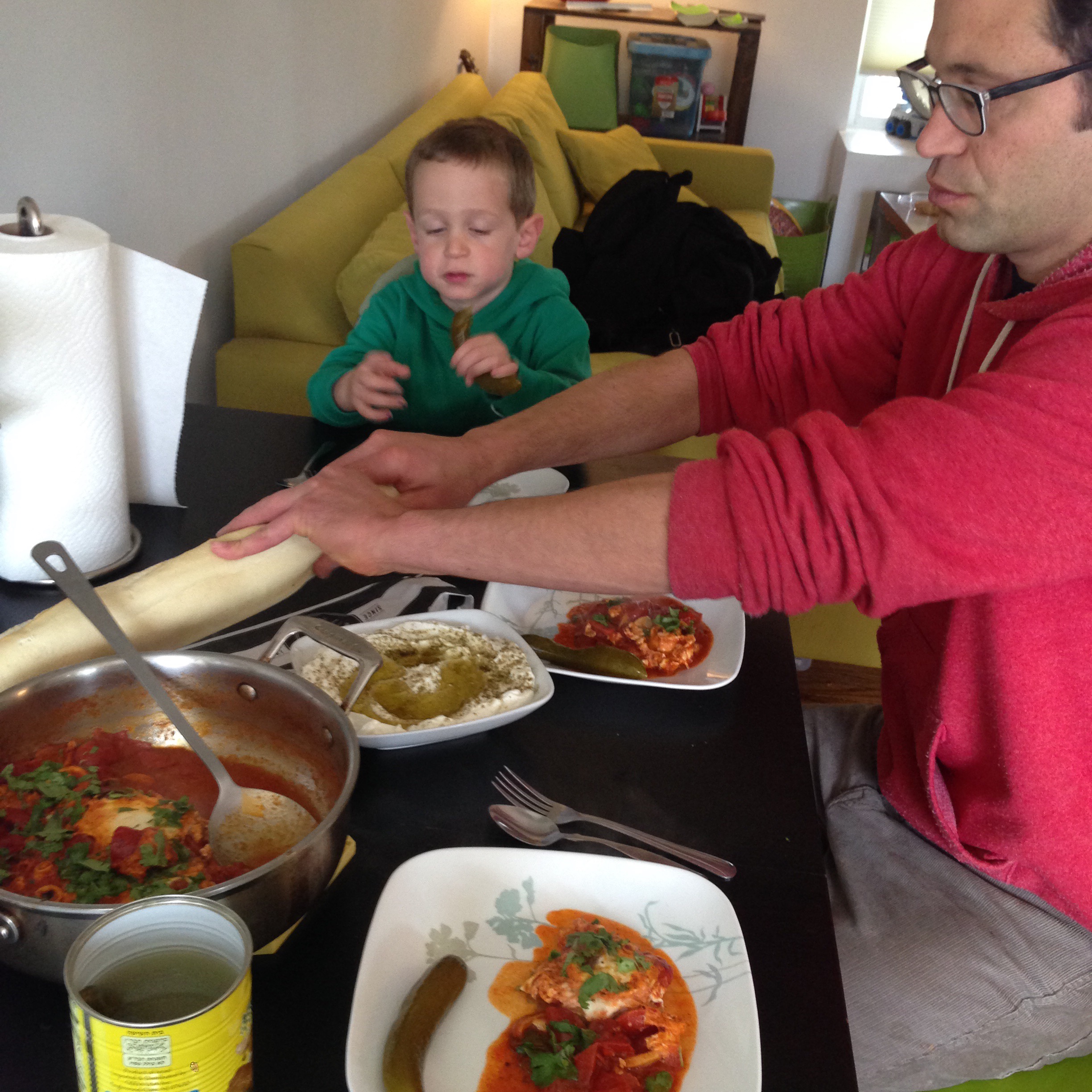 Heat the oil on medium low heat in a large sauce pan and sauté the garlic and pepper for 10 minutes until they turn soft and fragrant. Spoon in a tablespoon of tomato paste and mix it in. Add the diced tomatoes and stir till everything is combined with the paste. Add in the water and the spices and let it cook on low for 15-20 minutes until the tomatoes soften and the consistency is more chunky sauce-like. When the sauce is ready, gently break as many eggs as desired over the top and stick the whole pan in the oven, under the broiler, for 2-3 minutes. Garnish with plenty of fresh cilantro and serve with bread for scooping up the sauce and labneh.

Mix the salt into the yogurt, dump the yogurt into the cheesecloth-lined sieve placed over a bowl to catch the liquid, tie a not at the top and set in the fridge overnight to strain. Spoon the desired amount onto a plate and drizzle with olive oil and zaatar (or with honey and sesame seeds for a yummy dessert).

Noam and Tamar, originally from Israel, live in Anchorage with their two sons, Yoel and Uri, and their dog, Saul. They own Urban Greens, a downtown sandwich and salad shop, and used to spend many an evening cooking Middle Eastern and Mediterranean food together, until they had kids. Now they love eggs. 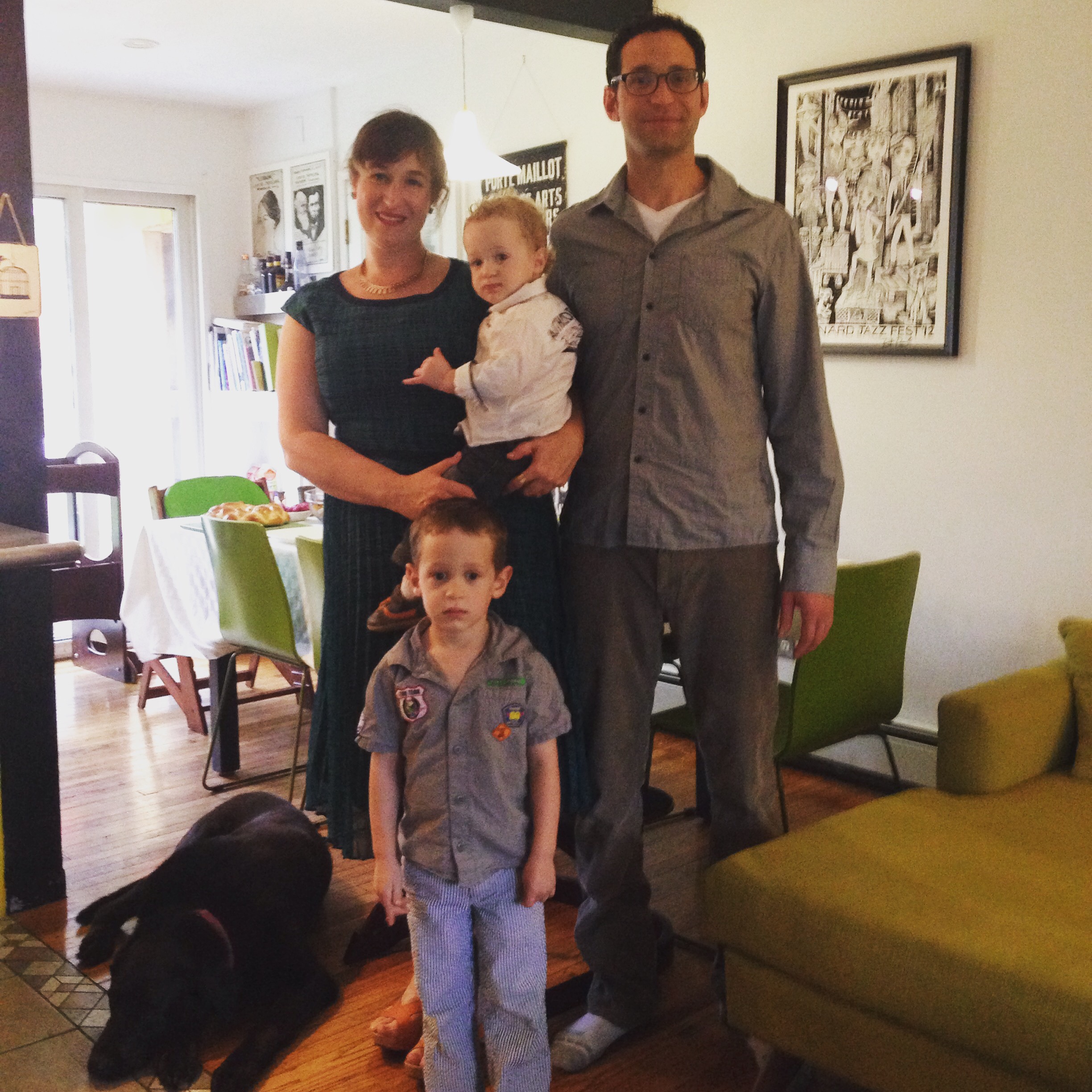 2 thoughts on “Family shakshuka breakfast with Noam and Tamar”