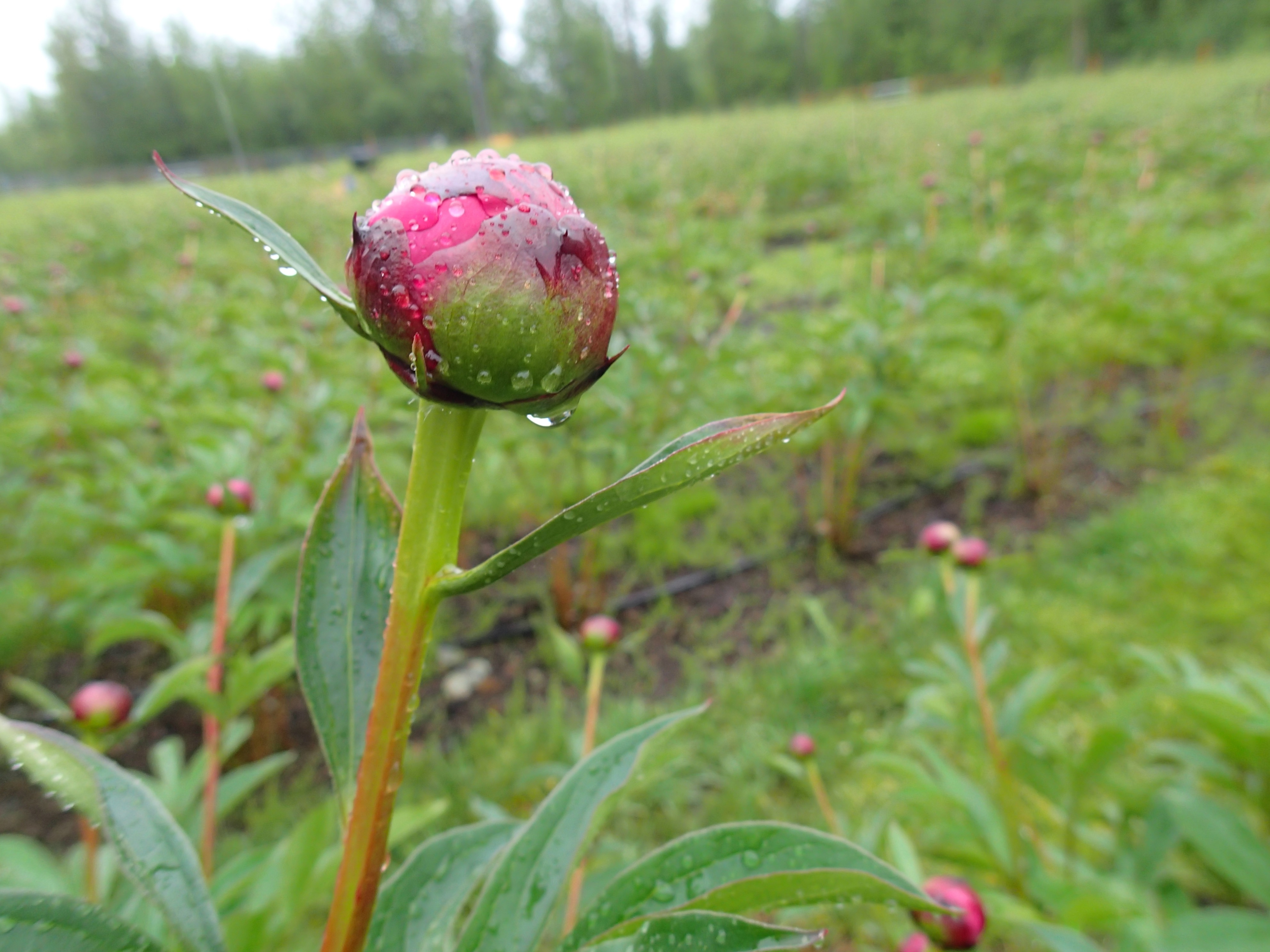 When my husband and I got married in July, 2007, purchasing peonies wasn’t an option. They were out of season. But I remember seeing Anchorage gardens full of the ruffly, aromatic blooms in July. I ended up using someone’s garden peonies for my own bouquet.

It wasn’t until August 2013 when I was leafing through an Alaska Airlines Magazine that I learned how unique Alaska peonies really are.

Peony farms have since sprouted up all over the state from Nenana to Homer and have cornered the global peony market from mid to late summer.

I recently had the opportunity to take a tour of Alaska Blooms Peony Farm and learn about these special flowers from owner Rachel Christy.

My son and I embarked on a rainy Sunday outside the city of Wasilla to a cabin where thousands of peony buds were growing in the front lot.

We were greeted warmly by Rachel and her niece, Harper.

This is Rachel’s sixth year growing commercial peonies. She became a peony farmer after attending a peony growers’ conference in 2011.

“I went to this garden conference and I thought it was for gardeners but it was really a farmers’ conference, a growers’ conference,” Rachel said. “And I got in there and realized this was about a crop, not just how to grow a nice peony, and so then it just hatched. I couldn’t stop thinking about it.”

She and her family decided to convert their lakeside cabin into a peony farm. It wasn’t easy, she said.

“It takes a lot of determination because it’s a lot of work,” Rachel said. “It was so hard for us to plant 1,000 [peony plants]. We have 3,500 here and it was so hard to get them planted – to get that done properly, mulch it properly, get the irrigation down.”

But all that work is paying off. Last year her farm sold 5,000 peony blooms and she’s hoping for even more this year.

It’s evident that Rachel is proud of her peonies.

“Every time I walk down my center aisle to come back to the farm I just stop and think, ‘It’s like Christmas.’”

Alaska Blooms sells only 25 percent of their harvest locally. The rest is shipped to wholesalers and florists in the Lower 48. But it’s the Alaska brides who prefer the bright, colorful varieties. The rest of the states go for the classic white, Rachel said.

Many of her blooms are now ready to be harvested and sent to a commercial pack house in Anchorage, where they get graded, packed, stored, and shipped.

Picking the buds at just the right time is a skill.

“It’s really kind of nerve-wracking,” Rachel said. “I try and get them when they’re soft.” If they are picked too late, they could open during shipping and that means florists won’t have time to arrange them for an event.

But if picked at the right time, the buds can sit in a cooler for four to five weeks before opening. Rachel and her family will harvest all their peony blooms by mid-July but will store them in the cooler until they sell out toward the end of August.

Although she sells most of her peonies to wholesalers and florists, she also sets up shop at the Wasilla Wednesday Market and plans to distribute to Aurora Village Carrs in Anchorage.

Rachel has some tips for extending the life of your fresh-cut peonies.

First, if you’re picking them for an event and you need them to stay closed, store them in a fridge, but be sure to remove your fruits and vegetables first.

“You have to be careful about what is in your fridge,” Rachel said. “Apples emit ethylene and that causes the peonies to open.”

Rachel suggests keeping your cut peonies in the fridge for 24 hours before arranging them. “You’ll get a longer vase life,” she said.