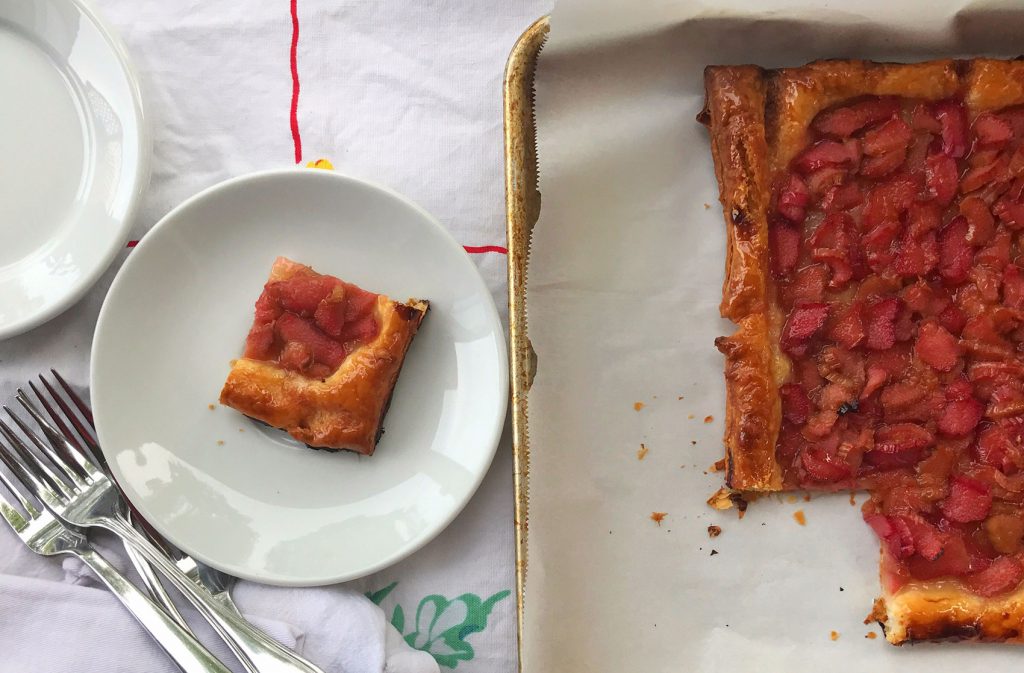 Could anything symbolize the impending abundance of our Alaska summers right now more than the ginormous rhubarb plants sprouting on the edges of our lawns? Heretofore begins the parade of rhubarb crisps, followed very soon by the parade of grilled red salmon filets. Salmon, grilled veg, salad, crisp/crumble with its sweet oatmeal topping. It is my little black dress of casual summer dining. 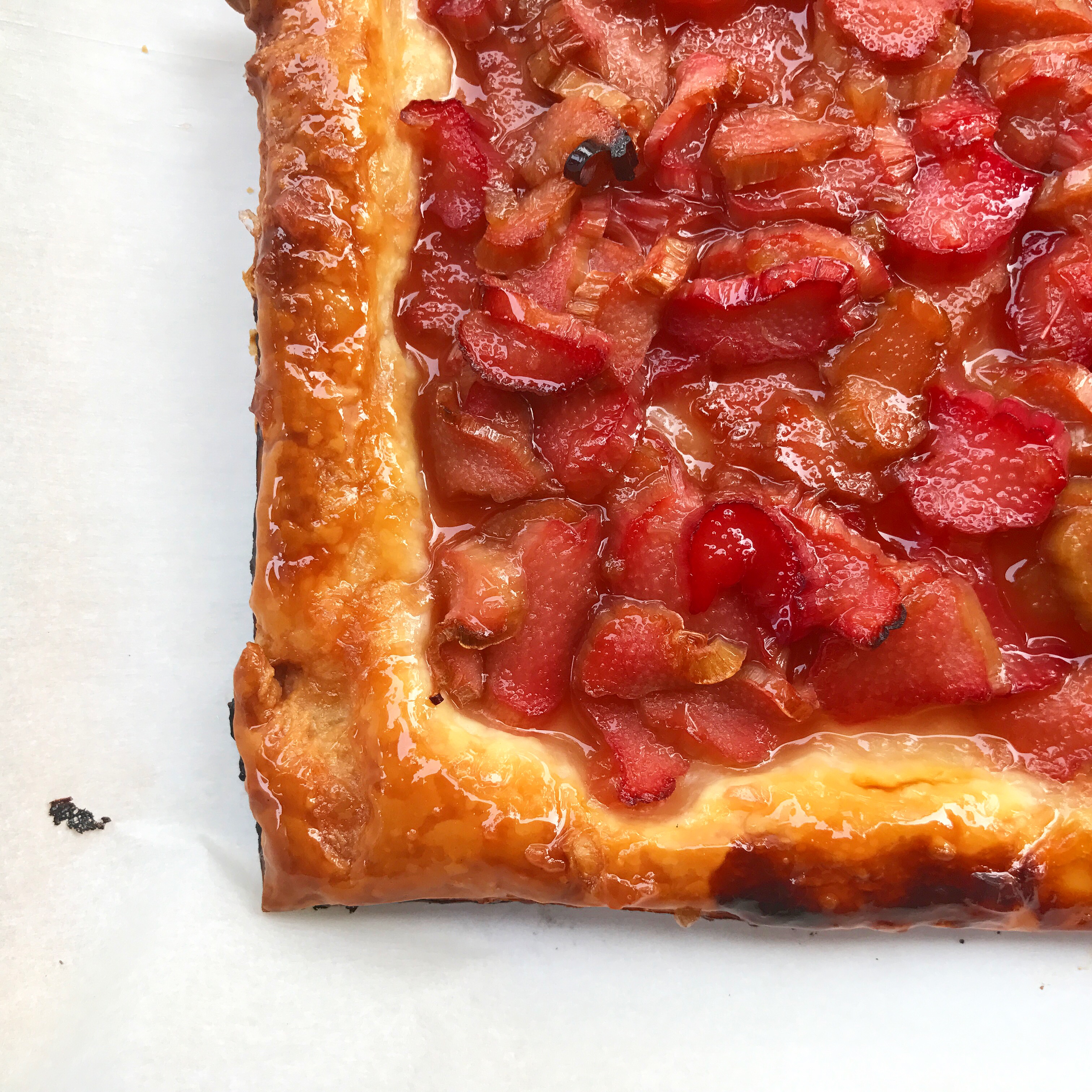 But, maybe, tonight, you want to mix things up. Maybe you want to make a dessert with all that rhubarb that is just as easy as the traditional crisp, goes great with ice cream, but breaks the routine (and isn’t too sweet, either).  Here, my friends, is your recipe. It requires only a little planning. You have to pick up a pastry sheet. (Oddly, my favorite ones are at Walmart in Anchorage, next to the canned crescent rolls.) If you have a frozen one, you need to remember thaw it, which takes a day on the counter. (Look, I totally didn’t make that piece of buttery dough down there. Nope, not homemade, Pinterest. ) 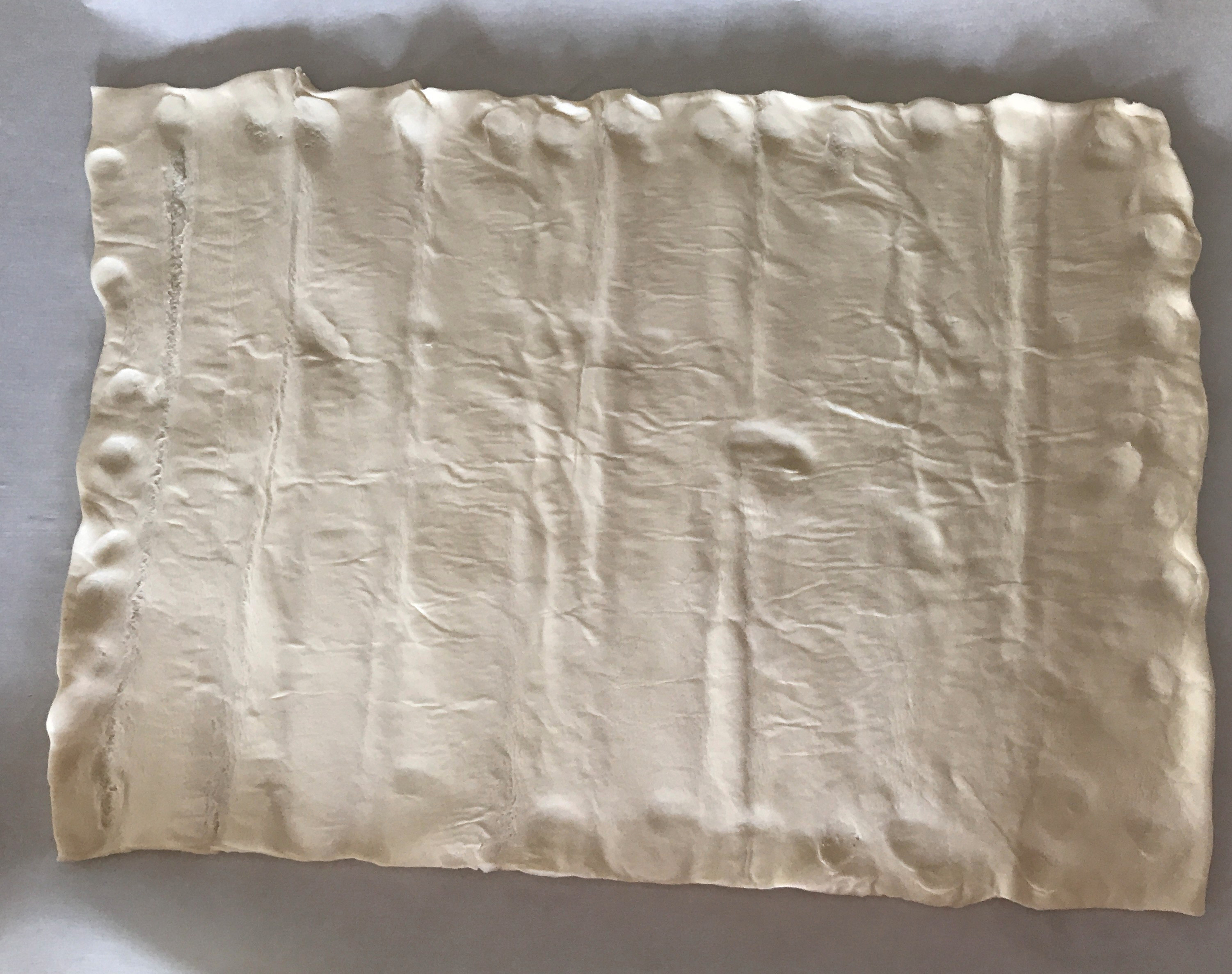 And, you have to let the rhubarb soak for at least a half hour in the orange juice. 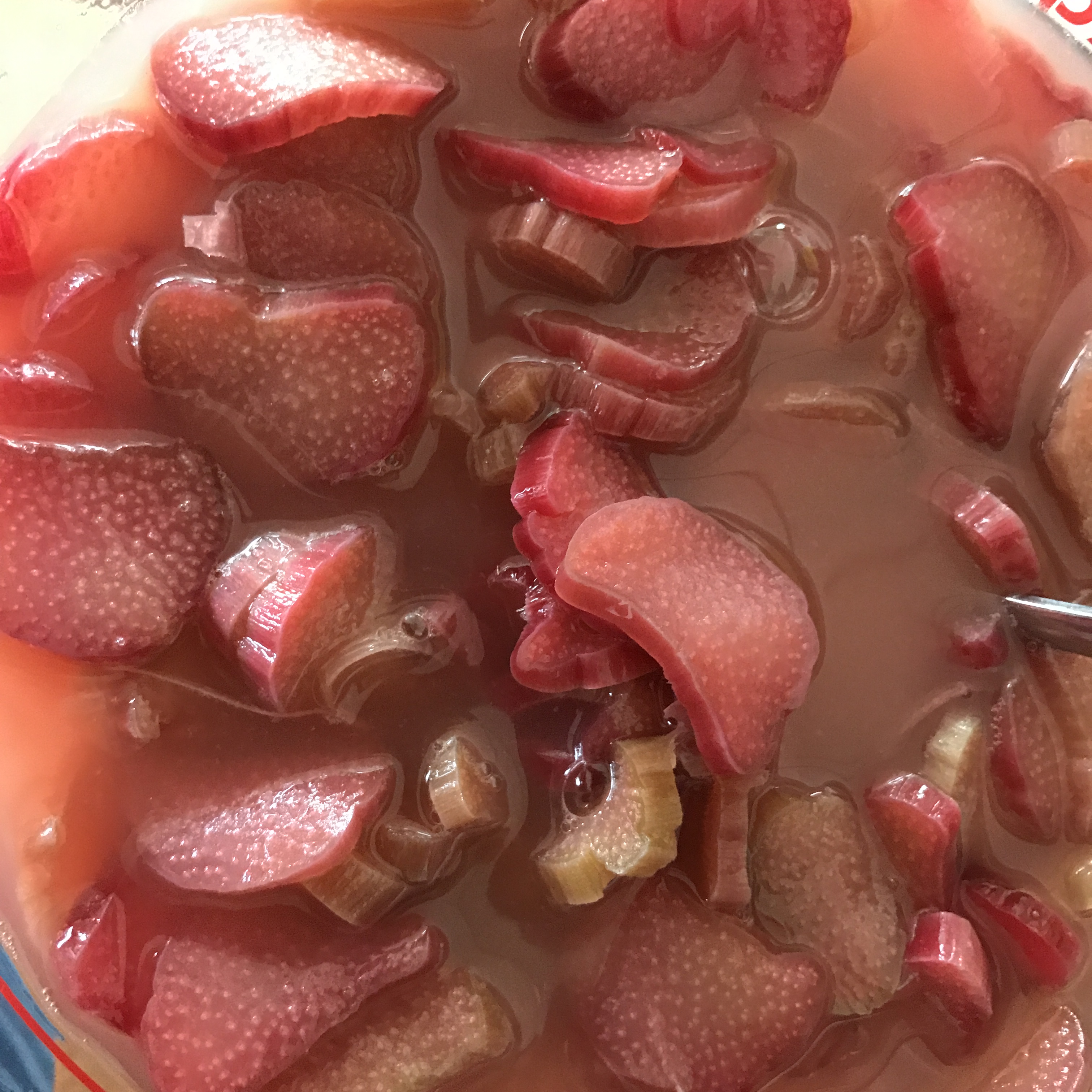 If you do all that, the actual assembly of this dish might be a tad faster that crisp. The result is great AND it doesn’t require a truck load of sugar. This makes a wonderful brunch dish as well . Serve with whipped cream or ice cream. 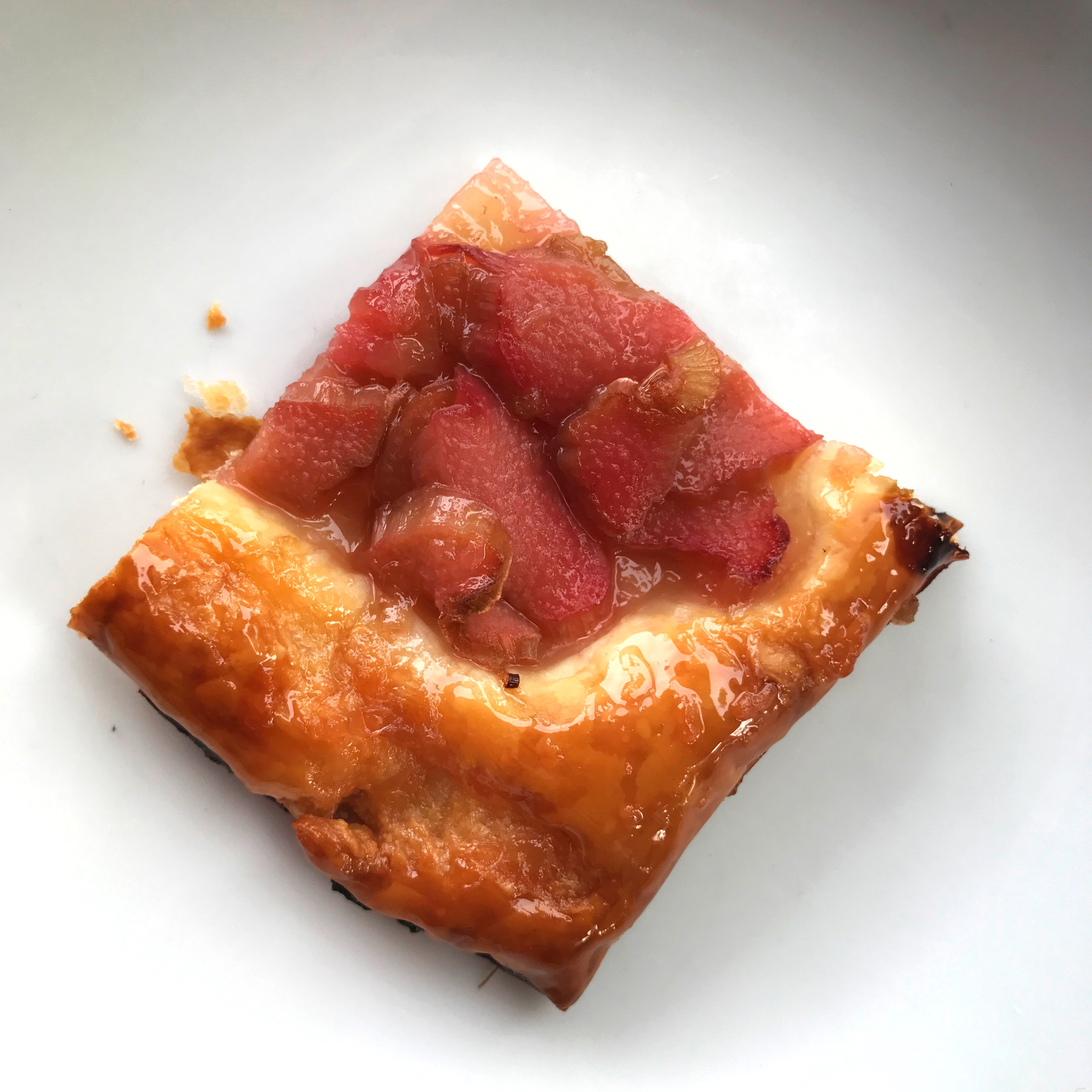 At least 30 minutes ahead, stir the sugar into the orange juice and soak the rhubarb in the mixture. (If you’re using previously frozen rhubarb, just soak it for 10 minutes.)

Strain the rhubarb, catching the liquid in a saucepan. Set that on the stove on medium heat.

On a parchment-covered sheet pan, unroll pastry sheet. Arrange the rhubarb slices in a thin layer on the pastry sheet, leaving a border all the way around the edge. Slide in the oven and bake for 28-30 minutes.

Meanwhile, simmer the soaking liquid, stirring occasionally, reducing to a thin syrup. Pull the pastry out. (It should be a rich golden color around the edges.) Generously brush the whole thing with the syrup a couple of times. Sprinkle with orange zest. Serve with ice cream or whipped cream. 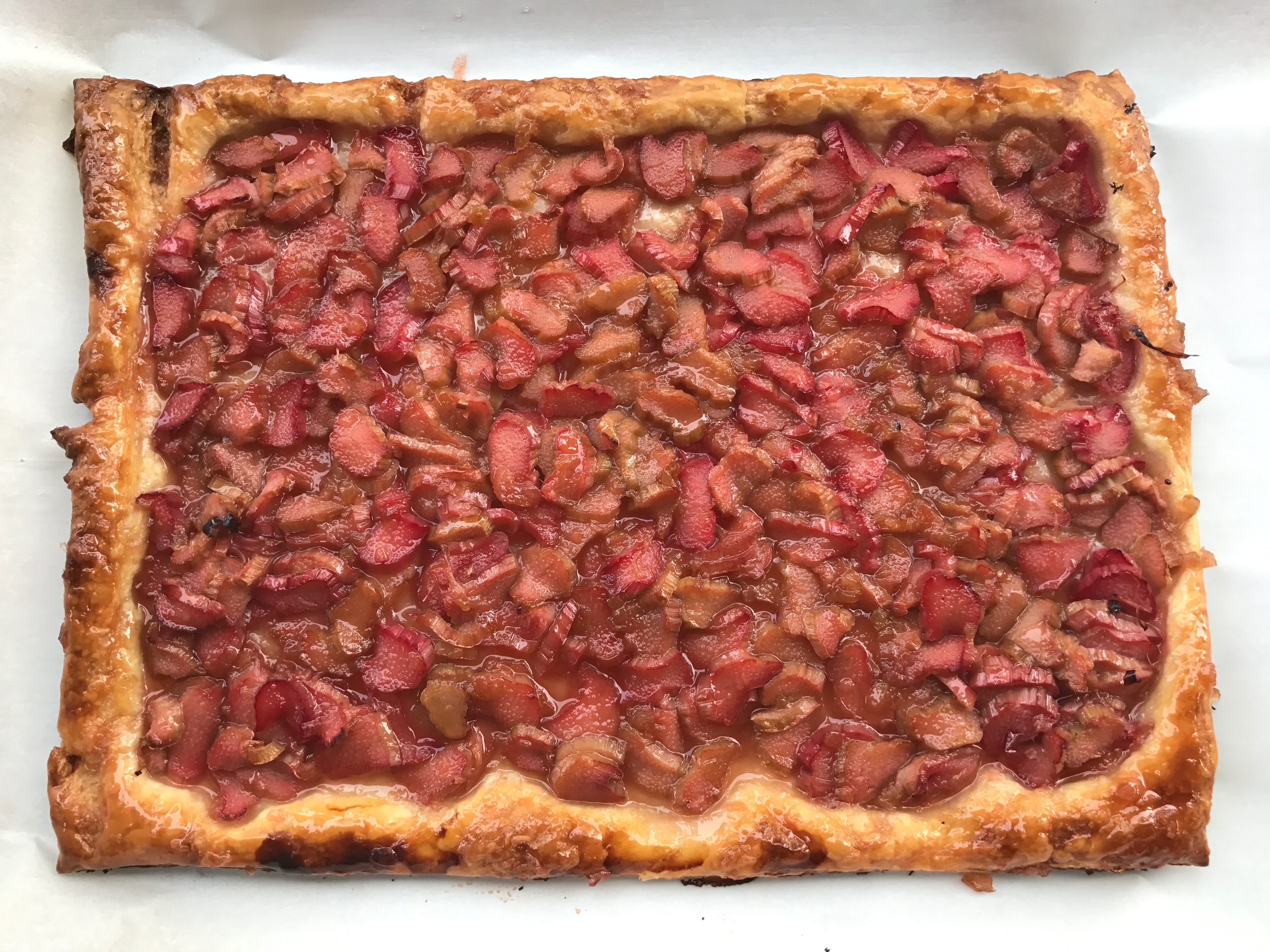 One thought on “Quick Rhubarb Pastry”